The concept of Bullish Percent is great. From a group of stocks, you calculate the % of stocks on a buy signal. The rest are on a sell. With PnF charts as the basis for Bullish Percent calculations, penny moves don't matter as in New Highs or the Advance Decline line. There is a mid range that the signal does not switch back and forth in bullish percent.

So the Bullish Percent chart shown below has some interesting traits. It looks detailed but let's cover it in simple concepts.

When the market breaks out to new bullish levels, the BP surges above 70.  Generally, it takes a while to kill the bull, so as the rallies proceed, each rally weakens. When the BP tops are trending lower, the recovery bounce levels are pretty important. When the market stays nice and high and the bounces are well above 70, most pullbacks are shallow.  Rallies that don't get back above 70 are weak. I marked those four rallies with green arrows. The mid year rally in 2005 and the fall of 2012 both had rallies with higher lows than before. 2010 was an exception that it fell from the very top.

Looking at the RSI, only one major pullback happened straight off a strong RSI. That was in 2010. All the rest had weak or brief RSI 70 signals near the top. 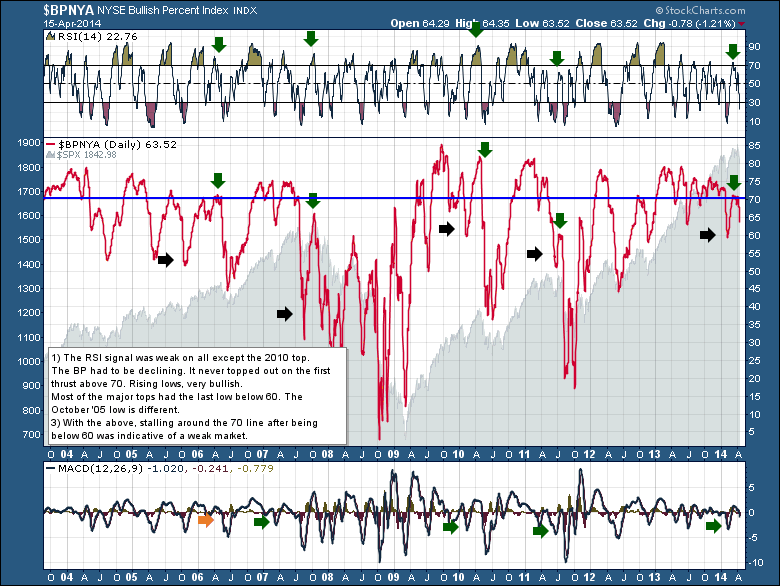 We can clearly see the lower low on the BP index in 2014. The MACD made a strong drop and then bounced up which seems to be a requirement but there are too many to use that as a help.

Lower highs and lower lows (60 level as shown in black) on the BP index are cautionary. A weak RSI on the follow-on bounces adds more caution. Lastly, a top on the BP Index at 70 or below (shown in green arrows) is very cautionary. The 2010 top is an exception.

Let's compare that to the Advance-Decline line. 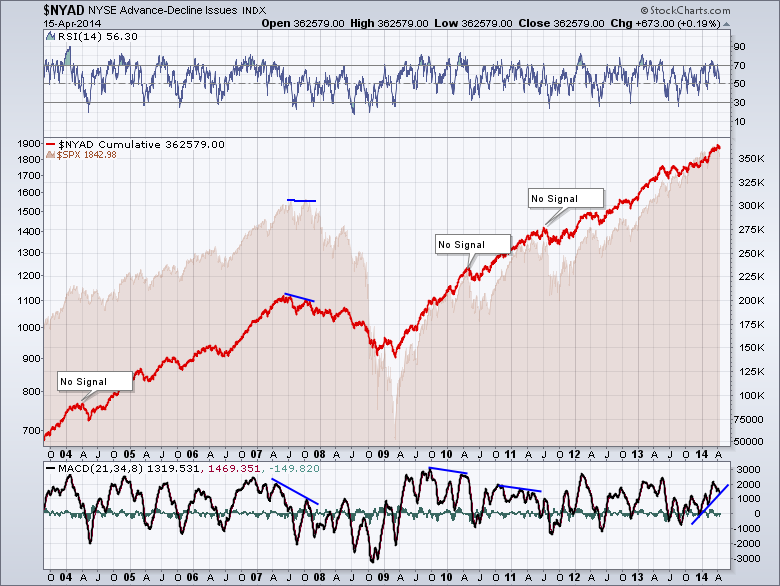 The MACD provided the best signal in 2007. There was also some divergence on the MACD for the 2010 and 2011 tops. Currently, there is no divergence on either the $NYAD or the MACD compared to the $SPX price action.

I think it helps that the $BP index doesn't add into the total unless it changes a signal from sell to buy. Otherwise the percentage stays the same as the day before. If I have my facts straight, if a stock was marginally higher by a couple of pennies, it would add into the $NYAD cumulative but not the Bullish Percent. It would add to the bullish percent only if it moved enough to change the signal from sell to buy.

The Bullish Percent chart is at a critical level. If the market bounces here over the next week, it will be important to see if enough stocks can rally to break the trend we are seeing.

Lastly, Chartcon 2014 in Seattle is rapidly booking up. I noticed Chip offered a signed copy of John's new book to the first fifteen signups starting today.Click here for more information.