The $VIX chart says its business as usual out there. I have a lot of signals that say the interim top is in. The main signals would be the breadth charts but the $VIX is always considered the fear index. I don't trust the $VIX as much as it is traded as an investment vehicle and it affects the price of options. However, the fear index is suggesting you continue on. Nothing new to see here. I would suggest it is in a zone of interest more than an actual signal one way or the other currently. Let's review the chart. 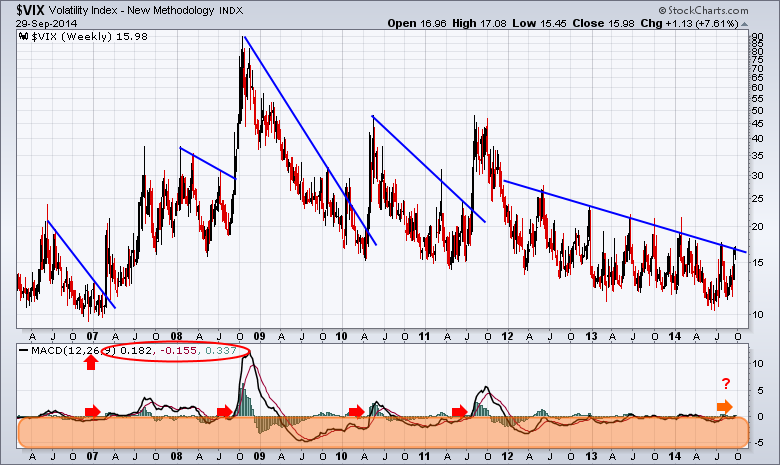 Because the actual data is so spiky, it is great for short term but no so good for long term analysis. There is one way I like to use the $VIX for longer term analysis. Looking at the weekly MACD, if it moves and holds above the zero line, it is a time to be more cautious. Sometimes it just rolls back over like in 2013. However, sustained periods above the zero line mark periods of major pullbacks in the $SPX.

So I have circled the values for the MACD in the red circle. The first number shown in black is the actual MACD value. It is now positive so it is above the zero line. The second value is the signal line and it is below the zero line, which is indicated by the negative value. The third number shown in green is the difference between the MACD value and the signal line. It is positive meaning that the MACD has crossed above the signal line. If all three get above zero, it should heighten our awareness. More importantly, it should allow us to buy options before the big moves take place. We can see in 2007, a series of higher lows marked a change in trend. But waiting for the October 9th market top would have been hard. Most of your portfolio would have had big drawdowns already. The MACD was positive from March 2007 onward.

So today the MACD is above zero. It is in a zone of interest and investors should be aware if this starts to live above the zero line.

I will be doing a webinar Thursday October 2 at 4:30 EDT and 1:30 PDT. My plan is to cover off the breadth indicators that have triggered signals based on my analysis. I will post the webinar link on Thursday.