There hasn't been much positive news to tweet about at Twitter (TWTR) lately.  In the midst of its downward spiral in price action, CEO Dick Costolo announced he would be resigning from TWTR and TWTR's co-founder and Chairman Jack Dorsey would take over.  The problem here is that Dorsey is already the co-founder and CEO of Square, another internet company that is having major financial issues, to say the least.  Technically, TWTR is at a crossroads.  Price support currently resides in the 35-36 area as that level has held on a few other bouts of selling.  Should TWTR fail to hold this support, it would likely head down to test its post-IPO low at 29.51.  Its lowest close is at 30.50.  Wall Street was initially impressed by the news that there'd be a new CEO next month as it gapped higher to 36.90 on Friday, but it took the company very little time to maneuver its way back into the 35s - and it did so on very heavy volume.  Technically, TWTR needs to close above its falling 20 day EMA before it's even worth considering for a trade on the long side.  The performance of the internet index ($DJUSNS) is plotted behind TWTR's price and you can see the significant divergence over the past 45 days.  There also appears to be more room to the downside on a relative basis vs. the DJUSNS and the S&P 500 before relative support is tested.  In the meantime, tweet on! 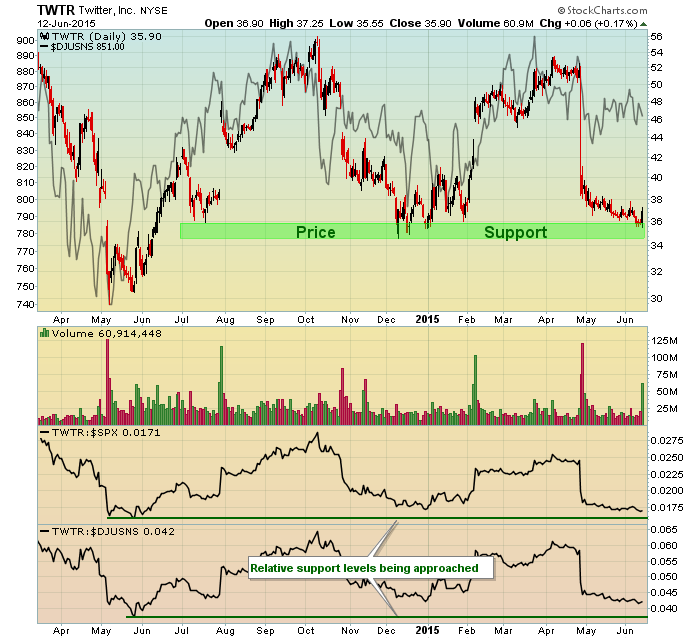