Microsoft reported outstanding earnings numbers yesterday and launched the stock near all-time highs this morning. After Satya Nadella took the floppy drive from Steve Ballmer on February 4, 2014, the stock ran up from $37 to $50. Since November 2014, the company stock has been range bound with a recent ceiling on the stock. The resistance of April to June 2014 became support once it broke through. Today broke through the 1-year Satya Nadella consolidation and support looks to be the $49 level now. 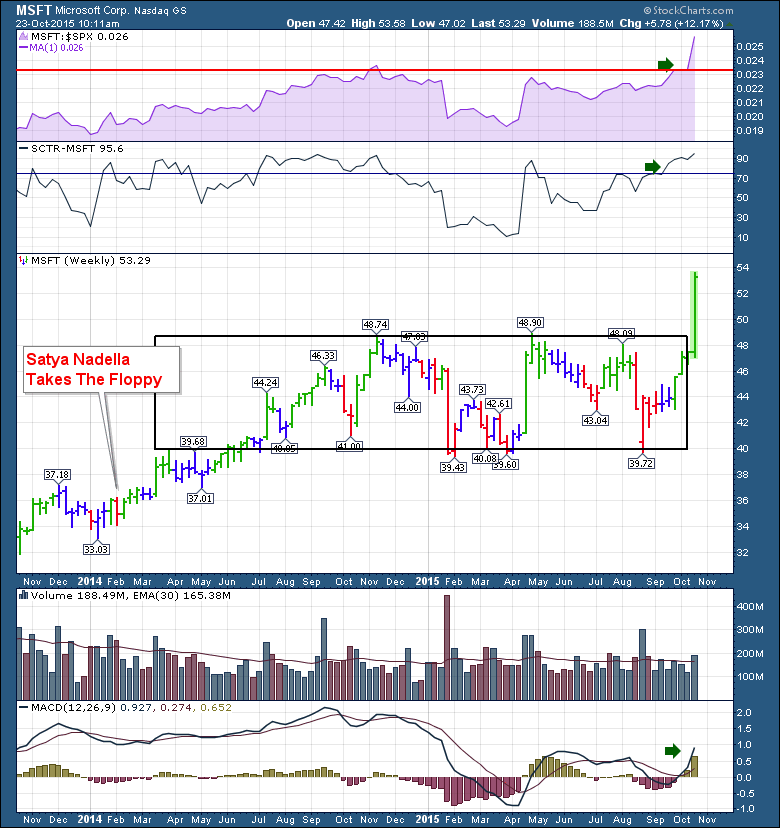 In what could only be termed Back-to-the-future week where the Delorean time traveled from 1985 to 1955 and October 21,22,23, 2015, routinely, Microsoft has some close ties. Microsoft was preparing to go public in 1985 when the film was also preparing to go public and MSFT started trading on the NASDAQ on March 12, 1986.  Microsoft's timeline would have had 15-year jumps in the timeline.  Going back to when Bill Gates was in high school, to the launch of the public IPO, to the great top of 1999 and now retesting those previous highs. After launching into the stock market with one of the strongest and longest stock runs, Microsoft topped out in December of 1999. It has been a long basing exercise since then. Satya Nadella is the new leader of the window to the world company and he appears to have the moxie of Marty McFly at his best. This looks investable when you can find an entry. This no longer looks like anything floppy. Happy back to the future week! Would they use a Tesla now?