It has been a rough two and a half months for the stock market with a major segment underperforming and one key industry group lagging.  Semiconductors, however, are emerging as leaders within the technology sector. The major index ETFs are all down since the end of July with the S&P 500 SPDR (SPY) losing around 3% and the Russell 2000 iShares (IWM) falling around 6%.  Small-caps are down much more than large-caps and this key segment is showing relative weakness. The Dow Diamonds (DIA) is down the least and holding up the best over this timeframe. 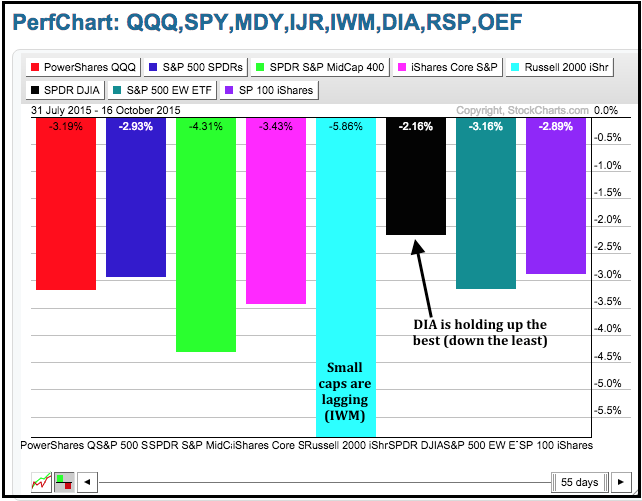 I picked the period from July 31st to mid October because the market turned down sharply in mid August.  Anything positive on this PerfChart would be trading above its August high and showing some serious relative strength over the last two and a half months. The second PerfChart shows ten industry group ETFs and only two are up: the Semiconductor SPDR (XSD) and the REIT iShares (IYR). Notice that XSD is up over 5% and showing some serious relative strength. On a sour note, the Retail SPDR (XRT) is down around 6.5% and the second worst performer. Relative weakness in retail is not a good sign for the consumer discretionary. The performance differential between semis and retail, two cyclical groups, also highlights the current bifurcation in the stock market and could foreshadow choppy trading for the broad indices. 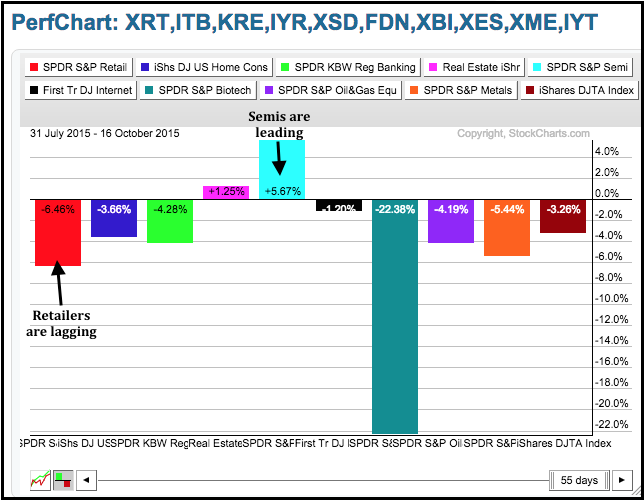