Over the past six months, the Dow Jones U.S. Pipelines Index ($DJUSPL) has gained 25.03% and has been among the best performing industry groups.  But it hasn't been favorable for all pipeline stocks as Williams Companies (WMB) can attest.  While its peers have risen 25%, WMB is down 14% as an atrocious January held back an otherwise strong rebound that began in the second week of February.  The strength over the past five months has been evident as its daily MACD has been in positive territory for the past three months or so.  WMB is down more than 10% over the past two weeks, bringing its uptrend into question.  The current price now resides close to a key pivot level near 20, as reflected below: 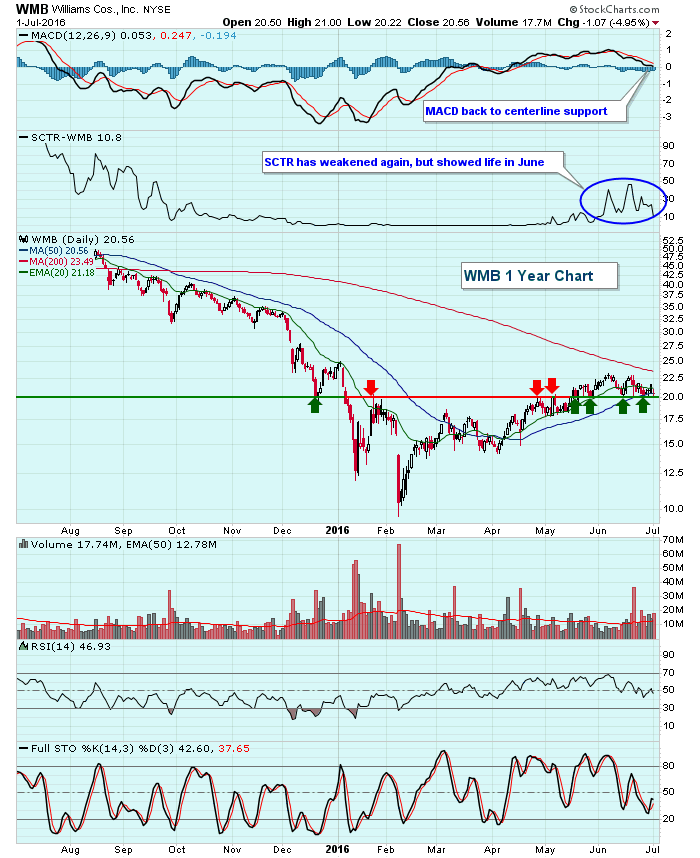 The red arrows (price resistance) and green arrows (price support) help to identify this key level of price action.  WMB's SCTR showed life in June as it began to outperform many of its peers - until the recent profit taking.  With an RSI and stochastic both in the 40s and near a key price level, the reward to risk for entry into WMB appears tempting.  I would just make sure I keep my stop in place.  20 would represent a conservative stop, while perhaps 19 or so would give a bit more room to the downside in the event energy stocks consolidate for a period of time.