Celgene (CELG) showed bullish price action throughout 2016 and recently formed a bullish pennant that could set up an even more bullish 2017. Let's work from left to right on this chart starting with the big base that looks like a double bottom. CELG broke the "thick" trend line extending down from the July 2015 high and exceeded its April 2015 high to confirm the double bottom. One would normally expect a double bottom breakout to hold, but the stock pulled back below 100 with a rather deep decline. Nevertheless, CELG managed to hold above the February-June lows and broke out with a massive surge in early November. The stock was clearly overbought after this surge and worked off these conditions with a pennant consolidation the last three weeks. A pennant breakout would signal a continuation of the prior surge and open the door to a test of the 2015 highs. Note: there is a short video at the bottom of this commentary. 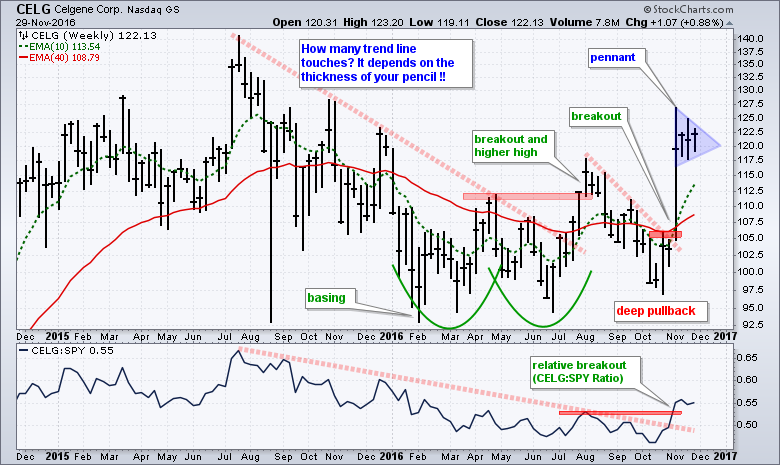 The indicator window in the chart above shows the price relative (CELG:SPY ratio) falling from July 2015 until October 2016 as the stock underperformed for 15 months. Notice that the price relative turned up in mid October and broke above its summer high. This means Celgene is starting to outperform the broader market and relative strength further enhances this bullish assessment. 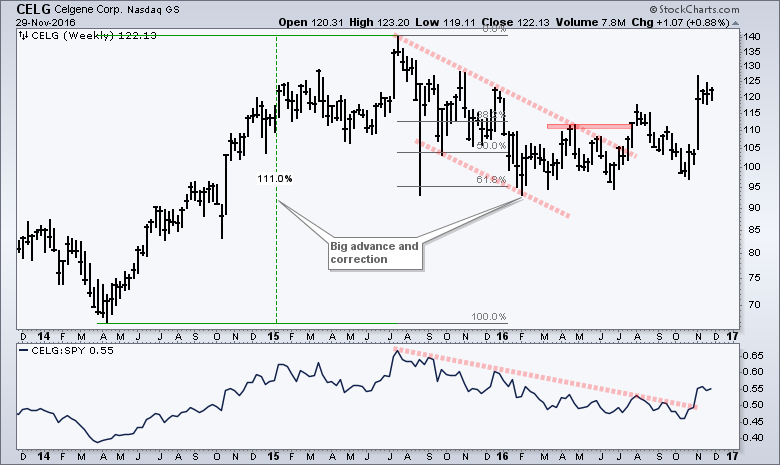 This price chart gets even more interesting if we back it out to three years. Notice that Celgene surged 111% from April 2014 to July 2015. The stock then embarked on a correction that retraced around 61.8% of this advance. From this standpoint, it looks like a normal two-steps forward and one-step backward sequence. The correction has now ended with the breakouts in 2016 and this signals a continuation of the prior advance. While I am not targeting another 111% move from the 2016 lows, the path of least resistance is up and I would expect new highs in 2017. I would re-evaluation this bullish stance on a close below 110. Keep in mind that this is a biotech stock and biotechs are risky!