It has been a rough year for small-caps because the Russell 2000 iShares is up just 1.34% year-to-date and severely trailing the S&P 500 SPDR, which is up around 5.5%. Chartists looking for clues of a small-cap revival may want to watch E-Trade Financial (ETFC) and the other discount brokers (SCHW and AMTD). I will focus on ETFC today because it is currently correcting within an uptrend. An end to this correction could signal a return to animal spirits and a small-cap revival. First and foremost, the long-term trend is up because the stock hit a 52-week high in January and the 50-day EMA is above the 200-day EMA. 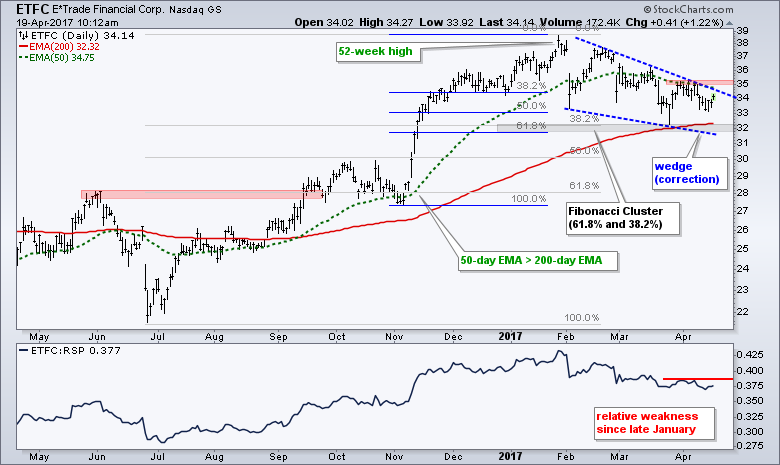 Assuming a long-term uptrend, this means the decline over the last three months is a correction within that uptrend and we should be on guard for signs of a reversal. First, there the Fibonacci cluster in the 32 area marks a potential reversal zone to watch. The first Fibonacci level is a 38% retracement of the November-January advance and the second is a 61.8% retracement of the June-January advance. Together, these two levels mark a possible reversal zone. As far as an actually reversal, I am watching the falling wedge and resistance around 35. A breakout here would suggest that the correction is ending and the bigger uptrend is resuming.