Dentsply International (XRAY) has a large cup-with-handle pattern forming over the last twelve months and the stock is on the verge of breaking rim resistance. Popularized by William O'Neil of Investors Business Daily, the cup-with-handle is a bullish continuation pattern. This means it forms as a consolidation after an extended advance, which runs from October 2014 to a 52-week high in June 2016. The handle is a smaller consolidation after the January-February surge. Either way you slice it, a breakout would be bullish and argue for a continuation of the uptrend. Traditional measuring techniques would target a move from rim resistance that is around the same as the height of the cup, which is 20%. Take this target with a bucket of salt because it is just a guesstimate. 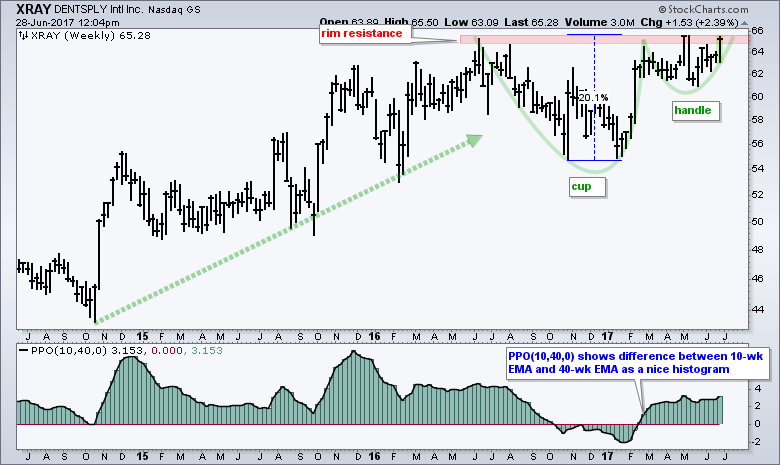 The indicator window shows a nifty way to plot the Percentage Price Oscillator (Thanks, TB!). The PPO(10,40,0) sets the signal line at zero and plots the PPO as a histogram, which makes it easy to see positive and negative readings. It is positive when the 10-week EMA is above the 40-week EMA and negative otherwise. Notice that the PPO(10,40,1) has been positive since mid February and this confirms the immediate trend (up).