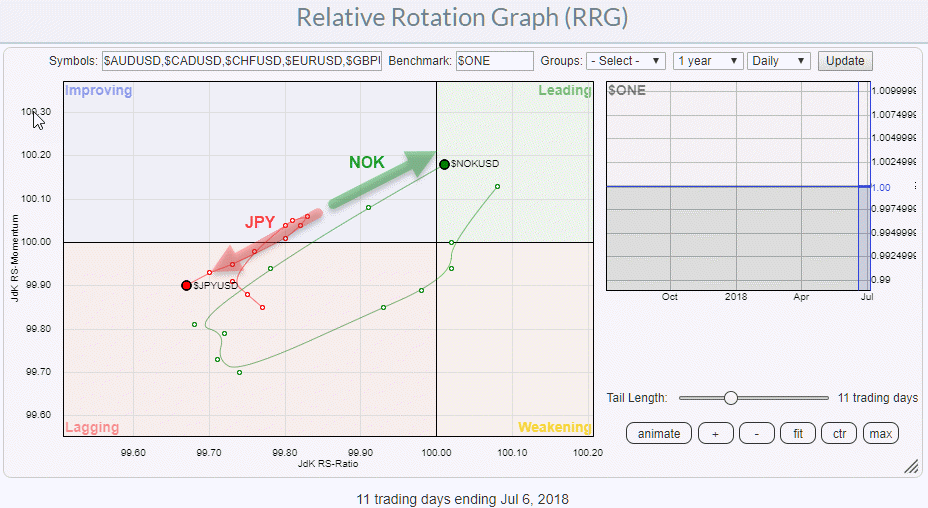 Relative Rotation Graphs are not only used to look at sector-rotation or help with asset allocation decisions but can also help you to pinpoint potential forex trades.

Most currency traders are short-term orientated so the RRG above is a daily chart showing the rotation of the Norwegian Krone and the Japanese Yen vs the US dollar.

You can easily re-create this chart by selecting the pre-defined group "G10-FX USD base" from the drop-down box on the RRG page and set the interval to daily. The chart will show all G10 currencies related to the USD. Ie, 9 currencies on the RRG and USD as the benchmark in the center.

In the RRG above I have only selected $NOKUSD and $JPYUSD to display to get a clearer picture of the rotations I want to focus on.

As you can see these two tails rotate in opposite directions, almost directly opposite.

This rotation indicates strength for NOK and weakness for JPY.

The $NOKJPY is not a very commonly traded pair which means that not too many people are looking at it. As a matter of fact, $NOKJPY is not available on the system as a symbol as such. But... we can create that relationship by entering $NOKUSD:$JPYUSD on a SharpChart.

This will give you the picture below.

The (false) break that occurred late May serves as a good example of a break that reverses back into a range subsequently pushes back to the opposite side of that range, in this case, a test of the upper boundary around 0.139. It is also a good example of why using stops in currency trading makes sense.

After the recent test of the lower boundary NOKJPY is now traveling back towards the 0.139 area.