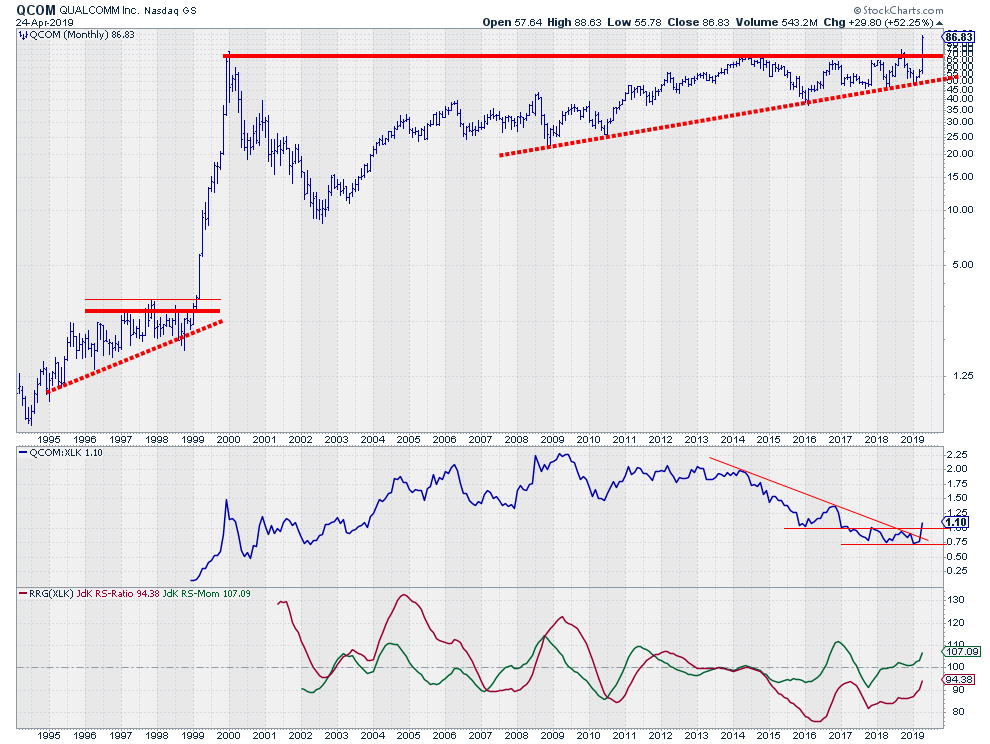 Technology is doing very well on the Relative Rotation Graph for US sectors, with a rotation that is well inside the leading quadrant and pushing further into it. If we shift gears and look specifically at the RRG for the technology sector (against XLK), we can see there is one tail that firmly stands out: QCOM.

At present, QCOM has a long tail inside the improving quadrant, traveling at an RRG-Heading between 0-90 degrees, and is close to a crossover into leading. With all that going for it, this chart definitely seems to be worth a look (IMHO).

When you pull up a chart of QCOM, say, using daily data over the past year, and see the big jumps with massive gaps, your first response might be like mine: "...hmmm, that's a nice move but I'm a little late now; I'm not gonna chase this one."

This is the point where common sense comes in and you may feel compelled to take a closer look at what's happening, because moves like this indicate a major shift in supply and demand. Where did all this demand come from so suddenly?

Sometimes Fundamentals DO Make A Change

In the case of QCOM, the clear reason behind the shift is the settlement on the royalty dispute with AAPL. I am by no means a fundamental analyst, but from what I understood this was something that was overshadowing QCOM's performance for quite some time already. The fact that this issue is now gone makes a big difference and the market is acknowledging that.

This is reason enough to start digging and looking beyond the last 12 months of price performance, so let's pull up some longer-term charts. The monthly chart printed above this article caught my eye in particular.

At first sight, the recent jump in price from $58 to $86 looks like a very steep move, one where we're probably too late to jump on board. But...

What we see here is a very convincing break to the highest level in 20 years. The month is not over yet, but a drop back below that breakout area between $70-75 seems very unlikely (though you should keep that in the back of your mind nevertheless).

This former barrier of steel that acted as resistance for 20 years will now very likely come back as support in the event of a decline, which, with virtually no overhead resistance and the downside well-protected, makes QCOM very attractive from a technical point of view. The last time QCOM rose to new all-time-highs was at the start of 1999... Just saying ;)

The relative strength of QCOM vs. XLK reached its high in 2009 and, after some sideways movement, really started to decline from 2014 onwards. That decline recently ended when the RS-Line completed a double bottom, breaking its previous high for the first time since 2009, while simultaneously taking out the falling resistance line. And this relative strength line is nowhere near the all-time highs yet!

From a relative perspective, the party has only just begun.

From a trading perspective, you may want to wait for a throwback towards the new support area to optimize the entry or, alternately, split positions in half or thirds, buying only 1 part at the market and then buying the remaining part(s) at lower levels, if possible.