In our previous weekly note, we had mentioned the possibility of the markets not giving any runaway moves on the higher side. The week that went by remained on expected lines as the headline index resisted to one of its significant double top resistance areas, which lies in the 11840-11880 zones. In line with this analysis, the markets formed the weekly high around this point and then went into some corrective move. The NIFTY did not make any vital headway on either side and ended with a modest loss of 99.20 points (-0.84%) on a weekly basis. 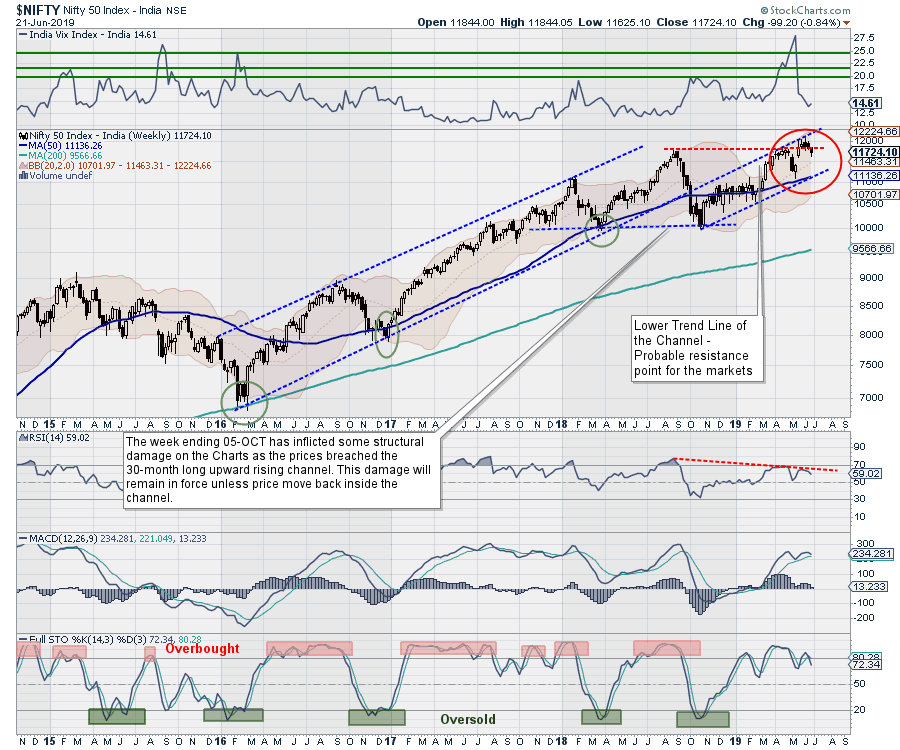 As we step into another week, we expect the markets to remain generally volatile. The India VIX, which rose 5.15% this week, remains over 50% off from its recent high. Along with these low levels of VIX, the NIFTY continues to remain at relatively elevated levels and does not lay a good foundation for any significant and sustainable up move going ahead. Although a range-bound consolidation cannot be ruled out, the markets remain more vulnerable on the downside.

The weekly RSI stands at 59.02; it remains neutral while not showing any divergence against the price. If visually inspected for a more extended period, we can see the RSI appears to have been marking lower tops and resisting a trend line. The weekly MACD remains bullish and trades above its signal line; it is narrowing its trajectory sharply. No significant formations are observed on the candles.

The pattern analysis on the charts shows that the NIFTY has formed a lower top and lower bottom on the weekly bar charts. The index resisted initially to the lower trend line of the 3-year long upward rising channel that it breached before at the end of 2018. After forming lower tops and bottoms, the headline index has met and resisted at the significant double top resistance that exists in the 11840-11880 area.

The coming week will be crucial as the markets face technical headwinds at higher levels. The broader technical set-up remains challenging; unless the NIFTY ends above the 11900 levels, there are increasingly fewer possibilities of any sustainable up move occurring.

We expect volatility to increase in the coming week and recommend avoiding aggressive positions on either side, keeping protective profits with directional moves that the market takes. While remaining highly selective with stock picking, vigilant protection of profits on either side is advised.

The review of Relative Rotation Graphs (RRG) shows that we can expect relative outperformance from the Services, PSE and Financial Services groups, as they remain firmly placed in the leading quadrant. Joining these groups are the IT and the Infrastructure packs, which have quietly crawled into the leading quadrant while steadily improving upon their relative momentum as compared to the broader markets.

Apart from this, Realty, Media, Metals, BankNIFTY, PSU Banks, Pharma and Energy groups are seen losing their relative momentum; no stand-out performance is expected. While some stock-specific moves are expected from these groups, no major out-performance is seen coming from them. The Auto Index, which had moved into the improving quadrant, is now taking a sharp turn. This index may remain under pressure in the coming week.