In yet another wide-ranging week, the NIFTY oscillated in a 400-point range, ending the week with a modest cut. In our previous weekly note, we had raised concerns about the NIFTY failing to confirm the attempted breakout. In line with the our analysis, the index did not show any intention to break above the critical resistance levels. After moving in a broad range, the NIFTY ended with a minor loss of 47.35 points (-0.40%) on a weekly note. 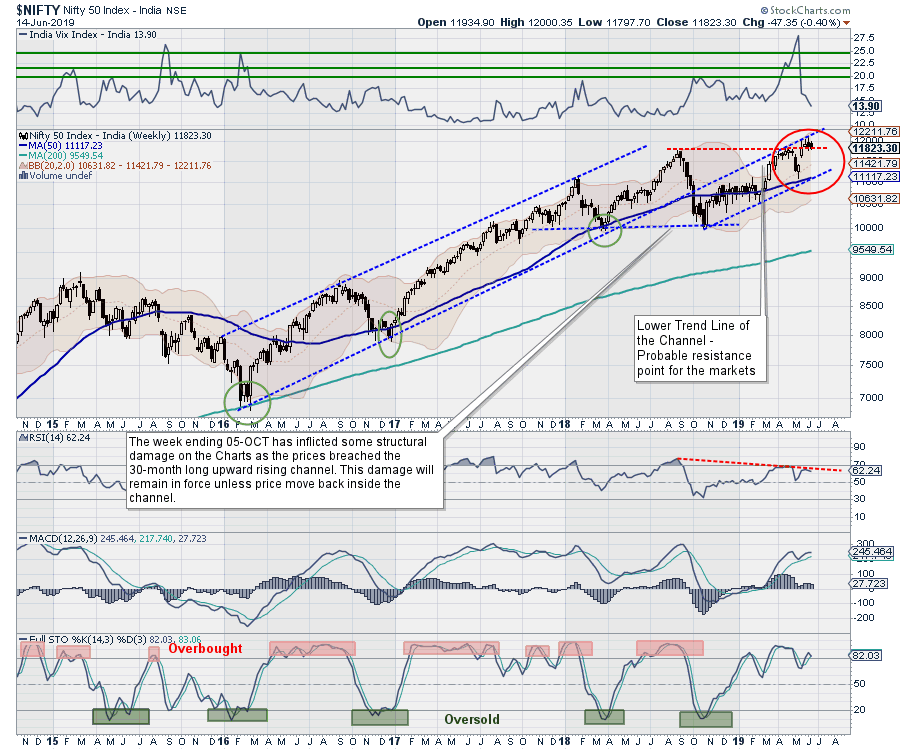 The broader technical set-up does not paint a pretty picture for the markets going forward. Although the NIFTY is resisting the critical 12000-12040 zone, it remains in the upper band of a broad trading range. In addition, the VIX has lost another 6.48% and trades at a multi-month low level of 13.90. From the peak, the VIX has corrected 51% while NIFTY remains at elevated levels. The fractured marked breadth will prevent any sharp surge in the index.

The weekly RSI is 62.24; it remains neutral over the 14-period. However, when RSI is inspected visually beyond the 14-period, it continues to show bearish divergence against the price. The weekly MACD remains bullish and trades above its signal line. No significant formations, apart from the emergence of a black body, were observed on candles.

The pattern analysis of the weekly charts shows that the NIFTY has continued to resist to the lower trend line of the upward rising channel that it breached in the last quarter of 2019. A secondary channel has therefore formed. The NIFTY is showing all signs of fatigue and is not marking a higher high.

There are higher chances of volatility spiking in the coming week. These possibilities have increased as the VIX has shed over 50% from its peak, while NIFTY continues to remain at elevated levels. The complacency in the markets is quite visible, which could potentially push the markets into some corrective moves. In the best-case scenario, the NIFTY may see some technical pullbacks, but it is not expected to give any sustainable surge from current levels. We recommend using all up moves to lighten the positions and protect profits. The markets should be approached with caution, as they remain highly stock-specific and trade with a negative bias.

Our review of Relative Rotation Graphs (RRG) shows that, in the coming week, the only relatively outperforming sectors will be Financial Services, which remain firmly in the leading quadrant along with the CNX PSE index, as well as from the IT and Infra packs, which are sharply improving their relative momentum against the broader markets.

Along with these groups, we can expect some stock-specific performance from the FMCG and Consumption groups. These groups remain in the lagging quadrant but are attempting to consolidate. The Media, Energy, BankNIFTY, Energy, PSU Banks and Realty indexes are not expected to put up a good show; they are all losing momentum steadily, despite being placed in different quadrants on the RRG.

The Pharma Index has been performing poorly over the past couple of weeks. This group is likely to remain weak. Some stock-specific performance from the Auto pack can be expected.