The year that ended today, with NIFTY closing at 11583.90, remained quite eventful for the Indian equity markets.

We traditionally wish a "Happy and Prosperous New Year," and the current year remains prosperous in a literal sense. On the last trading day of the current Samvat on 6th November 2018, the NIFTY had ended at 10530. From those levels until today, the NIFTY has gained 1053.90 points, or 10%, which is a decent gain from any angle.

The year remained thoroughly volatile as the markets faced many events, the major one being the general elections in mid-2019. The markets, over and above this, digested virtually two union budgets as the interim budget; the vote-on-account was quite literally as elaborate as the actual budget. The equity markets also dealt with global uncertainties, trade war tensions and a crude shock that came in following attacks on Saudi Arabia oil attacks. On the positive side, it tasted a couple of doses of reforms, the important one being rationalization of corporate taxes. The NIFTY also marked its fresh lifetime high this year as well. 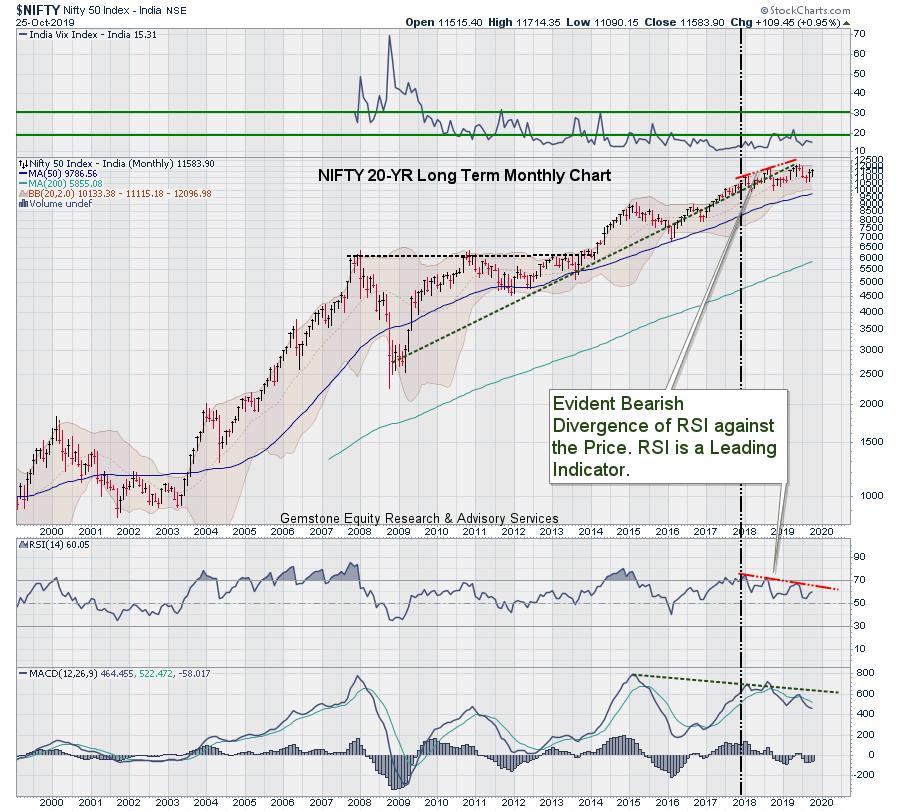 The previous two years had a couple of technically important events that will have significance in the coming year.

Following the high point of 11171 formed in February 2018, the NIFTY formed its incremental high 11751 in September 2018. After that, another incremental high was formed at 12103 in June 2019. If we analyze the long-term technical charts of NIFTY, it is clearly evident that the incremental highs of 11751 and 12103 were formed with a bearish divergence on the RSI. The Relative Strength Index (RSI) is a leading indicator. While the NIFTY kept marking higher highs, the RSI not only did not confirm this trend but went on to mark lower tops all through the year 2019. The monthly MACD, which usually lags the market, is bearish, trading below its signal line from the last couple of months.

Speaking from the technical point of view, it would be incorrect to say that the primary multi-year uptrend ended after the NIFTY marked the high at 12103. However, we can undoubtedly say that the primary trend has halted and is presently taking a breather. Given the broader technical setup, we will see NIFTY requiring significant momentum and sustained strength to move past its previous highs in a meaningful way.

Gains over the coming months cannot be ruled out, but all such gains may remain capped and limited while facing stiff overhead resistance at higher levels. Continued bearish divergence on the leading indicators means that internal strength in NIFTY, when compared against its own self, is lacking; this is what the market will have to work on if it is to make higher highs going ahead. The coming year, from a technical point of view, is all likely to remain a year with capped gains.

Speaking of sectors, the coming year is likely to see a lot of sector rotation as well. We expect pockets like consumer staples, consumption, FMCG, utilities and PSU companies to do well, remain resilient, and relatively outperform the broader markets.