In a wide-ranging trading week, the Indian equity markets halted their four-month winning streak. The NIFTY met its important pattern resistance, from which it reacted. Over the past five trading sessions, the NIFTY saw a trading range of close to 500 points. Amid volatile moves, it was a time for underperformance in the banks, but the midcaps continued to relatively outperform the frontline NIFTY 50 as they gained 1.45% on a weekly note despite the selloff. The headline index NIFTY, however, closed the week on the negative, losing 313.75 points (-2.69%) on a weekly note. 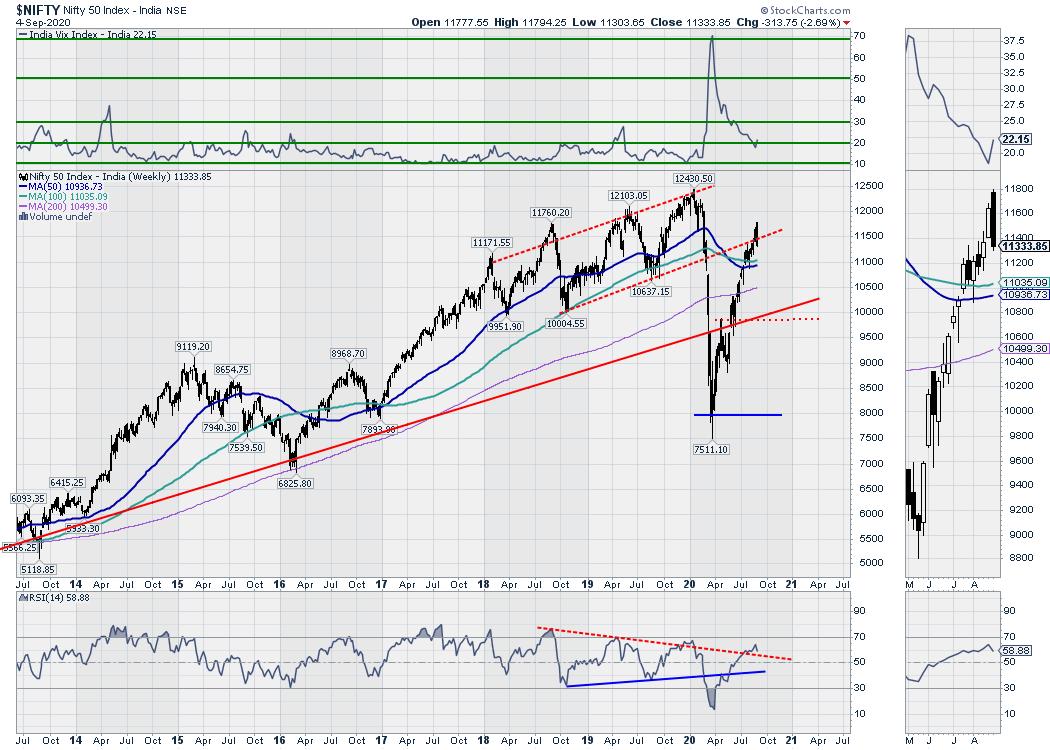 Many technically important things happened this week. The NIFTY resisted precisely at the lower trend line of the channel that it broke on its way down. This has added to the credibility of the resistance area. The index continues to trade above its key moving averages, with 50-week MA and 100-week MA at 10936 and 11035, respectively. This makes this 100-point zone of 10935-11035 crucial supports for the NIFTY in the near term. With the risk-on liquidity-driven setup staying very much in place, this zone is unlikely to be taken out soon. The volatility, represented by INDIAVIX, spiked 20.74% to 22.15, which was at one of its lowest levels until this week.

The coming week may not see any runaway up moves, but we expect the markets to limit downsides and attempt to gain some stability. The levels of 11435 and 11550 will remain resistance points. The supports will come in at the 11250 and 11035 levels. The trading range is expected to remain just as wide as the previous week. Volatility, too, is expected to increase.

The weekly RSI is at 58.88; it remains neutral and does not show any divergence over the 14-week period. The weekly MACD is bullish and still above its signal line. A bearish engulfing candle has emerged. Its occurrence near the key pattern resistance adds to the credibility of the resistance point. It has potentially marked an immediate lower top for the markets for the near term.

Equities, as an asset class, will continue to relatively outperform the other assets over the coming few weeks. Given the unabated up moves that we saw, the previous week may have pushed the markets in a broad consolidation phase. However, we do not expect any drastic downsides from the current levels. Also, on the upper side, NIFTY will struggle to reach to a point from where it reacted.

All this translates into one thing – markets have grown too stock- and sector-specific. Leaving aside banks, which may continue reacting to the external news flow, we highly recommend staying put with the defensive stocks and sectors, as well as avoiding any major and aggressive positions on either side. A cautiously optimistic view is advised for the coming week. 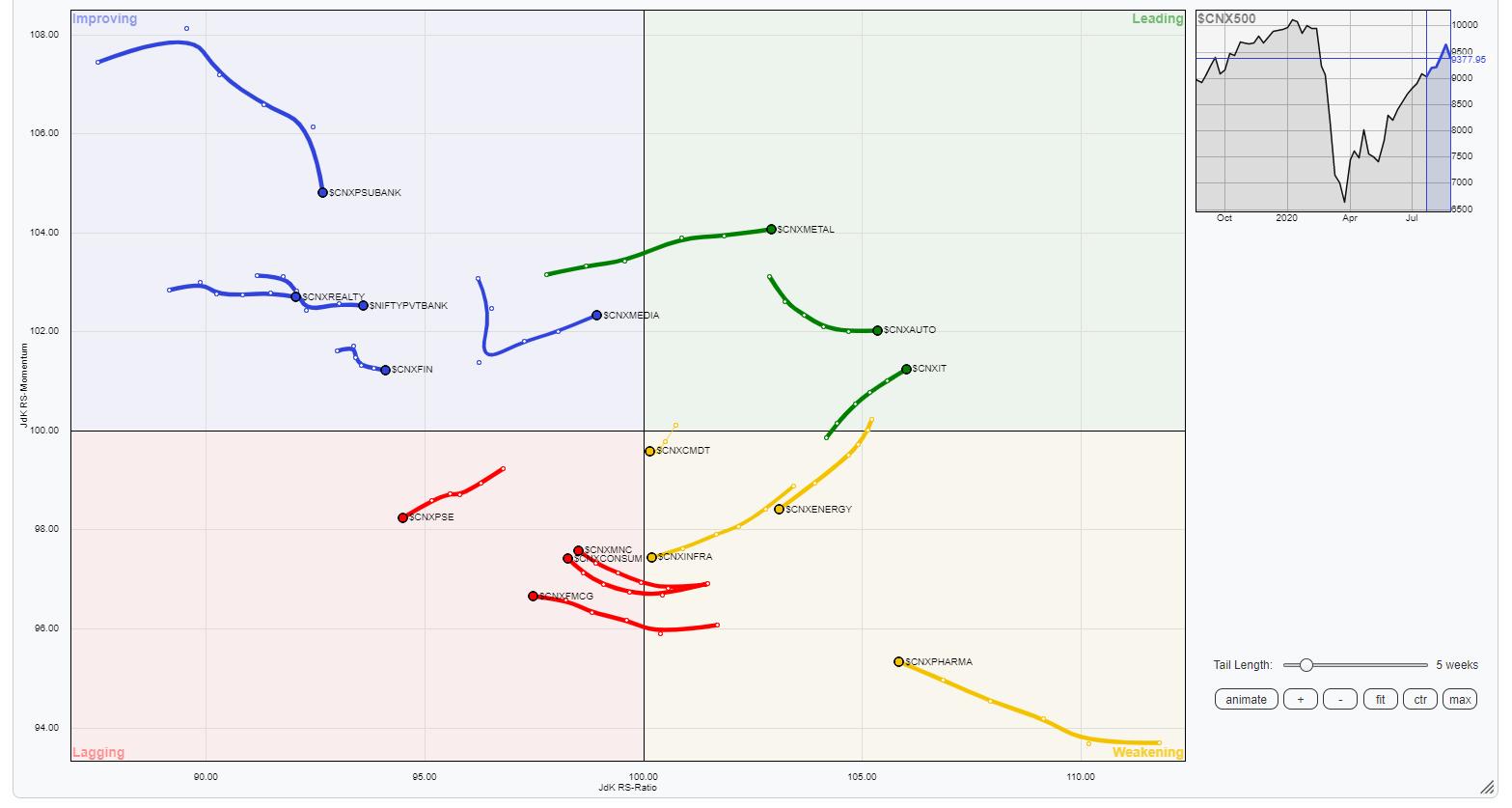 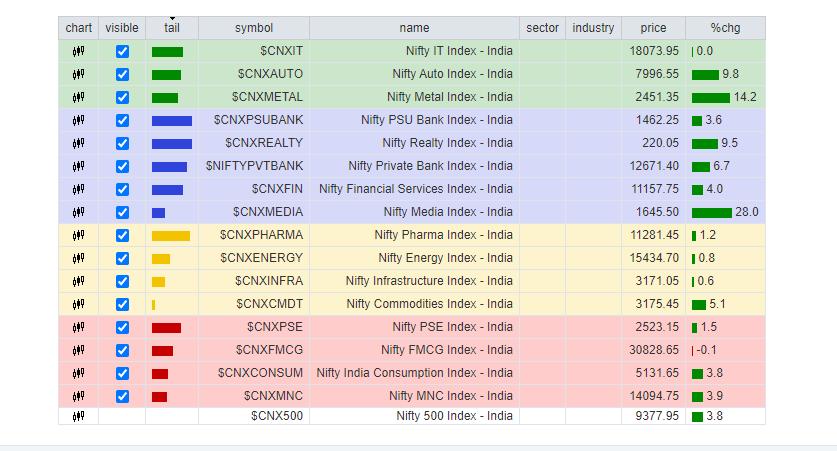 The review of Relative Rotation Graphs (RRG) points towards a minor hit that the momentum of PSU Banks has taken in the previous week.

The NIFTY PSE and NIFTY Infrastructure groups are advancing in the lagging and the weakening quadrant, respectively, and may continue underperforming the broader markets relatively. The NIFTY Pharma is placed in the weakening quadrant while NIFTY Consumption and FMCG are in the lagging quadrant. These groups are seen attempting to consolidate themselves and improve on their relative momentum. Some stock-specific performance may note be ruled out from them.