However, there are times, when this bullish reversal pattern — Inverted Head & Shoulders — often acts as a "Continuation Pattern"; during the such instance, such a pattern developed following an existing uptrend and results in the continuation of the uptrend. The most recent example of this happening is seen on Colgate Palmolive (India) Ltd — COLPAL chart. 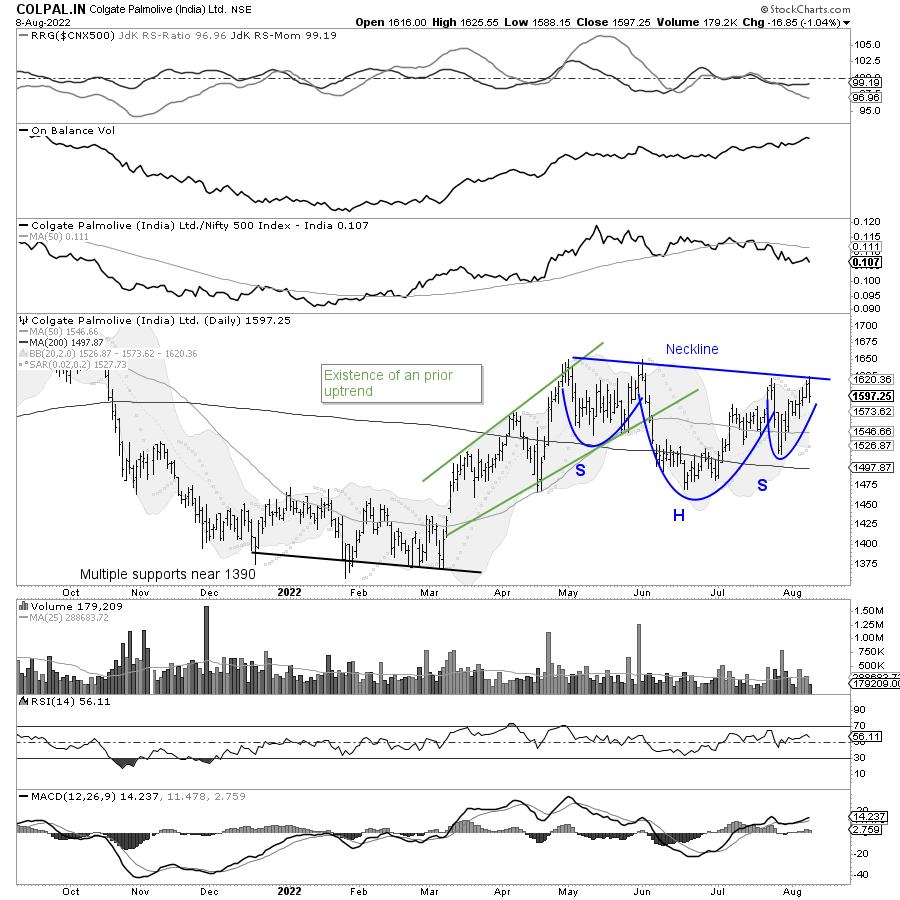 This is not a classically flat inverse Head-and-Shoulder pattern, but a complex and sloping one. However, it is very much a valid one, as it has developed over two months. The neckline is placed at 1600 and the stock has tried to stage a breakout from this pattern.

The RSI has marked a new 14-period high; however, it is neutral and does not show any divergence against the price. The MACD is bullish and above the signal line. Importantly, the Histogram is seen widening; this implies acceleration in the momentum on the upside.

If the present pattern resolves on the expected lines, the stock may test 1750-1785 levels. Major support at Close levels exists in form of 200-DMA, currently placed at 1511. Any close below 1500 will negate this view.

Disclosure pursuant to Clause 19 of SEBI (Research Analysts) Regulations 2014: Analyst, Family Members, or his Associates holds no financial interest below 1% or higher than 1% and has not received any compensation from the Companies discussed.

The recipient should independently evaluate the investment risks. The value and return on investment may vary because of changes in interest rates, foreign exchange rates, or any other reason. Past performance is not necessarily a guide to future performance. The usage of the Research Reports and other Services are governed as per the Terms of Service on https://equityresearch.asia/terms-of-use

The Research Analyst has not received any remuneration from the Merchant Banking activities.

Compensation of the Research Analysts is not based on any specific merchant banking, investment banking, or brokerage service transactions.

The Research Analyst is not engaged in a market-making activity for the companies mentioned in the report.

The Research Analyst submits that no material disciplinary action has been taken on him by any Regulatory Authority impacting Equity Research Analysis activities.

This report is not directed or intended for distribution to, or use by, any person or entity who is a citizen or resident of or located in any locality, state, country, or other jurisdiction, where such distribution, publication, availability, or use would be contrary to law, regulation or which would subject the Research Analyst to any registration or licensing requirement within such jurisdiction.