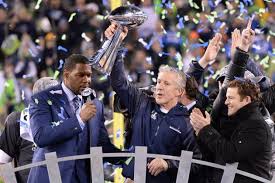 “We envisioned this from day one.  We prepared for this.
We expected this.  We deserve this.”
—Pete Carroll, Coach of the Seattle Seahawks
2014 Super Bowl Champions

Pete Carroll’s statement may sound cocky, but it’s preceded by a great deal of preparation and hard work.  The cocky mentality is just the end product.  For me, the Seahawks methodology has many parallels to investing and should be embraced by investors.

It just so happens that my house is directly across the lake from the Seahawk’s headquarters and practice facility.  It’s a sensational complex on the shores of Lake Washington where I can often hear the troops practicing.  Their gigantic weight lifting room has large windows looking out onto the lake, the executive offices overlook the outdoor fields, and the indoor football arena has windows encircling the upper portion of the structure.  The point being, I can tell you their schedule and how they burn the midnight oil.  More often than not, when I get up in the morning at 5:30 AM, I can attest to the fact that the Hawks are up as well.  As John Elway use to say, “The secret of success is that there is no secret.”

I was witness to this early morning ritual on December 23rd at 4:30 AM, the morning after their 17-10 loss to the Arizona Cardinals – their first home loss in years – when the lights were on and they were hard at it re-examining, revising and refining their “program”.  Newspapers the next day said it was Coach Pete Carroll and his star quarterback, Russell Wilson, who were there in those early hours reviewing film and making adjustments.  I know it to be fact.  That is the beauty of what they proudly call their “program”.  Much like a winning investor who embraces change and adjusts his or her methodology to reflect lessons learned.  The Seahawks program is always evolving as well.

In that way, the NFL is much like the NYSE.  It’s never static and always changing.  It’s been 4 years now that I’ve been watching Coach Carroll burn the “midnight oil”.  This team is no overnight success.  I truly believe that this is a guy who could be an extraordinary stock market trader.  He chose to be an extraordinary football coach instead.

Not taking anything away from the coach, but it’s much like Russell Wilson who many so-called experts claimed was too short to be a top tier quarterback.  Pete Carroll didn’t need to graduate from Stanford with a PhD to become an exceptional coach.  Brains matter, but high IQs don’t guarantee diddly-squat in football or investing.  It’s all about dedication, discipline and emotional control.  Most investors could be consistently profitable traders, but they are simply not willing to pay the price to excel.  Make no mistake – there is always a price and most investors choose to look for short cuts instead.

In my book, Pete Carroll is a motivational genius who knows just the right buttons to push on each player to keep him focused and hungry.  Even the players joke about being a collection of overlooked misfits, but that is exactly what drives them so hard.  Gosh,  Coach even motivates me by simply turning on the lights at 4:30 AM!  As a trader, I look for motivation wherever I can find it because I have to be both coach and player, and I’m fine with that.  As I often tease, a trader has to be a bit schizophrenic anyways.

This year’s Super Bowl pitted the best NFL offense against the best NFL defense.  As a trader, there was never any doubt in my mind which team would win.  I am a master of stops and exits, and my focus on defense first has allowed me to produce consistent winning returns over many years.  In fact, my initial question is always where I am going to get out of a trade if the market tells me I’m wrong.  Heck, it’s not as if I first say “this looks like a certain 10 banger.”  If you protect your principle, you’ll have dry powder for the next opportunity that presents itself.  In other words, think defense first and then ask how you’re going to execute the buy.  Don’t believe me – read the book Market Wizards.

Pete Carroll is said to be a master of maximizing the resources he has available to him.  I believe that begins with the unique type of players he recruits.  Big egos have no place in what he calls “his program”.  As an investor, a big ego will doom you as well.  Going forward, the challenge for the Seahawks will be to avoid the trappings of success and to be wary of dimming intensity.  Much like a trader, you are only as good as your last win.  But regardless, you are not and you shouldn’t be defined by your last trade – whether it’s a loss or a gain.  That is why a good portion of an investor’s focus should be on understanding the “Investor Self”.

Seattle still has an attitude as an up-and-comer, and this same perspective is perfect for investors.  In the Super Bowl, the Seahawks had a brilliant game plan with carefully considered contingencies, and they executed it flawlessly, shutting down Payton Manning like no other team could have done.   This is straight from the traders’ handbook.  Have a plan and execute it.  The team’s next big challenge is how to replicate this season next year with a target on its back while keeping egos in check and minimizing personal baggage as the fan fervor wanes.  We traders also have to stay energized and humble or the markets will cause us to fumble.  We can’t begin coasting even after some Super Bowl caliber trade.

Sport is cyclic just like the markets.  Players, coaches and fans will need to pause and refresh.  After all, both football and investing have to be fun.  Pete Carroll makes it fun under the mantra of “always compete”.  We investors must embrace the same mantra.

The reality is that the Denver Broncos aren’t dwelling on what just happened.  They are already looking ahead and focusing on the future.  On the other hand, the Seahawks now know firsthand the effort, preparation and commitment it takes to win a Super Bowl.  Spring is not that far off, and I’m sure I’ll soon see the midnight oil being burned again across the lake.   You see, the NFL and the NYSE aren’t really that different.