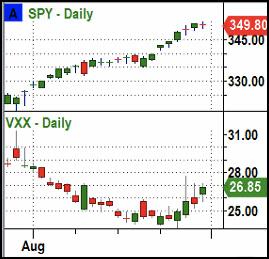 This article was originally written on August 31st, 2020.

Today, the SPY ended its best August performance since 1986 with a market message that is well worth paying attention as soon as tomorrow and well into September. Fortunately for me (and you), a lot of pieces of today's market and Modern Family's message came together from what I've discussed over the last week in this commentary and our Market Outlook blog.

The timing is perfect. I can pull it all together right now, and then Mish will be back to writing this commentary tomorrow with a clean slate and a new month. Here's what happened...

The SPY's 5-day up/down volume turned lower, as illustrated in the chart below. 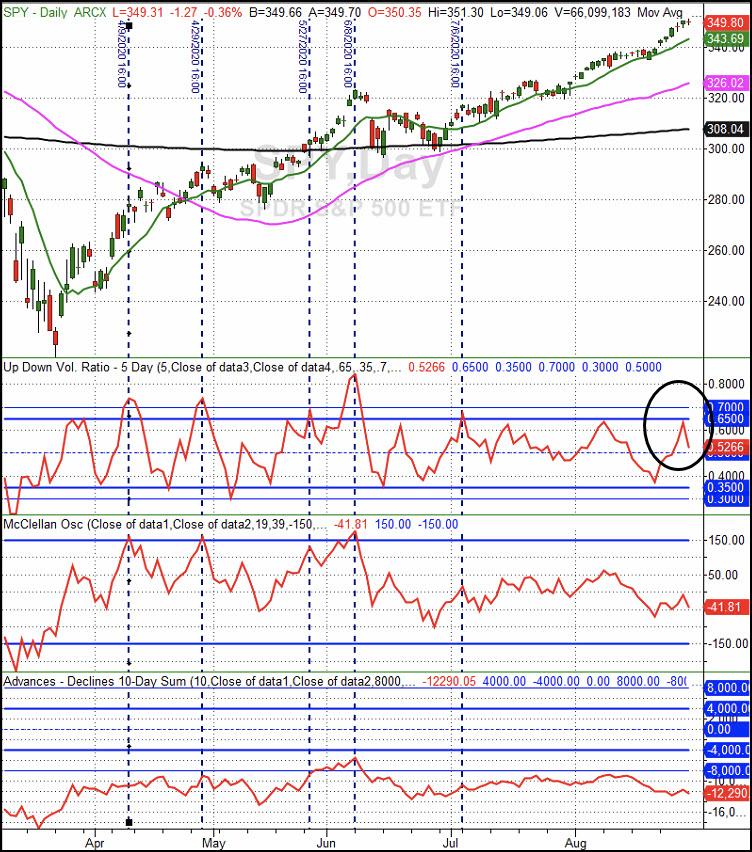 This is not a long-term negative, but it is a reason to at least expect a pause in the SPY, and, as you can see from the other measures in this chart, this is not a very overbought level. An important note: the NASDAQ equivalent does NOT have the same pattern.

In addition, the SPY, IWM and DIA all closed down on a Monday. Oops.

As I explained yesterday, since the March lows, stocks have closed up on Mondays 70%-to-over 80% of the time depending on the index, so when they don't, something may be "different." And worse, they closed under their prior day's low. This pattern is particularly noteworthy when it's a "first in some time" as it is now. As a result, it will be important to look for a 30-minute Opening Range breakdown tomorrow to confirm the beginning of a down move.

If you're looking for a trade in all this, here's one...

The VXX continues to be strong regardless of the SPY's strength. The two can not trend the same way for too long. Therefore, if the SPY falls, the VXX looks ready to explode higher, and if the SPY continues up, the VXX appears to be nervous enough to hold firm. It sounds like a good time to be long the VXX rather than short the SPY.

I'll be looking for a VXX OR breakout, and even if you're not going to trade it, VXX trending higher will likely point to a muted potential for the SPY.

However, all the news is not bearish. The markets rotated...

SMH lagged as feared, XRT broke down as feared, IYT reversed at its key breakout level, but... IBB finally broke out of its consolidation to the upside!

AAPL and TSLA both broke out of their Opening Ranges (OR) to the upside and ran, helping the QQQ still close up over 1%.