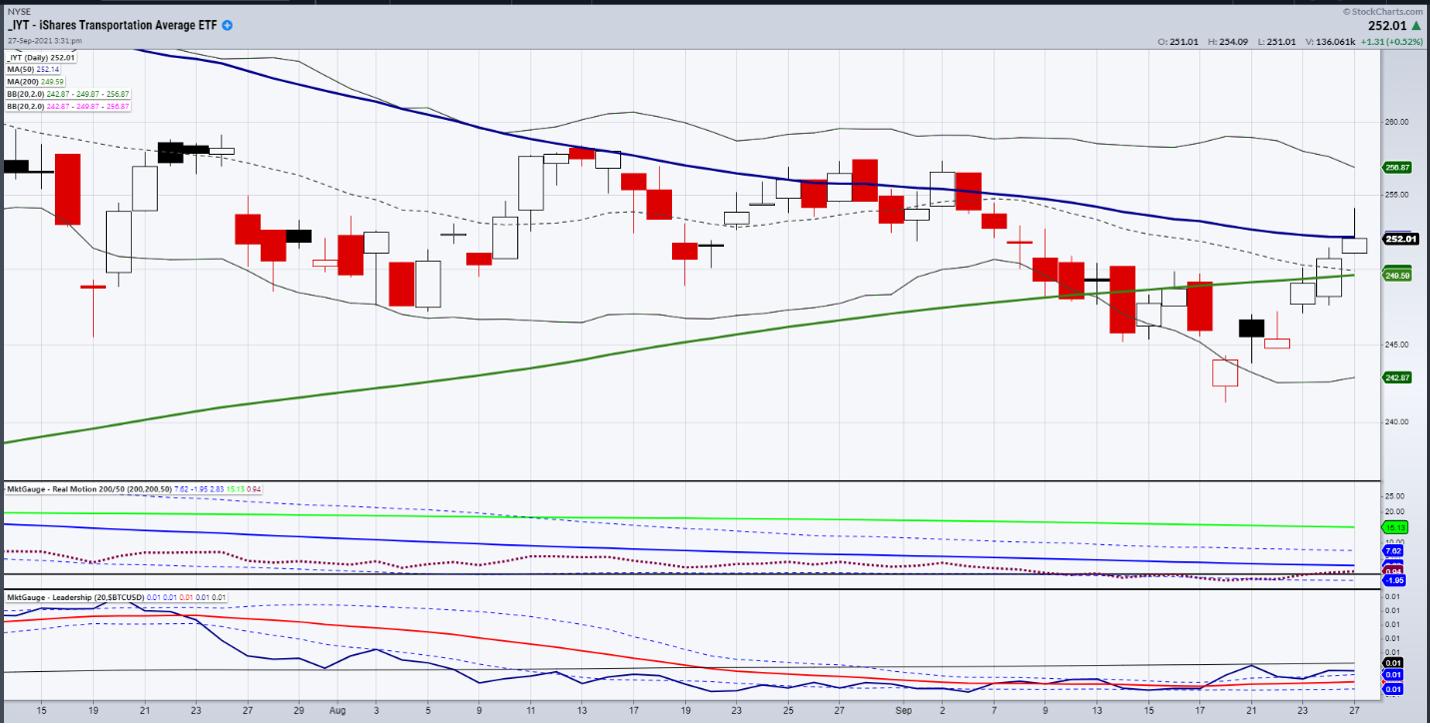 The Retail sector improved to start the week. As measured by XRT, we see an improved phase back to bullish, but still a very much rangebound sector. We saw more rotation into the small caps, although IWM is also looking very much rangebound. Regional Banks (KRE) were quite happy; perhaps the rise in yields has helped that area.

However, the transportation sector continues to intrigue us the most. IYT, at the end of the day, could not clear over the 50-DMA, nor the very important 6-month calendar range. Is this telling of the many fractures we see both economically and politically?

On the table right now is the $3.5 trillion budget reconciliation package, recognized as the centerpiece of President Joe Biden's domestic agenda. This is a ten-year spending plan designed to address education, health care, and childcare support needs. It also includes a package to tackle climate change and infrastructure. However, with 10 moderate Democrats on the fence, there is high potential for a stalemate, with questions on taxes, health, climate change and the ultimate price tag.

Centrist Democrats see the overall price tag as too much, while progressive lawmakers are hesitant to compromise any further after already having dropped even more ambitious ideas. Furthermore, most if not all Republicans will likely vote against it.

Additionally, a $1 trillion infrastructure bill will be sent to the House floor next week. That bill includes funding for roads and bridges, money for transit and rail, a broadband upgrade and an upgrade for airports, ports and waterways. All are considered essential upgrades to the U. S's flailing infrastructure.

And that's not all! The Fiscal year ends on Thursday. The government needs to come to some sort of agreement before then or risk a government shutdown. However, projections still have the Treasury being able to exercise its borrowing authority through October 15 or November 4th depending on how long current allocations last.

Even without Biden's budget package, good news could at least come in the form of an agreement to pay off old debts, requiring the debt ceiling to be raised marginally. The bad news would be that raising the debt ceiling to include the budget proposal has little chance of passing the Senate. So, the government could prevent a shutdown, or worse a default, but without passing the budget proposal, the confidence in the current administration will suffer further.

Bottom line for the market, we see the rates continuing to rise or, at least, we venture to say rates have bottomed. Without a package for infrastructure or engendering growth, we still see a stagflation cycle. We expect an ensuing commodities super cycle, hence raw material shortages, supply chain issues, and a low labor market. A hoarding mentality will prevail.