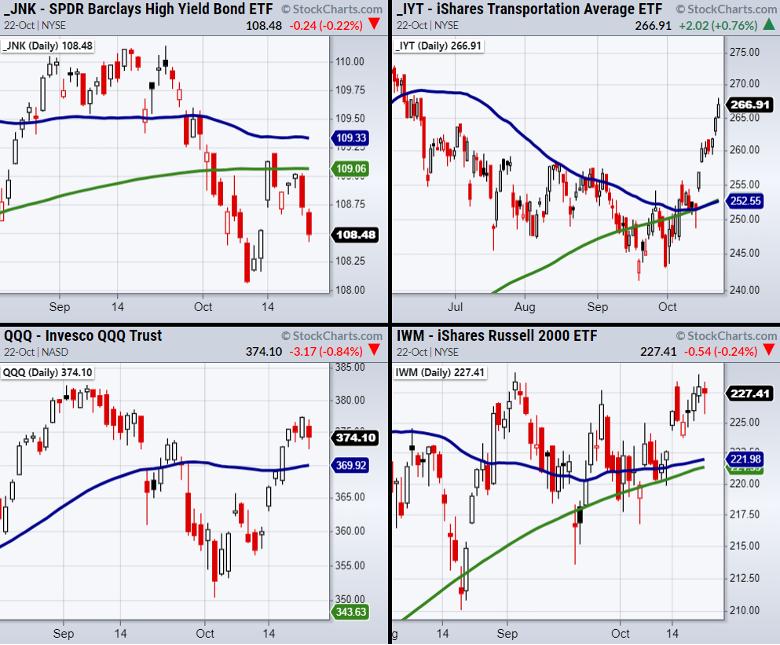 Friday, the chair of the Federal Reserve –Jerome Powell spooked the market when he announced that the Fed would keep rates near zero and continue with its tapering schedule. Though the market cannot blame Powell for stating already well-known information, it was enough to help create an intra-day selloff.

While the market steadied itself in the latter half of the day, the selloff reveals how nervous the market is at its current price level.

So far, both the S&P 500 (SPY) and the Dow Jones (DIA) cleared all-time highs on Friday but only the DIA was able to hold them.

On the other hand, the tech-heavy Nasdaq 100 (QQQ) and the small-cap Russell 2000 (IWM) traded within their weekly range showing consolidative price action.

Commonly watched market strength indicators such as High Yield Corporate Debt (JNK) and the Transportation sector ETF (IYT) are also giving mixed points of view with JNK breaking underneath its 10-DMA at $108.69 while IYT continues its rally.

Watching the demand side of the economy through IYT's strength is a bullish sign while investors' selling high yield debt indicates a risk-off scenario. However, JNK does have more support to watch at $108.06.

Furthermore, traders will need to stay frosty as the market continues to sit in a pivotal area and monitor both JNK and IYT along with the major indices for any potential shift in sentiment come Monday.

Get ready to make some money! On this week's edition of StockCharts TV's Mish's Market Minute, as earning season begins, Mish shows you stocks that have already reported and a whole bunch that are set to report next week.