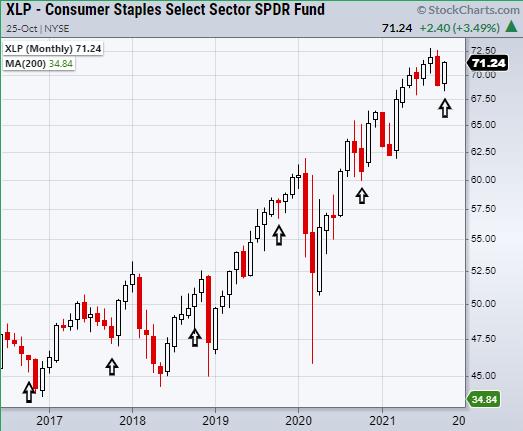 The Consumer Staples ETF (XLP) is known to be an area of focus through market downturns, as it offers exposure to companies that are historically safety plays. Some of XLP's biggest holdings include companies such as Walmart, Pepsi, Colgate and more. However, major indices are sitting at or near new highs, with XLP lagging not far behind. While this is not signaling a direct market downturn, it is showing that investors are keeping XLP on watch in case the market begins to look weak. Furthermore, XLP is likely rising due to worries of inflation and the well-known shipping problems the U.S continues to face.

With that said, seasonally, XLP performs poorly in October, but, as seen in the above monthly chart, XLP has outperformed the past 6 years of trading thus far. This is an interesting trend if XLP continues to push higher along with the general market. 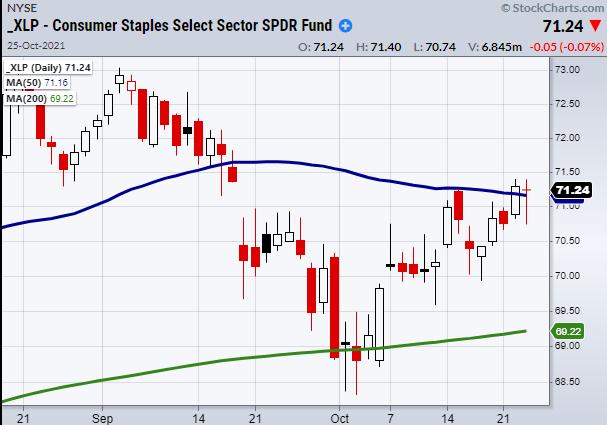 Looking at XLP from a daily perspective, it has just made a second close over its 50-day moving average at $71.16. This confirms a bullish phase change and potential new support area if XLP holds its major moving average. If consumer goods continue to have pressure from increasing demand and waning supplies, we can expect this to have a positive effect on price. On the other hand, if XLP breaks down, this could be showing that prices of general goods and potentially inflation are beginning to ease. However, the amount of time it will take for inflation pressures to ease is not easy to predict, which is why it's best to keep XLP on watch for long-term trend changes.

On the latest edition of StockCharts TV's Mish's Market Minute, Mish shows you the best of the best of the charts that she's currently watching as earning season shifts into high gear.