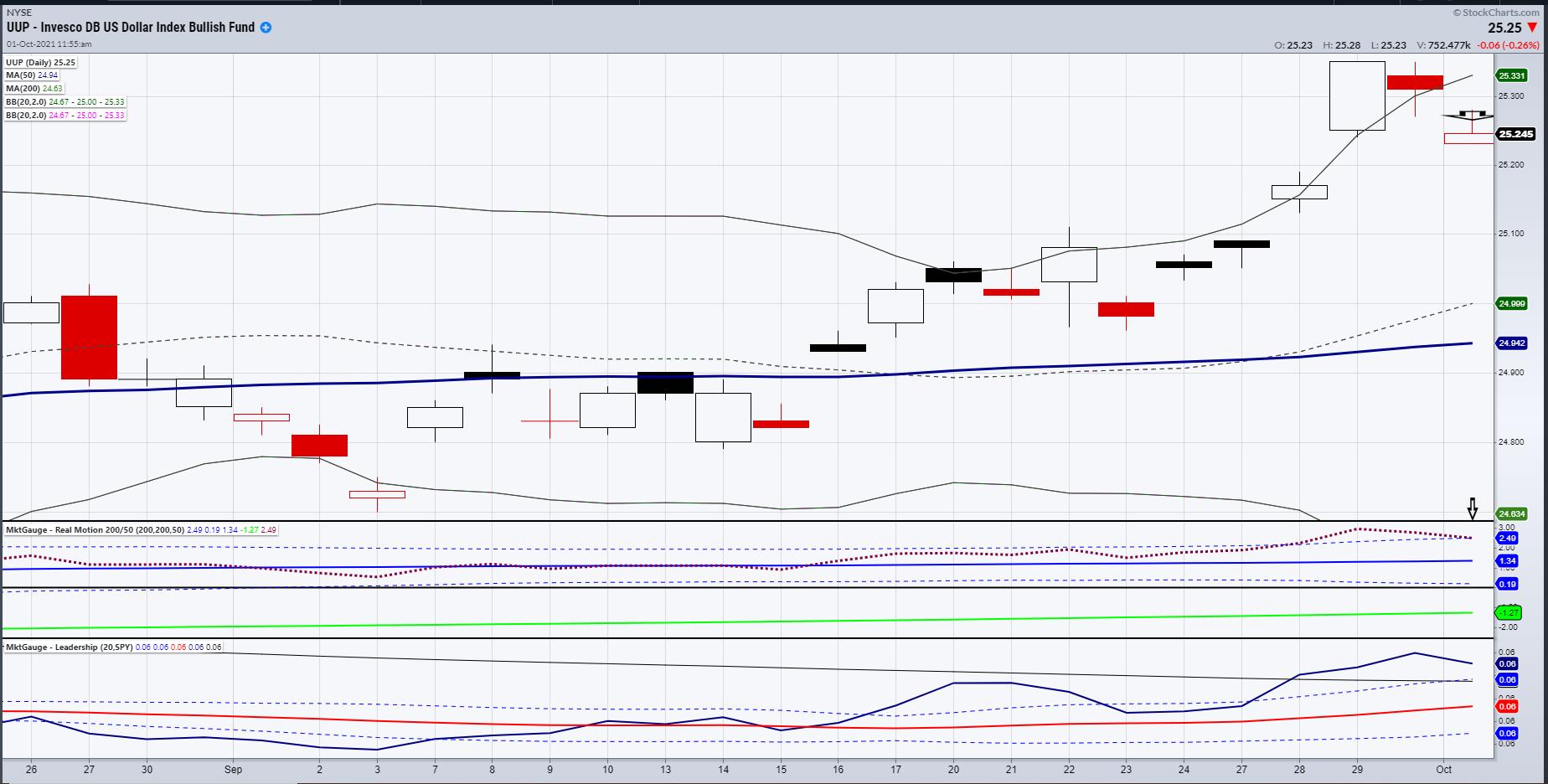 The U.S. Dollar chart, as represented by the Invesco DB US Dollar ETF (UUP), shows some classic signs of a top.

Before I delve deeper into the technicals though, let's look at the fundamental reasons for the dollar rally last week. For starters, China's slowing growth turned the US dollar into a safe haven. The dollar becomes a safe haven as the world's reserve currency. This flight to safety happens when another country (especially China) faces political or economic uncertainty.

Secondly, a decline in debt purchases by the Fed is widely considered positive for the dollar. The Fed is expected to raise U.S. government bond yields, making it more attractive for investors to hold dollar-denominated assets. While a robust dollar can be a sign of economic strength, a too-rapid rally in the currency can also hit the balance sheets of U.S. exporters by making their products less competitive and more expensive abroad.

Interestingly, the dollar rising too fast is nearly as inflationary as when it is falling too fast. In the current environment, goods are scarce to begin with, and now are even more expensive with a stronger dollar.

With all that said, the week ended with four technical reasons the dollar might have stopped going up.

Before we explore the technicals, what are some reasons the dollar might have topped out? The news from China is in the market. Yields fell in the face of some risk in the market, even though the market saw a decent recovery off the lows late Friday. The debt ceiling has yet to be resolved. Perhaps the market is sensing an infrastructure bill passing, that will increase spending thereby adding fuel to the inflation fire. Or maybe it was just too much too soon for the dollar to get so happy, considering that Bitcoin and other cryptocurrencies woke up on Friday along with the overall market.

Here's what we see technically in the dollar and UUP:

This coming week, we will continue to focus on if the dollar breaks down further or not. We will also watch the Transportation sector (IYT) to clear 252 or show that Friday was a one-day wonder. Finally, we will watch Junk Bonds (JNK), as they did indeed break down. However, JNK closed over the 200-DMA and like IYT, held the 50-WMA.

Hence, with some real levels and context to watch for, we have a gameplan regardless of the direction the market runs.

On this week's edition of StockCharts TV's Mish's Market Minute, Mish looks at some top symbols held by Horizon Kinetics Inflation Beneficiaries for new ideas for inflation plays. Of course, Mish adds a few of her own picks as other possible options for an inflationary environment.