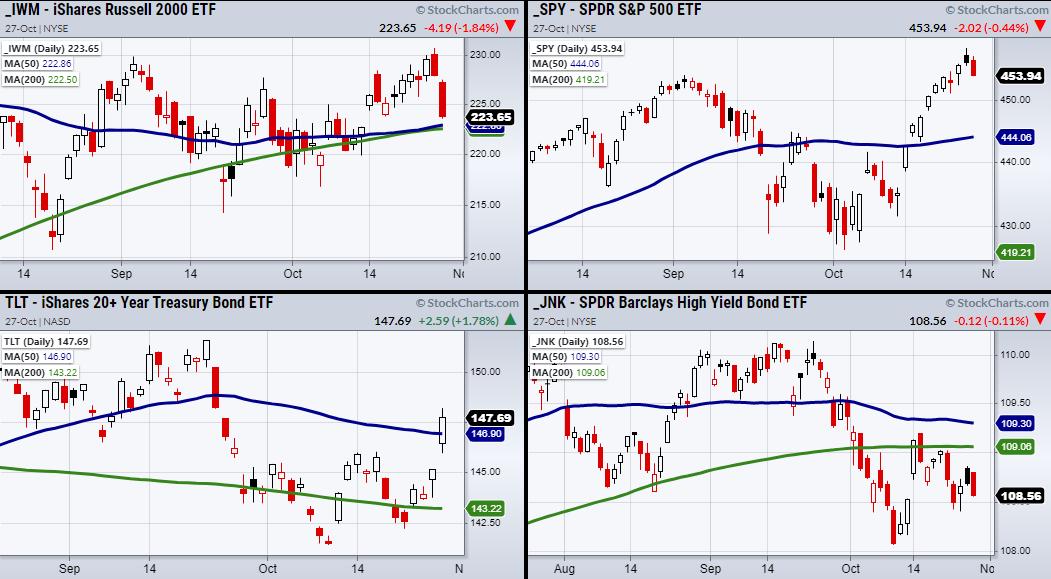 Both the tech-heavy Nasdaq 100 (QQQ) and the S&P 500 (SPY) sit near their recent breakout levels. This is a pivotal place for large-cap companies, as the small-cap Russell 2000 (IWM) has already given up almost two weeks of progress. Now, IWM will look for support from both its 50- and 200-day moving averages sitting near $222.60.

Although it's no surprise IWM was running into major resistance, the recent 2-day selloff shows how large the divergence between large and small-cap companies really are. With that said, other symbols we watch as risk indicators could be flipping along with IWM.

On Wednesday, the 20+ Year Treasury Bonds ETF (TLT) made a huge increase, gapping on the market open and clearing over its 50-DMA at $147.06. Now, TLT looks to gain a bullish phase if it can hold over its major moving average on Thursday. On the other hand, risky High Yield Corporate Debt (JNK) had a small selloff, showing that, while today's price action was weaker than expected, investors are not running for the exits.

So, what does this mean? Large-cap and tech stocks steady themselves near highs while small-caps retreat into choppy territory, losing their upward momentum. Additionally, investors are buying into the safety of long-term bonds, but have yet to completely give up on risky investments with JNK.

The rest of the week will likely have higher volatility as investors are posed with contradictory information. However, since we are near highs in QQQ and SPY, we have clear levels to watch for a breakout or breakdown from.