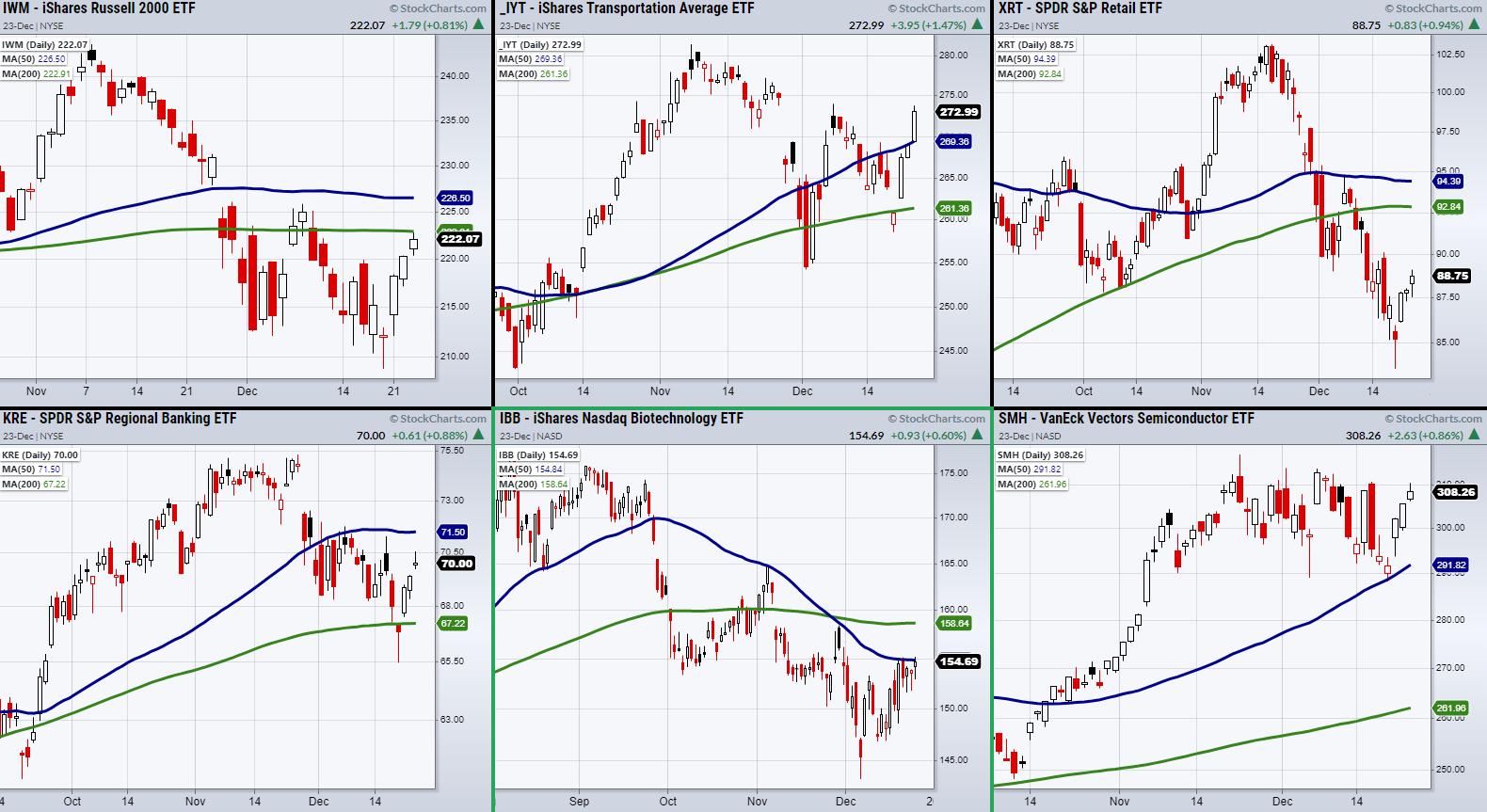 With the holiday weekend upon us, let's take a quick review of Mish's Economic Modern Family for new trends and ideas as we head into the new year.

The Family consists of 7 symbols that show a complete view of the overall market.

To start with, the small-cap index Russell 2000 (IWM) has been able to bounce back from the lows of its range near $208 and is now over $222, which is a great spot to hold for a move higher.

The next two sectors we often pair together are transportation (IYT) and retail (XRT). Because both relate to basic supply and demand, their performance can often foretell general economic stability. Currently, IYT has cleared over its 50-day moving average at $269.36. Over $274, IYT looks ready for another test of the highs; however, XRT has some catching up to do.

While demand through IYT is looking to grow, XRT is showing that supplies are still on the weaker side. On a more interesting note, biotech (IBB) is attempting to break through its 50-DMA at around $155 after a period of lower lows and now some recent consolidation. If IBB can clear and hold its major moving average, it has the potential to run back to the highs of its range near the $170 area.

Having said that, on a less interesting note, regional banking (KRE) is stuck within a caution phase between both its 50- and 200-DMAs. Currently, KRE has major resistance to get through at $71.80. Because KRE is sensitive to interest rate changes, next year could be very rocky, since the Fed is looking to raise rates through next year.

Then we have semiconductors (SMH) nearing the top of its range around $316. SMH will play a special role next year as semi-chip supplies become a leading supply chain disruptor through 2021. If the output from semi-suppliers continues to grow, watch for SMH to clear highs.

Watch the Crypto space! Thursday's price action saw Bitcoin clear 50k. Bitcoin's break over consolidation, paired with a long weekend full of eggnog and family time, means that people will most likely be glued to their phones and more likely to invest in their favorite coins. One altcoin we have been keeping close watch over is SOL, which looks very interesting if it can get through and hold over $190. 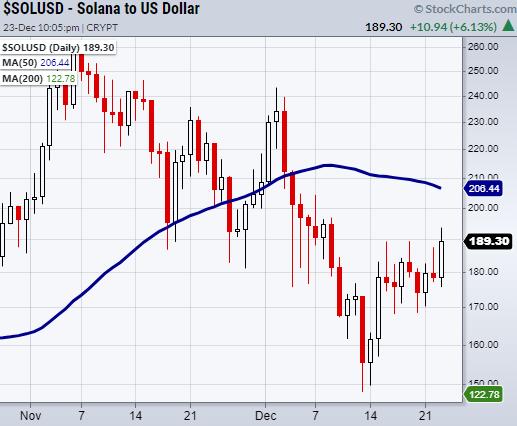 With that said, the overall short-term trend is positive heading into 2022; however, we are not out of the water yet, since most of these key ETFs and IWM are sitting or heading right into resistance from the highs. With inflation increasing, but demand through IYT holding strong, the stock market is looking to push to new highs, but also has internal struggles to deal with. In this case, watch which sectors run to new highs first.

We hope everyone has a restful long weekend, a Happy Holiday, and a prosperous New Year!

Mish hosted the Thursday, December 23rd episode of the "The Top 10 Influential Market Events of 2021" special event on StockCharts TV! Mish highlights the impact of the move that she's seen in many of the raw materials that have to do with food. She shows how the Agricultural ETF (DBA) is not only the most influential move up for 2021 in terms of people's pockets, but, come 2022, it could make the most explosive move higher for investors.