Examining the top gurus of the last 18½ years reveals numerous periods — 1, 2, and 3 years long — when they badly lagged the market. Could you wait? • Every superior investing strategy enhibits ‘cold streaks’ as well as ‘hot streaks.’ Beating the market requires doing something the market isn’t. Understanding tracking error gives us the only way of standing it. 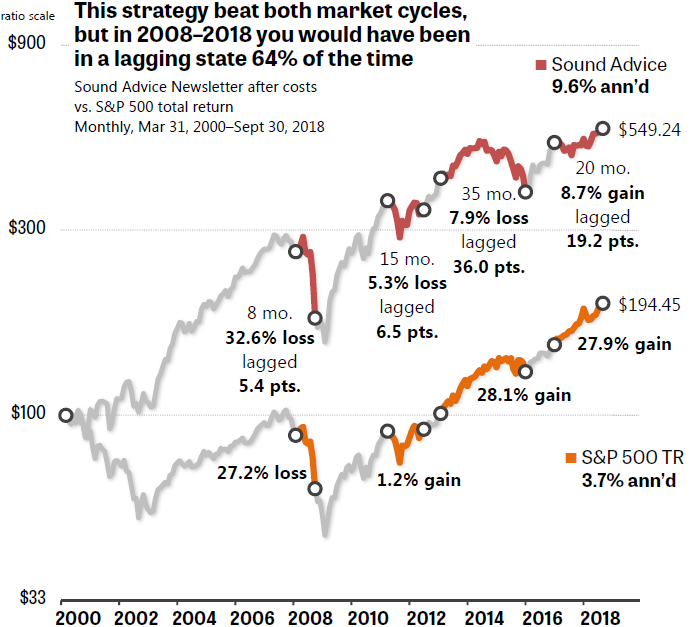 Figure 1. The Sound Advice Newsletter outperformed the S&P 500 in both of the last two market cycles. But in the latest regime, you might have felt like the strategy had “stopped working” if you compared returns during 64% of the months along the way.

In response to readers’ requests, I’m publishing monthly performance graphs today for all six winners of Mark Hulbert’s 2018–2019 Honor Roll. The honorees are those investing newsletters or services that have outperformed all others, based on Hulbert’s tracking, in both bear and bull markets. (This year’s winners did an outstanding job of surpassing the S&P 500 in both of the last two bear-bull market cycles. But beating the index is not Hulbert’s requirement to make the list, only relative outperformance vs. all other newsletters.)

Let me reiterate that I’m not recommending any of these newsletters. I’m showing you their actual month-by-month performances here as a way of illustrating the findings of a Hulbert study and a Vanguard white paper. As I explained in Part 2 of this series, both of these studies showed that virtually every newsletter and mutual fund that exceeded the market’s return over the long term perversely subjected investors to serious periods of underperformance for five years or more. There’s no such thing as a superior strategy that beats the index every month or even every year. If such a beast existed, it would quickly become overused and stop working.

Figure 1 demonstrates this fact with one of the Honor Roll winners. The Sound Advice Newsletter outperformed the S&P 500 in both of the past two bear-bull market cycles. In the latest cycle, SA’s gain was 88.5%. That barely squeaked past the index’s 88.1% — but a win is a win. (Note: All numbers in my column are total return, reflecting the reinvestment of dividends. Hulbert subtracted broad estimates of expenses from each newsletter’s return but not from the S&P 500.)

The bad news is that it would have been very tough for mere mortals to have stuck with Sound Advice from 2007 on. As shown in Figure 1 with red lines, your portfolio would have lagged the market between a worrisome 5 percentage points and a horrendous 36 percentage points, if you’d compared your account’s performance against the S&P 500 during four periods as lengthy as 1, 2, or 3 years. Imagine the index being up 28.1%, but your portfolio being down 7.9% during three years of the 20-teens’ roaring bull market! That would exhaust the patience of many people on that newsletter. But Sound Advice (like the other Honor Roll winners) had “hot streaks.” These made the advisers pull ahead of the index over the only period that proves anything: a complete market cycle.

As I explained in my Muscular Portfolios summary, 100% of financial institutions that hire outside money managers fire them after as few as three years of underperformance. About 40% of the institutions fire lagging managers after just two years, and another 40% after as little as one year! Individual investors are just as skittish about their advisers, if not worse.

The main conclusions from my study

After I analyzed the month-by-month performances of the Honor Roll winners, some conclusions became clear. The reasons I can’t recommend any of the advisory newsletters are many:

Figure 2. Every newsletter subjected investors to losses far beyond the 25% “behavioral pain point.” And each newsletter had unpredictable “cold streaks” that lasted a total of three to six years or more over just the 12¾ years beginning in 2006.

Use today’s graphs to understand and master tracking error

My graphs for all six Honor Roll winners, such as Figure 1, use a ratio scale (also called a semilog scale). When two portfolios both have the same gain, such as 5%, a ratio scale shows the rise with two lines that have the same slope. This makes comparisons easy. It doesn’t matter which portfolio happens to hold more dollars than the other.

The vertical dollar amounts on the left axis of a ratio scale increase by multiplication. In today’s case, each horizontal gridline represents a dollar amount that’s 3 times the gridline below it. The labels on the vertical axis increase like so: $100, $300, $900, and so forth. In a linear scale, the dollar amounts are additive: $100, $200, $300, $400. A ratio scale should be used whenever one portfolio quadrulples in value or more (growing from $100 to $400, for example).

By contrast, I used linear scales to illustrate the Investment Reporter in Part 2 of this series and the Investor Advisory Service in Part 4. You can look back at those illustrations and compare them with the ratio scales in today’s graphs.

Gains like these are not certain to continue. In a separate study, Hulbert showed that an adviser needs to perform in the top one-fourth of all advisers for 15 years for there to be a 50% probability that the adviser will also be in the top one fourth in the next 15 years. Even a decade-and-a-half of outperformance gives you only a coin flip’s chance that it will be repeated.

To use the existing data set as an example, Sound Advice was statistically tied with the Investment Reporter for the best performance of all six newsletters in the 2000–2007 market cycle (gains of 191.45% vs. 196.82%, respectively). But Sound Advice delivered the weakest performance of the six in the 2007–2018 cycle. Stick with simple, low-cost, multi-asset ETF strategies that can be followed in a 401(k) or any kind of investment account. 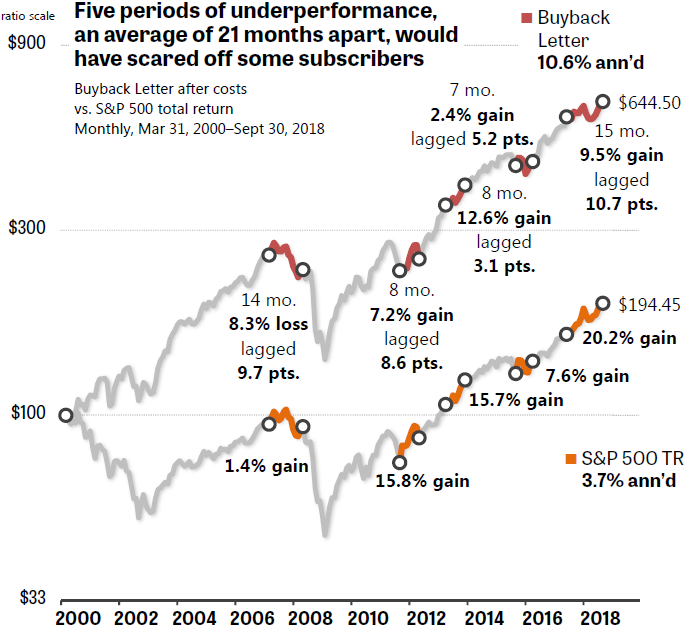 Figure 3. Just after the Buyback Letter had a period of good performance, it subjected followers to underperformance in a following period, lagging the S&P 500 by 9 to 11 percentage points in most cases. 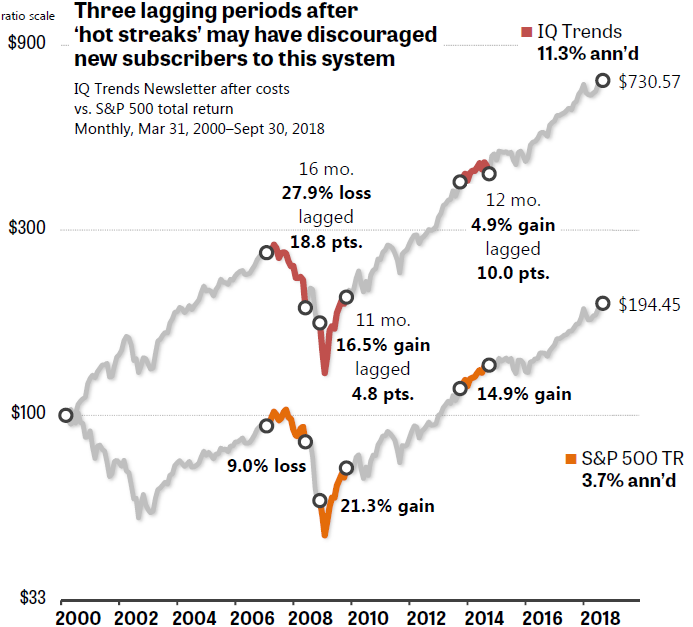 Figure 4. IQ Trends had three long periods of underperformance, lagging the index by 5, 10, or 18 percentage points on those occasions. 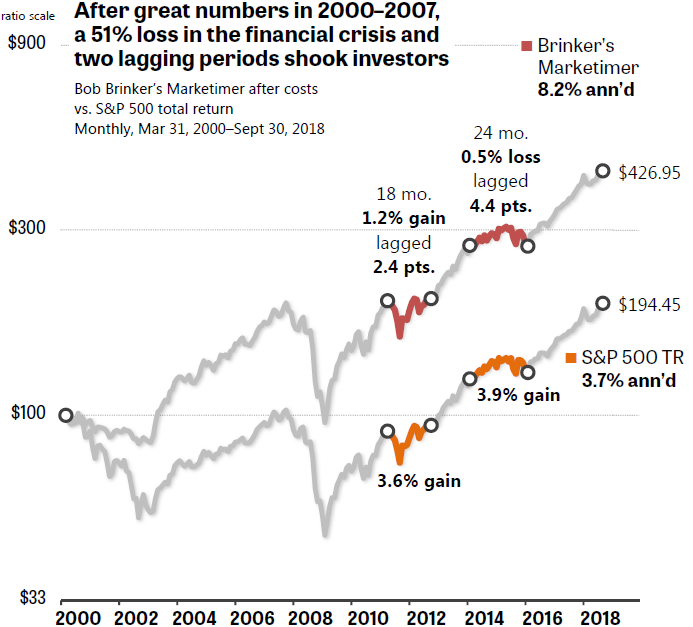 Figure 5. Bob Brinker’s Marketimer had the fewest distinct “cold streaks” of the newsletters in this study — two — but one lasted for a year-and-a-half and the other for two years, long enough to convince some people that the system had “stopped working.” 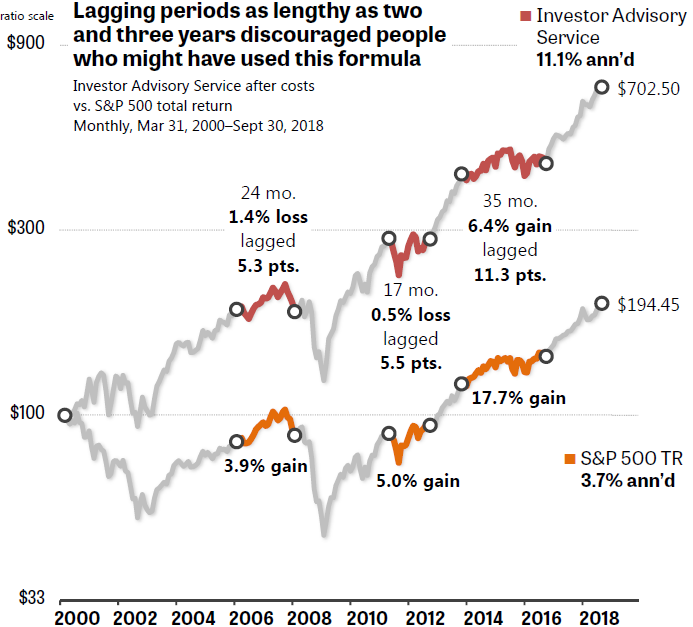 Figure 6. The Investment Advisory Service had only three major periods of underperformance, but in two of those cases the strategy actually lost money while the S&P 500 made money. 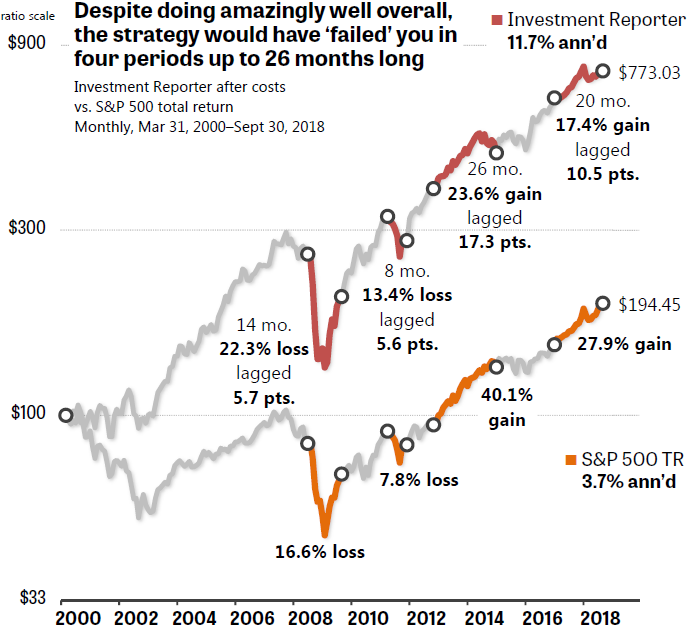 Figure 7. The Investment Reporter had the best overall return in the Honor Roll (11.7% annualized). But its four major periods of underperformance fiendishly occurred immediately after “hot streaks,” exactly when new followers would have signed up.