Perhaps you’re tired of the fact that one fund you hold is underperforming the market. Should you switch now or forever hold your piece of the pie? • Don’t make a move till you’ve read this article. Most of the time, the securities we sell outperform the ones we buy as replacements. Don’t let your mind play tricks on you.

Figure 1. What do we perceive when we hear the market calling? Probably a wrong number.

Financial institutions that hire outside money managers are infamous for making poor choices. One well-known study found that 100% of such institutions terminate the contracts of independent managers who underperform their benchmarks for as little as 1, 2, or 3 years. (State Street Global Advisers, 2016, P. 16.) The joke is that the newly hired managers go on to perform no better than — or worse than — the fired managers the institutions could have simply retained. (Goyal and Wahal, 2008.)

Now, we have new evidence that individual investors make the same mistakes as professional financial executives.

Morningstar, the giant financial services firm, studied more than 15,000 actively managed equity mutual funds over a 23-year period, 1996 through 2018. What the researchers found may shock you. 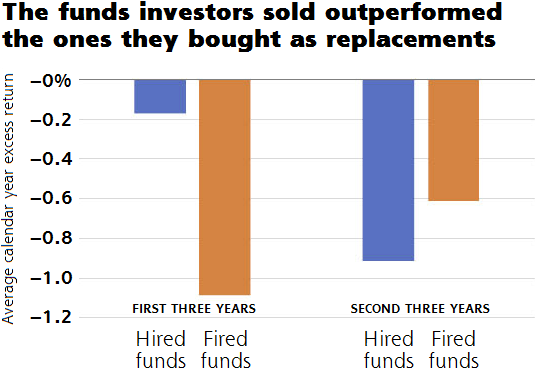 Figure 2. The funds that investors “hired” (purchased) had almost matched their benchmarks in the past three years. The “fired” (sold) funds had lagged by 1.1% per year. Yet the purchased funds did more poorly than the rejected funds in the following three years. Source: Morningstar.

Figure 2 shows the results of the Morningstar study. The money flows of the 15,000 funds revealed people purchased funds that had almost matched their benchmarks in the past three years. These favored funds had underperformed their indexes by less than minus 0.2% per year — hardly noticeable.

By contrast, investors ditched funds that had larger underperformances. The sold funds’ average “excess return” over their benchmarks was minus 1.1% per year.

Switching to a different fund, however, didn‘t work out well for people. In the following three years, the acquired funds lagged their benchmarks by about 0.9% annually. The funds that investors abandoned did much better, trailing their indexes by only 0.6%. (That’s actually pretty good, considering that mutual funds impose annual fees and must bear trading expenses. Both things reduce their performance below that of indexes.)

The mind is a terrible thing to use to pick investments. Market strategies that have a “hot streak” often revert to average and suffer a “cold streak,” and vice versa. We saw in my Mar. 5, 2019, article that our minds perceive things that are not there, and we jump to faulty conclusions when presented with financial decisions.

What’s the solution? The answer is to decide on a mechanical formula in advance, and then only make automatic investment moves — without relying on our all-too-fallible human brains.

In Part 2 of this series, we’ll examine exactly how to do that, and what the benefits for our portfolio return can be.

To read the entire Morningstar analysis, see the firm’s article by Jeffrey Ptak, CFA. (To read the full study requires a free registration.)