During periods of market shocks, your money should be in something other than equities. But exactly what, without using your emotions or market timing? • With 21st-century tools, we can now use low-cost index funds to make a safe port in any storm. 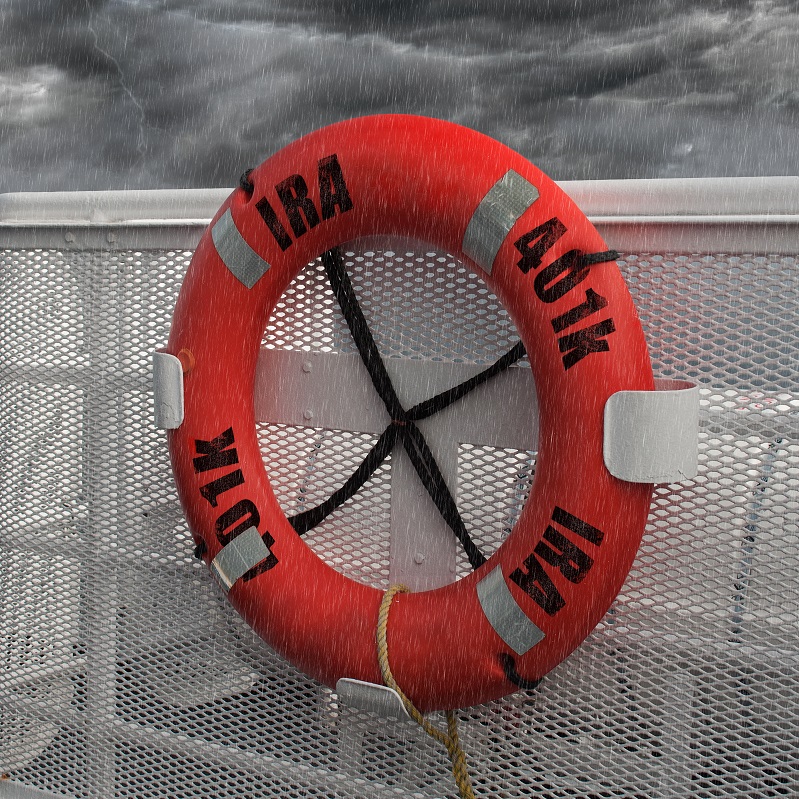 Figure 1. A simple rule to allocate your money in any market conditions can be a lifesaver for your life savings. Photo by Eric Baker/Shutterstock.

In Parts 1 and 2 of this series, we saw that "wild" days — times when the S&P 500 either rose or fell more than 3% in a single session — usually indicate that equities are in a correction or a bear market, or will be relatively soon. Erratic moves greater than 3% up or down almost never occur during long bull-market rallies.

The good news is that individual investors don't need to worry about whether a wild day signifies that you should hold on tight, panic, or something in between. You don't have to make a seat-of-the-pants decision or attempt market timing. Today's low-cost exchange-traded funds make it simple for investors to gradually tilt their portfolios into asset classes that are going up and out of assets that are going sideways or down.

This simple allocation method is known as asset rotation. Inexpensive index funds and brokerage firms with tiny trading commissions (or even commission-free ETFs) have taken over. This finally makes it cost-effective for investors to change their positions once in a while as market conditions dictate. (It's hard to remember now, but back in the 1970s and 1980s, mutual funds commonly charged a "front-end load" of 5% or more. Selling one stock and buying another typically cost you as much as 2% of your capital. Almost any transaction, therefore, subjected you to a severe haircut. By comparison, we're enjoying today an investing paradise with ultralow trading expenses.)

What's wrong with market timing? Nothing, if you have an ironclad formula that guarantees you'll switch out of equities on the right date and switch back in on the perfect date in the future. (Market timing means switching between 100% equities and 100% cash, based on an indicator.)

Unfortunately, it's difficult if not impossible to prove that such a system will protect your wealth when you need a safe harbor, even if it worked in the past. Mark Hulbert, founder of the Hulbert Financial Digest, studied the record of 81 market timers from 2000 through 2014. Of the 11 gurus who did the best in the 2000–2002 dot-com bear market, Hulbert said, "These market timers have lost so much since then that, on average, they are in the red over the entire period since March 2000, having chalked up a 0.8% annualized loss." In the same period, the Wilshire 5000, which indexes the entire US market, gained 4.2% annualized. (All numbers include dividends.)

Asset rotation doesn't require market timing. Instead, the strategy gradually fine-tunes your portfolio. An objective, mechanical, asset-rotation formula occasionally instructs you to sell one ETF that's no longer a top performer and buy a different ETF that is demonstrating greater relative strength (also known as momentum).

In Parts 1 and 2 of this series, we saw graphs correlating the US market's performance in the years 1997 through 2014 with that period's wild days. Since then, from 2015 through the present day, we've enjoyed one of the longest, sustained bull markets in history. These years have seen relatively few wild days — but investors now have good reason to be fearful once again.

There were only three wild days in 2015, just one in 2016, and none at all in 2017. However, there have been six wild days in just the past 10 months. Five of them were giant up or down moves during the interest-rate-hike tantrum/correction of October and December 2018 and the relief rally that finally took hold in January 2019. But the greatest concern for investors today is the most recent wildness. Just three days ago, as I write this, the S&P 500 plunged 3% on Aug. 5, 2019.

How can we protect our life savings against the painful correction or agonizing bear market that's likely to come?

As you may know, I've been working on a career project I call "Goldilocks investing." This is an effort to identify investing strategies that are not too risky, not too tame, but have great gains. Specifically, these strategies must have market-like returns over complete bear-bull market cycles but never lose more than 20% or 25% when measured between any two month-ends, even when the S&P 500 is crashing 40%, 50%, or more.

Two such Goldilocks-type strategies, as I describe in my one-page summary of Muscular Portfolios, are called the Mama Bear Portfolio and the Papa Bear Portfolio. You might ask, "How are these two portfolios handling the market's craziness in the past few months, battered as we are by the current US-China trade war, economic slowdown fears, and an earnings recession?"

Remarkably, these two muscular-investing strategies actually went up when the S&P 500 collapsed 6% in just six market days, from the July 26 close to the Aug. 5 close. 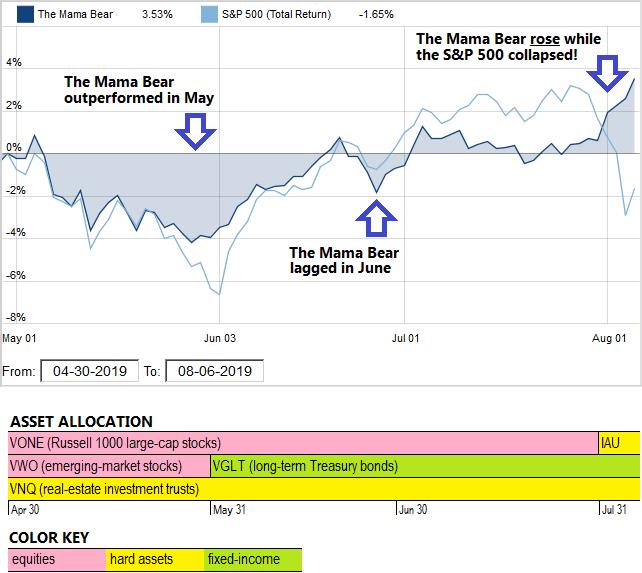 Figure 2. Typical of successful long-term investing strategies, the Mama Bear Portfolio underperforms the S&P 500 when the market is up, but outperforms it when the market is down or sideways. This combination leads to market-beating returns over complete bear-bull market cycles. For example, the Mama Bear is up in the past three months, whereas the S&P 500 is down. Source: FolioInvesting.com.

Figure 2 shows the real-money performance of the Mama Bear Portfolio during the past three months of gut-wrenching market action. The S&P 500, including dividends, is down 1.65%, while the Mama Bear is up 3.53%.

The numbers and the graph are provided by FolioInvesting.com. I maintain real-money trading accounts at Folio in order to provide a track record of each strategy's performance. The Papa Bear Portfolio achieved almost the same results, being up 1.01% during the period, compared with 3.53% by the Mama Bear. (I publish monthly gains and losses for the strategies, updated in January each year, on the Muscular Portfolios data page.)

How can a portfolio go up when the S&P is collapsing, while not betting its owner's wealth on all-or-nothing market timing?

The answer is provided in the colorful Asset Allocation bars at the bottom of Figure 2. For users of Muscular Portfolios who checked the website and were making any recommended changes on the last trading day of the month, the following tune-ups occurred:

Think back. On July 26, when the S&P 500 hit a new all-time high, who was telling you to get out of equities and move into safer assets that would continue going up when the index plummeted? Almost no one. That's the beauty of a mechanical formula. It doesn't care how euphoric most people might be about the market. The strategy simply tells you when other asset classes around the world are doing better.

Notice that the Mama Bear required only two position changes during a period of three months. This kind of gradual shifting from weaker ETFs to stronger ETFs is a feature of the best asset-rotation strategies. For one thing, monthly check-ups fit within the restrictions that face millions of owners of 401(k) plans and other tax-deferred accounts. These investors are usually prohibited from making trades more than once or twice a month — and even then, they may be able to purchase only index funds within the plans, not individual stocks.

If you choose to follow an asset-rotation strategy, no one requires you to reallocate it on the last trading day of the month. You can choose any day of the month you like — perhaps your payday, your birthday, or any recurring interval that you'll easily remember.

The only caveat is that the financial expert who first documented what Goldilocks investing calls the Mama Bear — Steve LeCompte of the CXO Advisory Group — studied the results of executing the tune-up on each different day of the month over a 12-year period. The gains were slightly higher and drawdowns smaller if the changes were made in the first two or the last seven trading days of each month. (The differences might be influenced by chance, however — the most important rule is simply that you remember to make the changes every 30 days, whatever day of the month you select as your reminder.)

Anyone can see the rankings of which ETFs are currently the strongest — with a fully disclosed formula that's absolutely free of charge — on the Mama Bear and Papa Bear pages.

Of course, the rankings don't change only on the last trading day of each month. The website recalculates the rankings every 10 minutes during market hours. Just to be clear here, be aware that the rankings sometimes don't change for weeks at a time. (This is long-term investing, not day trading.) Even so, a small calendar widget at the bottom of the rankings table allows you to see how each ETF ranked at the close of every market day going back about three months.

For instance, The Mama Bear sold emerging-market equities and began recommending long-term Treasurys as early as May 2, not May 31. Similarly, the rankings dropped US large-caps and recommended gold as early as July 17, not July 31.

The exact dates of the changes don't matter at all. Both of these portfolio tune-ups occurred far enough in advance that the Mama Bear Portfolio actually rose from June 30 through Aug. 6 — not cave in, as the S&P 500 did. (The Papa Bear also rose during that period.)

Don't trade more often than once a month, even though the rankings are constantly updated. Trading once a day or once a week, for example, would negate the effect of long-term momentum and eat up your savings through commisions and trading frictions, such as bid-ask spreads.

Fortunately for us, the advantages of long-term asset-rotation investing strategies are not likely to be eliminated due to overuse by an eager public. Most people are simply not patient enough to lag the S&P 500 during a long bull market, as Buffett does, even though their portfolios would pull ahead of the index by the end of the subsequent bear market. Human nature doesn't permit most investors to exhibit that kind of fortitude.

Therefore, most people will never adopt asset rotation — they'll jump instead from one disappointing strategy to another every couple of years — but that means you can use asset rotation for as long as you like.