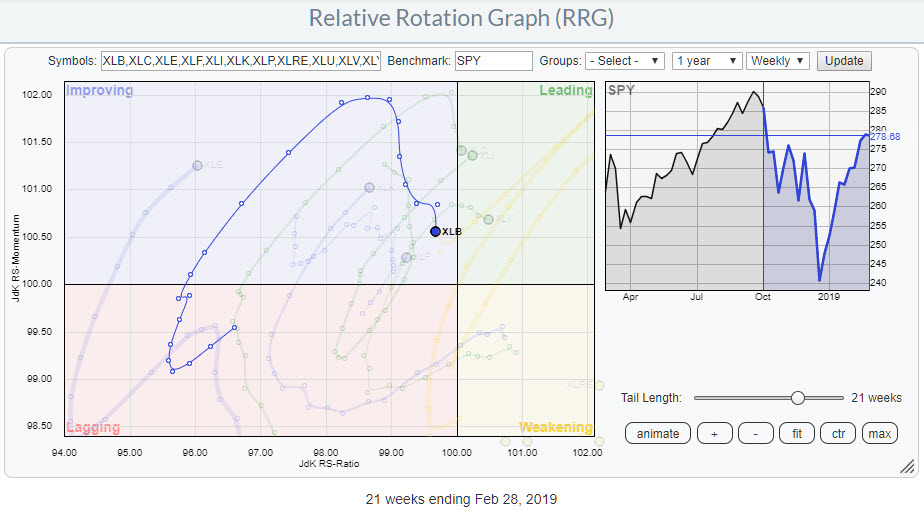 The chart above shows the weekly rotation for the Materials sector, XLB, within the universe of US sectors against SPY. After the tail turned upward inside the lagging quadrant, XLB kept up with the performance of SPY and moderately outperformed the market until the sector started to lose relative momentum again in the week of 21 Jan and 28 Jan when the tail started to roll over downward again without having reached the leading quadrant.

This loss of relative momentum, declining Jdk RS-Momentum, is still ongoing and pointing the tail on XLB towards the lagging quadrant again.

Assuming a normal clockwise rotation the sector can be expected to return towards and into the lagging quadrant in the weeks to come. 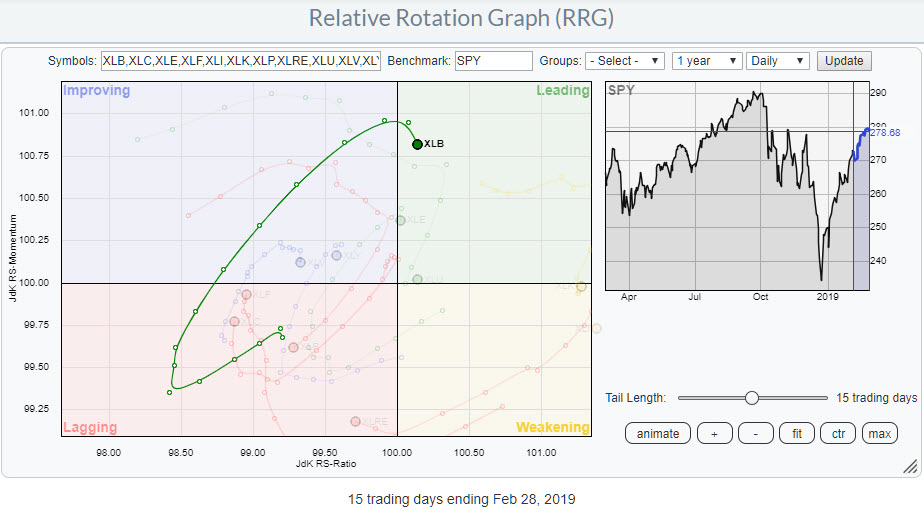 On the daily Relative Rotation Graph, the curve looks very similar to the weekly image. The only difference here is that XLB has just crossed into the leading quadrant.

In general crossovers from improving into leading are positive, especially when they occur backed by strong relative momentum. Ie also rising on the JdK RS-Momentum scale.

That is not happening here. The crossover from improving into leading on the daily RRG happened while RS-Momentum already started to decline. It seems that there is not enough fuel left to push the XLB-tail deep(er) into the leading quadrant.

This combination of rotations on the daily and the weekly RRGs suggest underperformance for the Materials sector in the coming weeks. 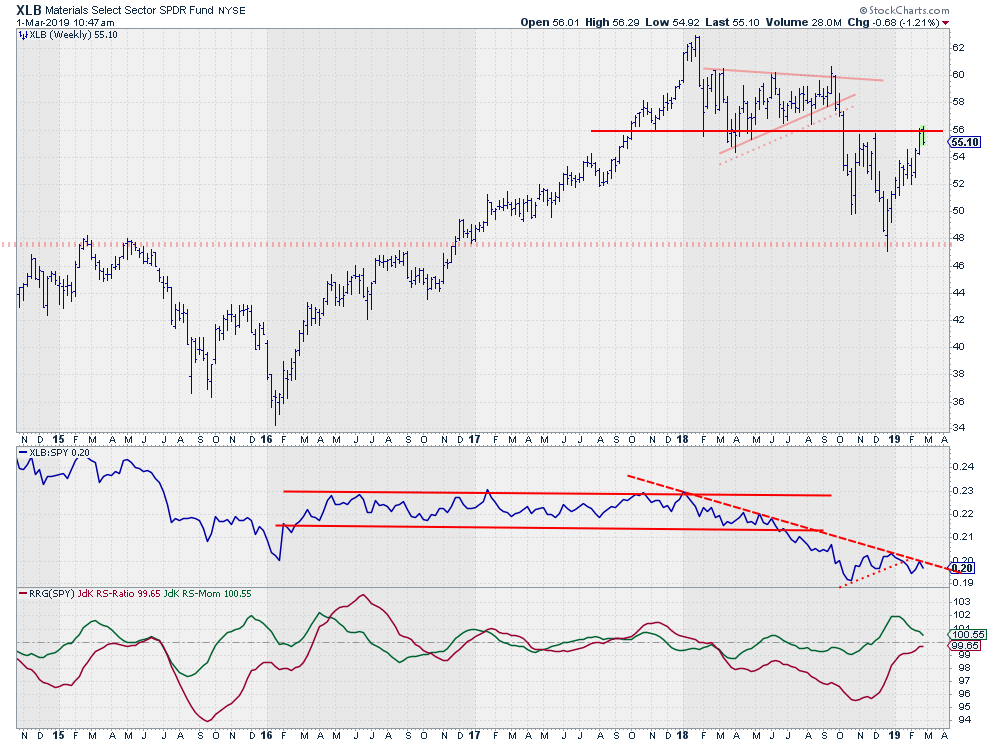 The chart for XLB shows the deterioration of the sector since the beginning of 2018. The sideways, triangle-like, formation from March to October eventually broke to the downside, sending XLB back to support near $48.

Together with the market, XLB rallied out of that low to current levels. From a price perspective, the area around $56 is now expected to provide serious resistance and seems too hard to take out at this moment.

The relative strength line is still moving in the downtrend that started after it left the horizontal range in which it was for more than two years. The recent recovery in the RRG-Lines comes from the sideways movement after reaching the relative low in October last year.

Just like on the price chart the overhead resistance, coming from the falling resistance line over the highs since January 2018, seems too hard to break for now. This makes a further improvement in relative strength, and thus the RRG-Lines, questionable.

Assuming that the overhead resistance in relative strength will not be taken out the Jdk RS-Ratio line is likely to turn around soon, dragged down by weak RS-Momentum, and turn at a level below 100. This will send XLB back into the lagging quadrant on the Relative Rotation Graph. 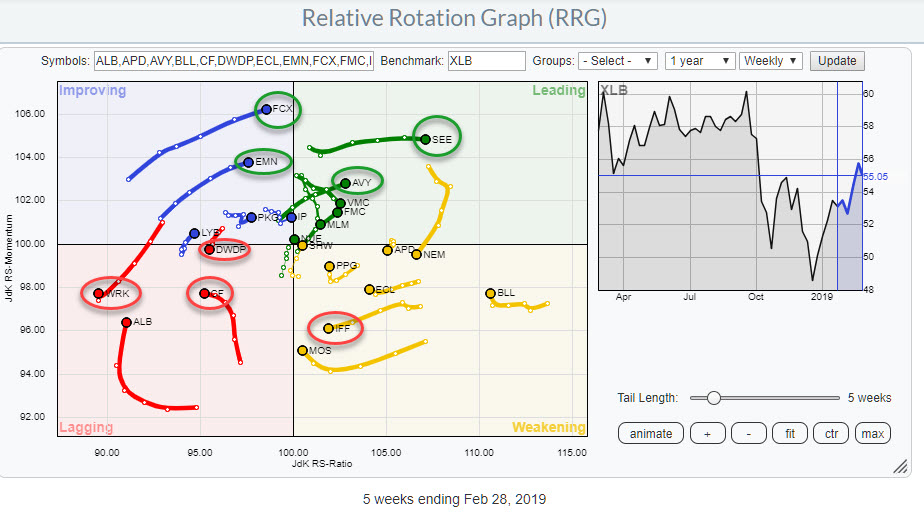 The weekly RRG above shows the stocks inside the Materials sector plotted against XLB as the benchmark.

A few interesting tails have been highlighted as potential positives, at least outperforming XLB, and negatives, likely to do even worse than XLB.

The daily RRG below only shows the highlighted stocks from the graph above. 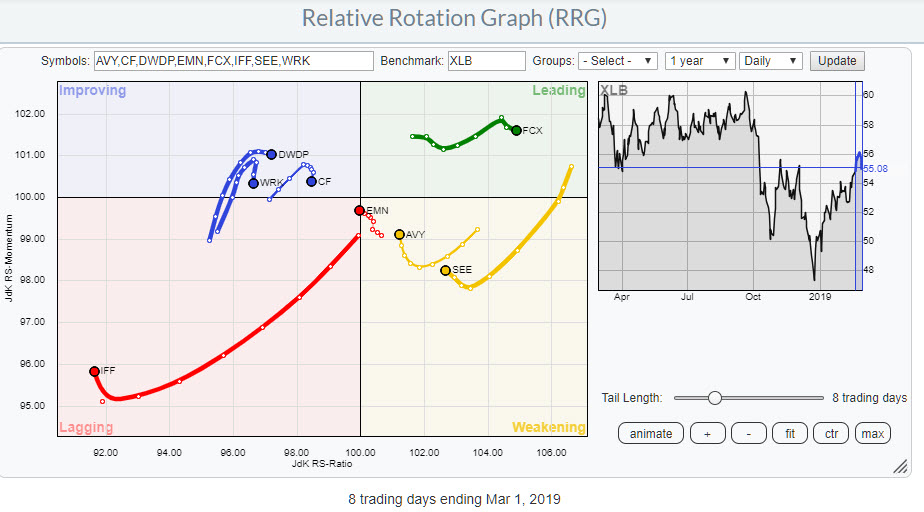 Linking the observations from the daily RRG to those on the weekly leads me to the following takeaways.

WRK : The recent rotation from lagging to improving on the daily RRG seems short-lived as the tail has already turned around and is now heading towards lagging again. This confirms the weak rotation on the weekly RRG where a similar rotation was completed a few weeks ago. More, relative, weakness is expected.

CF : On the weekly RRG, CF moved higher on the RS-Momentum scale while inside the lagging quadrant but recently started to bend left again to also continue lower on the RS-Ratio scale. The daily tail on CF is inside the improving quadrant but turned around over the course of the last five trading days. This rotation will very likely reinforce the negative rotation on the weekly time-frame and push CF deeper into the lagging quadrant.

IFF : This stock is inside the weakening quadrant and heading towards lagging on the weekly time-frame but deep inside lagging on the daily RRG. After a strong push into lagging the tail has just started to curl up a little bit. This can give some relief from weakness in coming days, maybe a week or so, but the low readings on the daily RRG are suggesting that more weakness is ahead for IFF on the weekly time-frame as well. A rotation into lagging seems a matter of time. 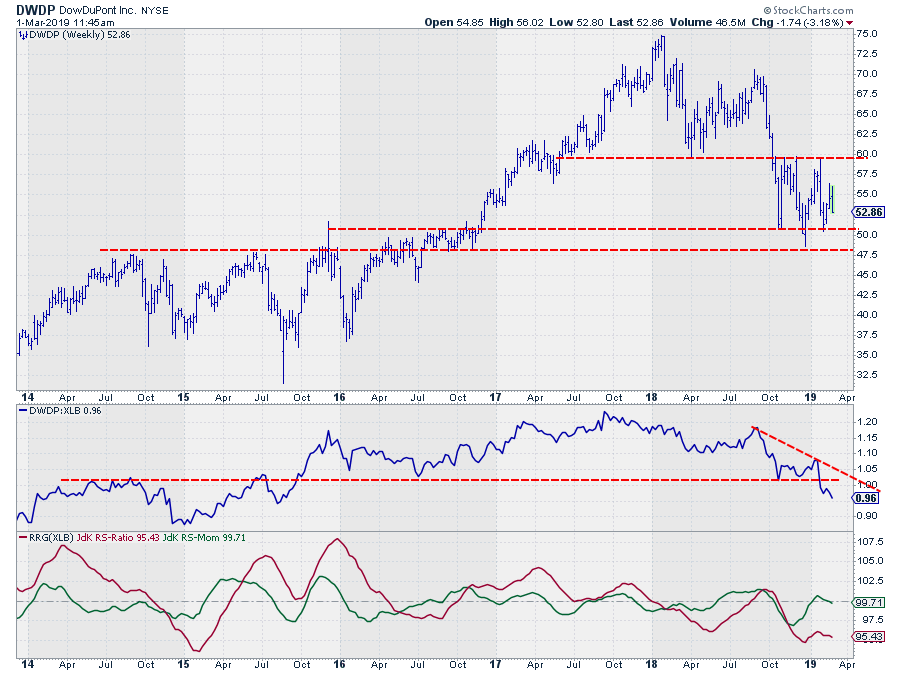 The break below the major horizontal support/resistance line on the relative strength line is the most important observation on this chart. This move will very likely trigger more relative weakness and can send RS to levels last seen in 2015.

The RS-Momentum line has just turned around after only a handful of weeks inside the improving quadrant.

A similar rotation is now taking shape on the daily RRG where the tail had entered improving seven days ago but already started to roll over again.

On the price chart, DWDP is contained in a range between $50-$60 roughly. Breaking support near $50 is a first new sign of weakness while taking out $47.50 opens up the way to much lower price levels.

FCX : Has turned around the downtrend that was in play for all of 2018 after taking out the highs of late December and early January. The same is happening in the relative strength line. RS-Momentum has already moved above 100 and RS-Ratio is now following for a gradual further rise. With the tail on the daily RRG moving steadily higher on the RS-Ratio scale, an entry into the leading quadrant on the weekly RRG is expected soon.

SEE : Sealed Air Corp. is moving almost horizontal in the leading quadrant. Continuing improvement of relative strength at steady momentum. The rotation of the daily tail inside the weakening quadrant is expected to start adding additional relative strength soon which will push SEE even further up the RS-ratio scale. This synchronized rotation follows after a three-year-long downtrend in relative strength that started mid-2015 and has now turned around. There is some overhead resistance on the price chart looming around $45 and then just below $50 but the rhythm of higher highs and higher lows is underway. 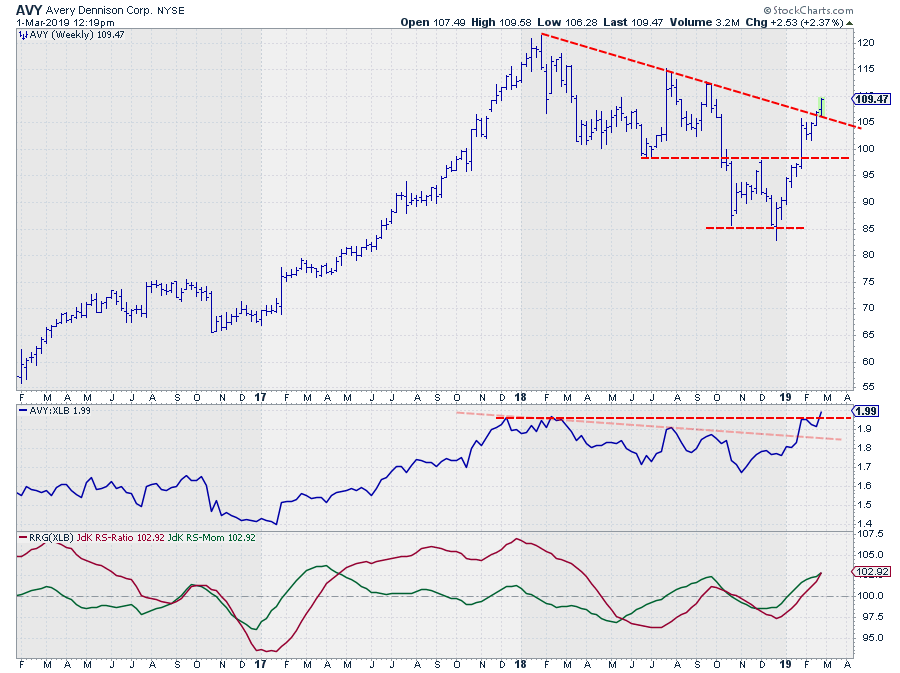 We can expect support from the price chart where the falling resistance line has just been taken out and the price is moving higher. $115 and $120 are resistance levels to watch.

The RS-line (middle panel) is breaking higher. The shaded, down-sloping, resistance line has already been cleared comfortably and the horizontal level, more important IMHO, seems to be giving way at the moment.

All in all, this makes AVY a strong stock inside a weak sector.