A sort of 'indecision pattern' - may be a weekly interpretation prevailing at 2015's first week's end (along with a late fade as desired Friday); while most internals suggest there is a bias to sell the rallies more than buying any dips. We nailed the sharp decline before and into the New Year; as well as gains, virtually on the lows, before snapback; then expected a pre-weekend fade. 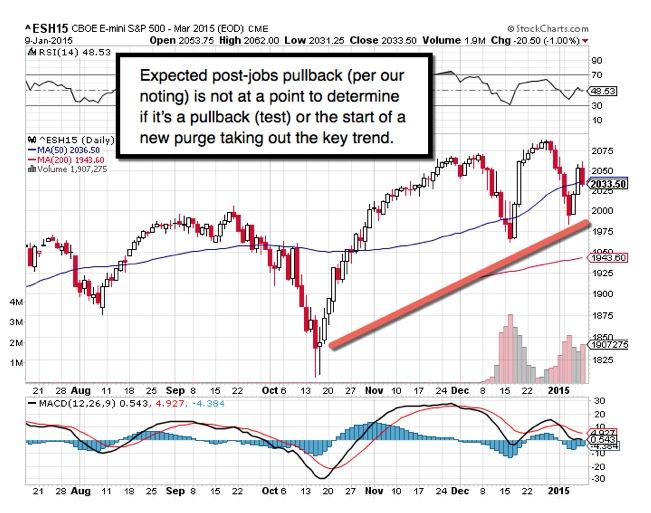 Many are debating jobs, inflation / deflation and growth rates; but the reality is that the deflation trap has already been sprung. Look at base metals, not just petroleum and then look at many agriculturals. As previously observed, the downward price trend on all commodities has become ingrained; we're thinking because of the (factors noted that are generally unattributed). 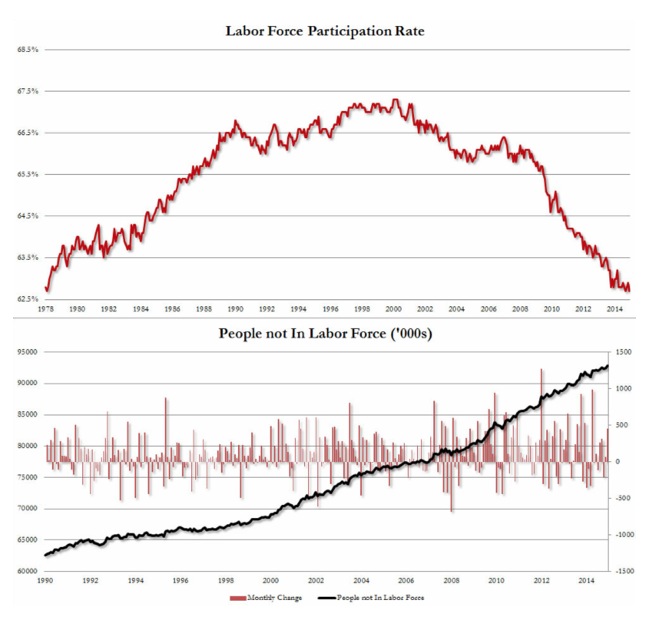 A question is whether this will bleed over to the asset classes of real estate then equities as this year moves forward. We suspect it's a serious risk as a very few asset classes remain basically intact. Another concern: the tepid confirmation from this mornings BLS report which showed declines in wages month-over-month. Much of this relates to the (note the specifics) high jobs among the elderly; not just kids working during the holiday season. 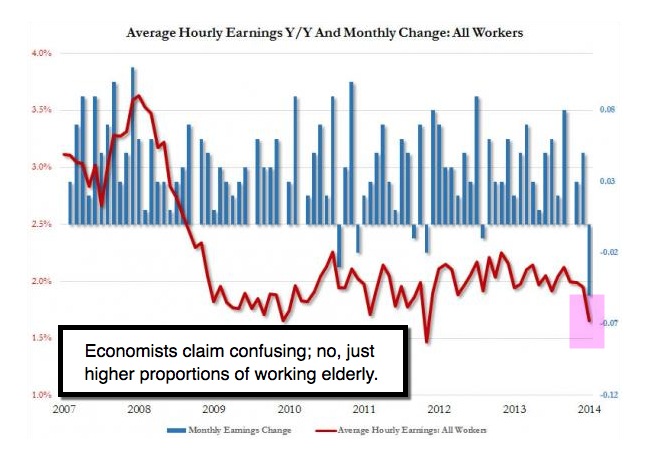 It was a bit curious hearing economists debate the issue; as if there was a mystery about today's report. It's labor force participation; and segmenting jobs increases as mostly among the 55-year and older workers. But a valid point historically is that once wage deflation, or disinflation takes hold it can accelerate; so if the market breaks on that; (forecast for our members). 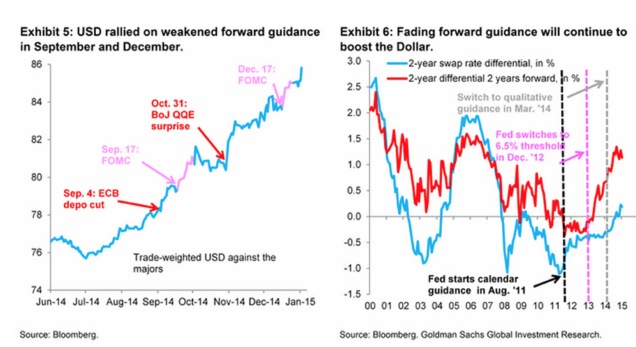 The basic situation remains a probability of 'lowered estimates' both for lots of companies and growth rates; all contributing to a stronger Dollar (that's a part of the 'relative' better position of the USA and our year-long forcast for a persisting Dollar advance from 79's, and Euro decline from right at 1.40; now around 1.18); and Oil groping for a bottom; but (balance of topic).

Next week has several economic reports and regional Fed updates; these may highlights the overall sluggishness that persists. Car sales remain very strong; but note the increase in loan delinquencies. Consumers overall are not as 'whole' as portrayed; and the societal disparity absolutely persists.

As to our comments earlier this week about low 'liquidity' allowing for sharp moves in both directions; here's the range for S&P and VIX. We retain our overall March S&P 2078 short; have taken huge downside midweek gains before the expected snap-back (which then accelerated for a few hours just on the back of the 'Fed save us forever' hopium after Chs. Evans spoke). It's sad that Wall Street is only pleased when data appears suggesting things are so miserable that they need more Fed action. 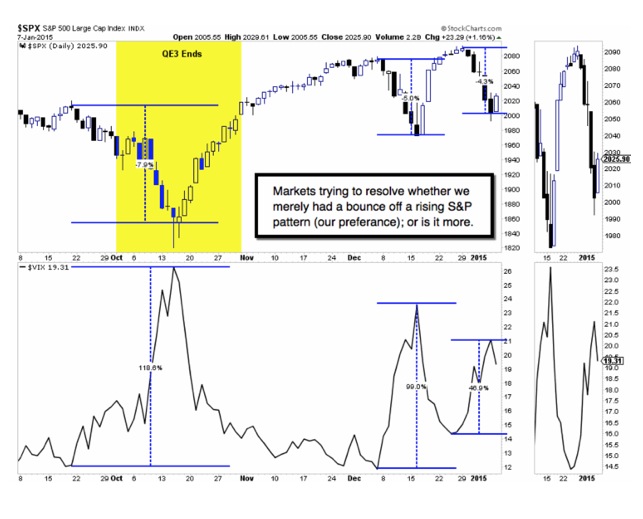 Daily action - indicated Thursday the probability of selling into the Jobs lift; of which there wasn't much, given futures defensive in overnight trade. The final effort to fade the market did appear; after hours of lateral rangebound behavior from the morning sell-off being cut-in-half, before resuming rapidly in the final hour. We expected a late fade ahead of a tense weekend. 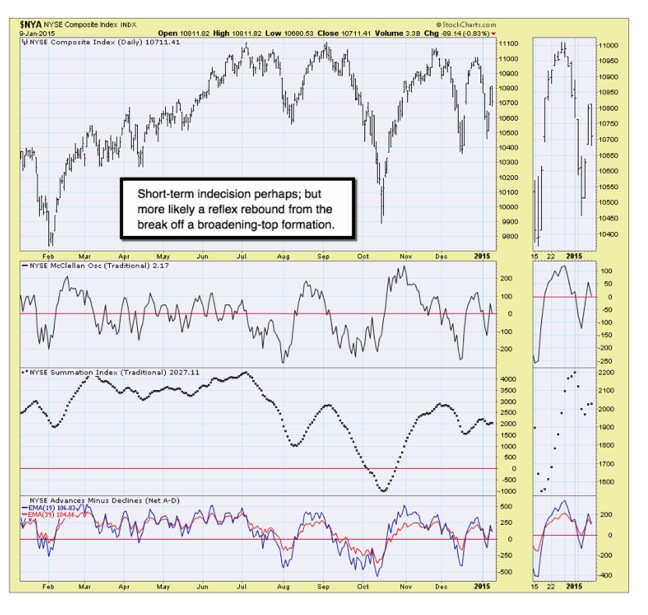 So it's in the middle of a range of the past week's low and high; and that's a reason we call it 'theoretically' an indecision pattern; with a downside bias. It is the overall interpretation of the retained E-mini / March S&P 2078 short on a position-posture basis, after harvesting a huge 66 downside handle gain.

Almost magically - the markets repeatedly have recovered lost ground on virtually each decline over the past year. This one we suspected was initial; ahead of January Effect buying, or more notably a snapping-back off crucial rising bottoms 'trend-lines' coincident with the turnaround's (and then more). 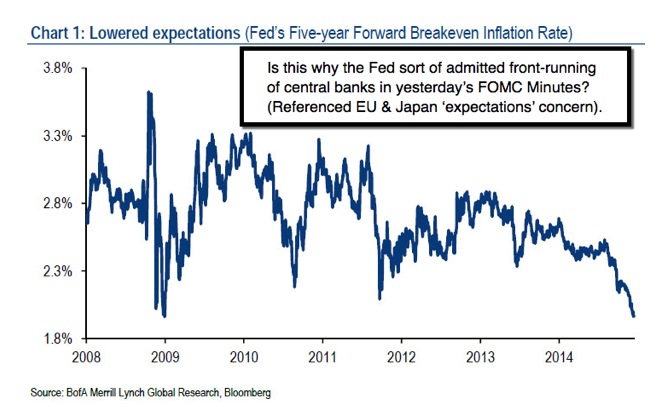 Over the past year, financial markets have steadily 'rebounded' their way to  higher levels, with seemingly each sell-off being magically lifted off support just before real "panic" set in. Is that causation or just a coincidence? In all cases it was knowledge that credit markets would remain somewhat stable, as the Fed wind was at the market's back. (Rest of topic for our members.)

Cognitive dissonance - preceded the market cratering. Now one has to be circumspect in contemplating not just the 'disconnect' between equity levels, and the real economic situations (domestically and globally); but understand 'why' there is more afoot than worrying about whether lower oil prices are 'bullish' in the longer term versus shorter-term financial dislocations.

These huge movements will trash the losers. Who is exposed?  Who will be feeling it most? The oil companies; the workers; the support industries; real estate prices in energy states? (Our view provided.) But few address the real risk which can impact markets, more than shorter-term tragedies, as do not offset benefits of low consumer energy prices. These are heavily leveraged financial structures; and derivatives. Who's heaviest in exposure:  (suspected institutions are listed for members). 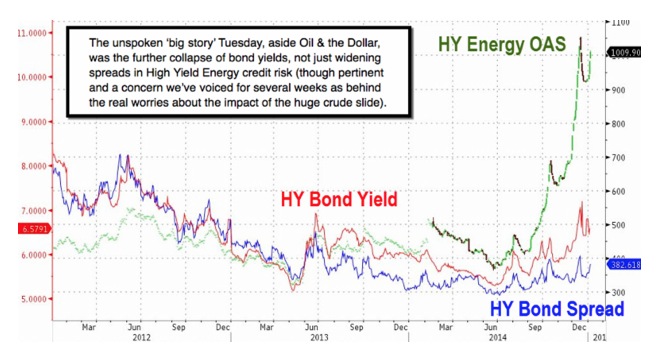 What may matter is viewing not what factors brought down oil prices; but rather to question: 'what does the oil price decline bring down' ?

Bottom-line: stock markets were (noted all December) on borrowed time. Then we had a post-FOMC year-end 'grind' that many 'wanted' to believe in; while it had no particular impetus to move it forward. Markets started to fade as suspected just as soon as sales would settle in 2015. I wouldn't be too enthused about prospects of thrilling rebounds with the snap-back over and a secondary test of the prior low (at minimum) now underway. Superb S&P / E-mini trading gains realized this past week; ideally more ahead.