Euro-panic or salvation - are perceived as 'on the table' for the new week. In reality, neither 'plate' will likely be the immediate outcome, but indigestion will likely be served both to players chomping at the upside or panicking with shake-outs. That was the case in the week just past; and the market -which afforded us enormous guideline gains in S&P trading- needed a bit of a rest, which it got (instead of a fade); thanks to the rising oil prices.

After the Swiss National Bank move (which may prove not so damaging as a few think over time), it is presumed the Swiss either 'know' a Draghi QE try is coming; or perhaps they were 'asked' to 'end the peg to the Euro', as the thought is out there that the ECB believed part of the previous excessive as well as unjustified Euro strength was because of Switzerland having to buy up so many Euro's. In any event; we nailed the top in the Euro over a year ago at 1.40 / Dollar; and the bottom process for the Dollar in the 79's too. 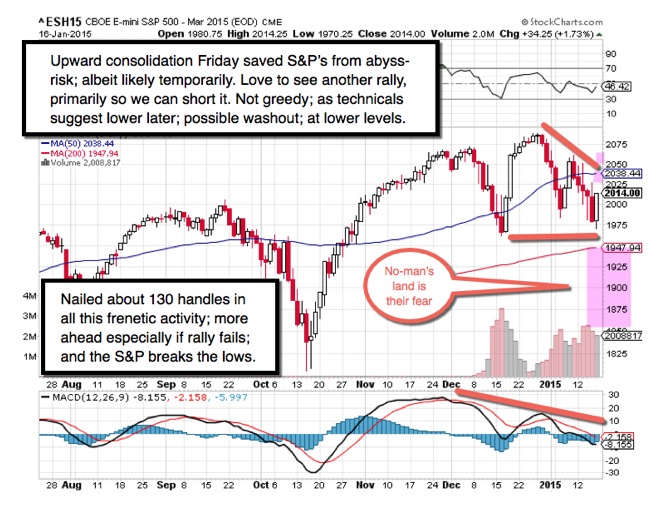 Friday did see us close-out the overnight Thursday March E-mini/S&P 2008 short-sale at the 1998 level; for a 10 handle gain complementing serious as well as numerous mostly successful guidelines over the past couple weeks, of which one was a 66 handle gain; and another a 50 handle gain, on single guideline efforts. (Friday low-probability efforts to short failed with breakeven results; as oil spiked, negating a sell-off on a false rumor of emergency Fed meetings, which came from a hacked New York Post Twitter account. If you wondered why Friday's erratic action; it surrounded that concurrence.)

Overall these two weeks have been phenomenal; resulting in gains over 100 handles easily; actually the net is probably closer to 130-140 handles total; (including adjusted for only a couple shots not working out), plus we caught a couple solid long-side rebounds too; typically then reversed back short.

To boost exports, Europe needed a weaker currency; as do the Chinese by the way. Yuan movements may be a sort of lurking background sleeper; but I'm not convinced (we'll explore this, the ECB, and China a bit more next).

Now; another reason we're concerned (we've shared basic ideas; only fair to join if you'd like the overall analysis and conclusion) and does not negate global economic conditions continuing to evolve. 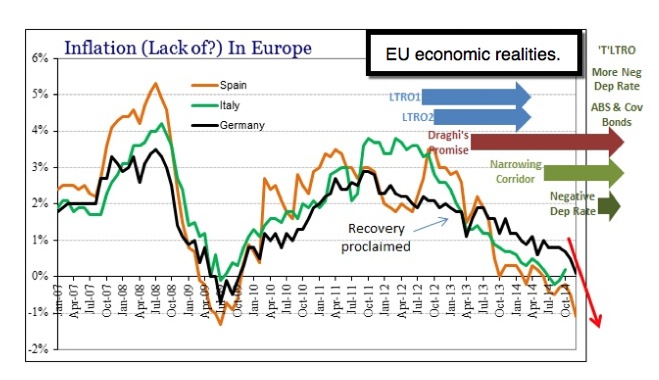 Bottom-line: all the discussions in markets since the SNB move, boil down to something I've projected for many months: competitive devaluations. Hard to say whether the 'Swiss peg to the Euro' artificially held-up the Euro; and it might be that the ECB actually 'wanted' Switzerland to disengage for awhile from the Peg, but let's call all all of this pat of the global 'revaluation' trend.

Competitive revaluations/devaluations have historically been characteristic of 'currency wars' (most don't like referring to it that way, because) it harkens to previous 'chaotic' periods, such as the 1930's.

For the moment, after superb (best ever start to a year) S&P gains solidly in excess of a 120 handles from the years start (guidelines mostly short; but a couple longs mixed in); we maintain just the position-posture March S&P / E-mini 2078 short-sale just now.

Daily briefing - there is some speculation about a developing commodity as well as energy low; and we seriously hope so; but don't see ample evidence as yet. But the downside got pretty crowded in all the weak sectors; and that is something we've warned could lead to some upward consolidation, if not a bit more due to (balance for members). That's why my idea was to have a market decline in January's 1st half, actually triggered from '2015 settlement dates', very late in 2014; then (the process evolves as outlined to members). 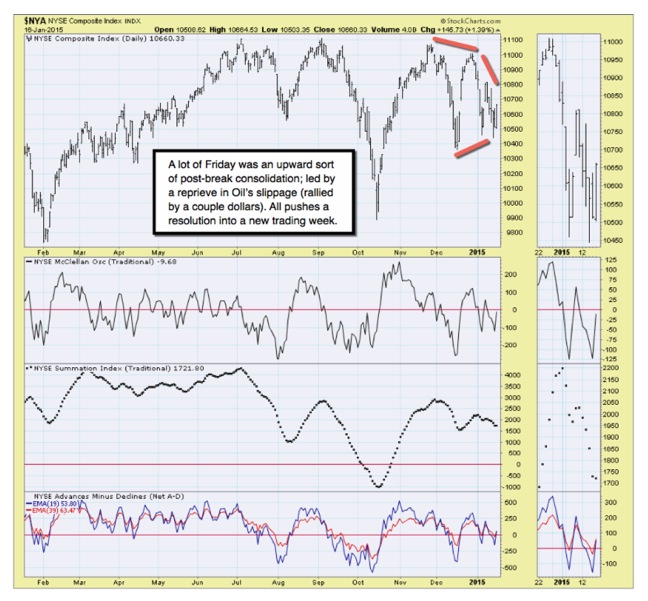 Preemptive (possibly) moves by the Swiss point toward fireworks next week and we intend fading extreme moves in either direction again. We can't say a prolonged zero-rate environment requires something to break; but believe it is (redacted). The 'macro' environment is more, not less, dangerous; and the bounce Friday changes nothing in that regard. It's not impossible that the ECB moves and the Euro (pattern response and our likely resulting action). 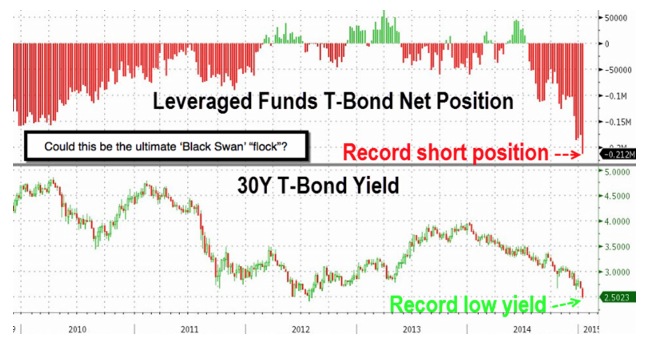 One thing many missed was St. Louis Fed-head Bullard implying the time to adjust interest rates is coming closer. Nobody seems to expect a rate hike in this environment; but Bullard is the same official that suggested the opposite (balance of discussion in the full report).

If you look at individual stocks; you see everything from Netflix, to Tesla, to Google, to Priceline .. all down 15-20% already. Yesterday I commented that even a Facebook (reserved) as far as AT&T (before today's news of course).

Over the weekend we maintain our 'position-posture' short-sale from March S&P / E-mini 2078, and no other active guideline for the moment; after what turned-out to be perhaps the most profitable two-weeks of trading the S&P at the start of a year, ever. Not 'ever' for other-than early January; but ever in terms of Christmas to MLK time-frames.

Currency wars front & center - triggered renewed chaos well before the NYSE opening. It worked out great for us; because the early decline (from a pre-opening up-down-chop reversal) set-up the opportunity to go long again . . . of course just to position for the next intraday short-sale.

(The vast majority of discussion -in fairness to subscribing members- must be redacted, as market dynamics remains very much in-play ahead too.)

Certainly the domestic 'low liquidity' we've addressed was also evident today as you could not have the rapid swings like we again saw without that.

Bottom-line: the market caught the majority of money managers and major analysts by surprise at the end of 2014 and start of 2015. It should not have as internal distribution has been ongoing for months.

Markets came unglued - as the S&P futures broke the 2000 level; and in the process decisively took-out the rising-bottoms pattern we've referred to since December as likely to be penetrated before some sort of substantive attempt to prevent a more dire outcome. 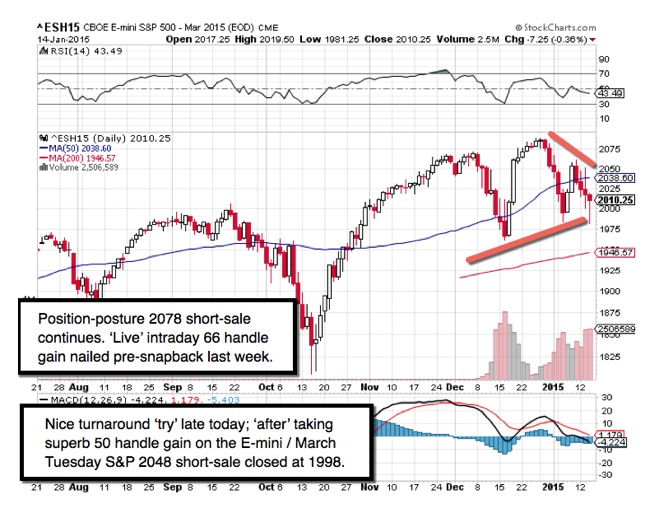 As you are aware of our perspective; including allowing for an attempt at a January Effect rebound at some point before serious renewed selling, probably taking its cue from oil; I need not belabor our views. It includes a belief that sooner or later the S&P (balance shared with members only). 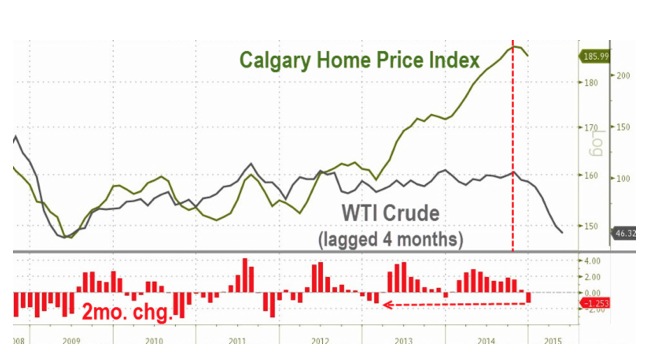 Conclusion: for some time I've referred to this as a 'Controlled Depression', not serious recovery (because that would require higher rates and actual assist to the private sector's animal spirits, as we suspect were intentionally suppressed); lest government has to try Debt Service from higher interest rate levels; which would be almost impossible given levels of total debt they saddled our citizenry with. (What this means and 2015 earnings next.)

Finally, al Qaeda emphatically (in their competition with ISIS) took claim for the brazen attacks in France. So much for the obnoxious rhetoric from Mr. Erdogan of Turkey, accusing Paris of staging it (typical Islamist type of 'let's blame the victim' propaganda.. Russian apologists are good at that too; so some think are certain people in Washington). (More.) We honor the French for their tough stance; sending the aircraft carrier Charles de Gaulle to assist the anti-IS coalition; and for morality exceeding most others now. 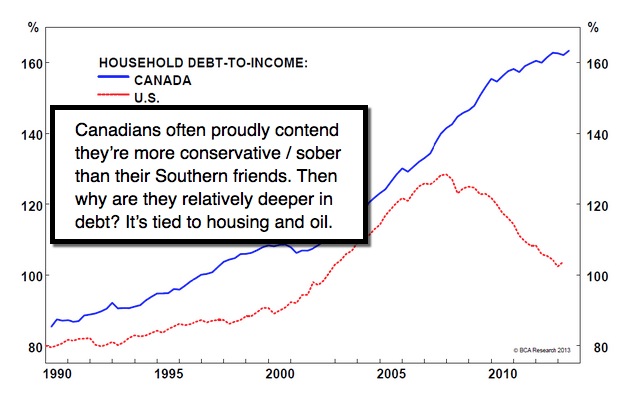 Having booked fantastic gains last week and this week; we're not being at all greedy; just trading. (More.)

'A race to the bottom' - just might be the one fundamental aspect omitted from every analytical debate about what is going on; or what's likely ahead. 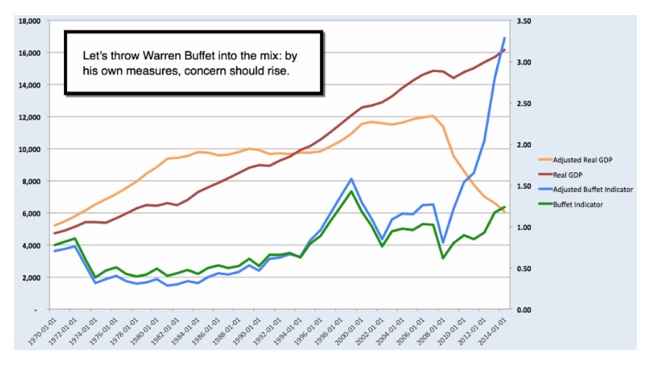 Bottom-line: stock markets were (noted all December) on borrowed time. Then we had a post-FOMC year-end 'grind' that many 'wanted' to believe in; while it had no particular impetus to move it forward. Markets started to fade as suspected just as soon as sales would settle in 2015. (Final note is related to handling likely chaos from EU/ECB this coming week).