'Old acquaintances be forgot' - may indeed be the theme song for a New Year just starting. In fact, most analysts already buried their logic that was  their dependency on the Federal Reserve 'money-printing' boost to levitate the markets, for much of the year just past. That's changed. So have global economics, and not necessarily just to the detriment of the West, as many of the pro-Gold, anti-Dollar (often pro Russian or Saudi) crowd perpetuate. 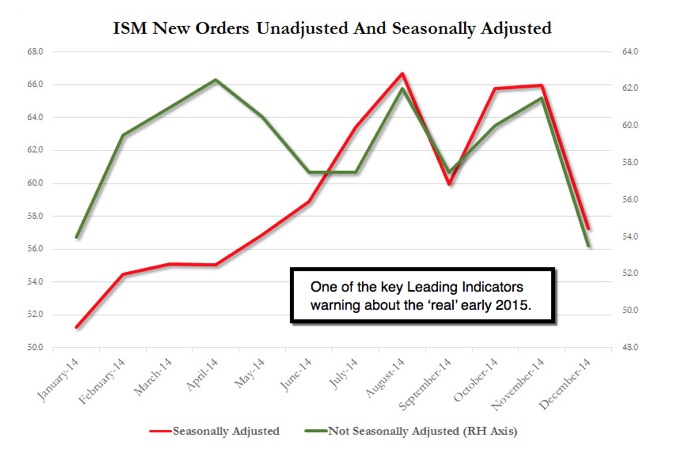 The reality: if they were acknowledging prior incredible sustained upside as dependent upon Fed stimulus; should they consider removal of stimulus like that (even if gradual) transitions forward dynamics? It does (in several uncommonly assumed ways; an evolution we discuss on a regular basis).

That 'pattern evolution' can include first full trading week events, start the year for most on 'long holiday'. It was excellent that we devoted time to the market New Year's Eve; as it was a belief that morning's rise would not be sustained, with a faltering given 2015 trade settlements already in-place. Thus we got our E-mini / March S&P 2078 short. 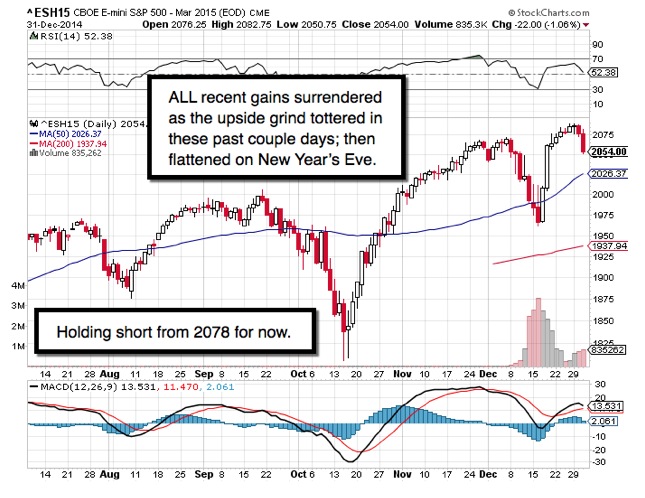 Our E-mini / March S&P short-sale guideline from 2078 carries a mental stop at (redacted) for now. The gain is in excess of 30 handles, quite huge; and I suspect truly aggressive traders protected all or part accordingly.

Daily action - on Friday attempted an early rebound which got nowhere; in line with our thinking about how they might try but fail with such an effort.

Credit markets say this (topic); VIX suggests this; and the convening of CES (Consumer Electronics Show) in Las Vegas actually will contribute to less of a boost than often occurs. Incidentally the market often rallies at the start of CES but then fades; this year there is more nervousness than usual. That's because the major electronics companies are running scared and confused.

I'll touch more on this next week; but just as a preview of what I suspect; the trend towards (discussion of technology business models for our members).

Big TV makers (including Samsung, LG & Sony, all initially ahead of Netflix and Apple TV with smart-apps) sort of look like they were intellectually and bereft of marketing savvy, in creating an over-reliance on display platforms versus solid proprietary relationships with media. Is it almost too late, given that 'device/set' margins alone are hardly impressive?

The paradigm for a New Year - begins with curiosity of how earnings grow to consensus estimate levels, amidst sluggish enthusiasm (etc). Regulators got thwarted with 'financial engineering' reform efforts. Question is, as ICE / CME announced reigning-in trading tactics we noted obfuscate order-depth realities; what will this actually herald? (Separate discussion.) 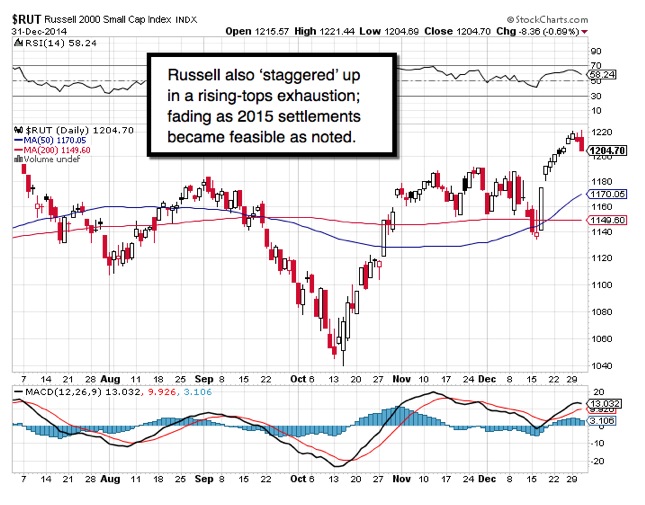 (Macro) action - the Dollar had it's best year in a decade; confounding all who challenged our (most significant) forecast of this unusual era; one in which even foreign central banks are said to have been playing S&P's. (At all dips to the 79-80 level we advocated bullish on the Dollar; now it's just a bit crowded; however view that all pauses were within an uptrend persists.)

All of this combines, along with the Oil price decline, to set-up structures so vastly at-odds with a majority of 'all is sanguine and will continue' forecasts. (Also blindsides pro-Gold, anti-US arguments of crowds peddling ideas of Russia & China colluding to harm the USA or set-up alternative currencies.)

Bottom-line: the stock market was (noted all Dec.) on borrowed time. Then we had a post-FOMC year-end 'grind' that many 'wanted' to believe in; while it had no particular impetus to move it forward. Markets started to fade as suspected just as soon as sales would settle in 2015. This may be interrupted by efforts to revive upside as (the new week's pattern evolves).

Wishing you a very Prosperous and Happy New Year!