The January 'barometer' - worked-out exactly as we projected; defying the historical rationale about years ending in 5; or post-midterm years. What for sure we mentioned others didn't, was that you 'never' had this many years of upward action, where the next year was also up. 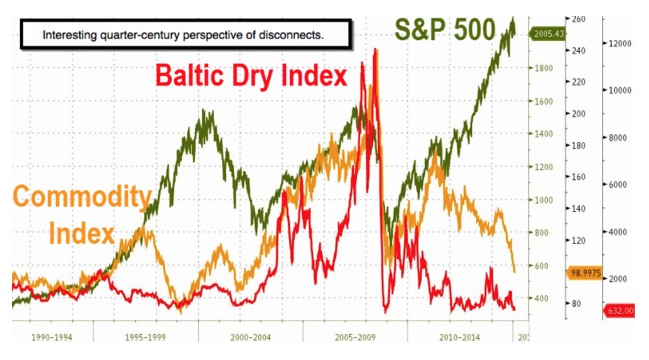 But we aren't dealing with a 'Farmer's Almanac', but rather monetary, fiscal, and economic environments that are extremely challenging. These do not warrant higher equity levels (with or without stimulus from central bankers). It's also a time when credit markets are diverging from what 'central banks' are 'saying'; which makes one ponder if market's are calling the Fed's bluff. 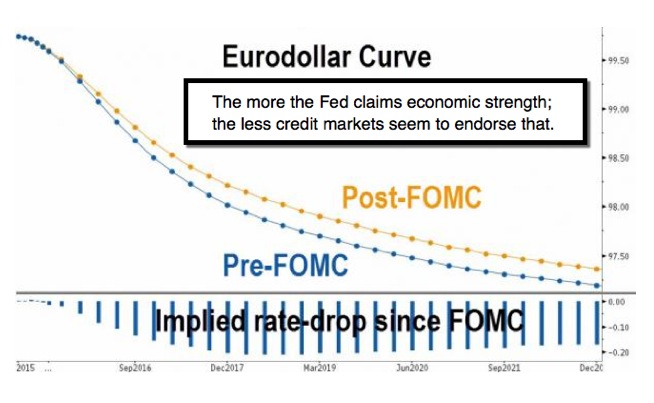 Too many 'analysts' are focusing on seasonals and cycles in contending the bullish outcome; and right about 'most frequent' occurrences; but omit clear 'exceptions', and when they occur (such as after such a strong move on Fed sustenance, which is gradually being withdrawn from the underpinnings of the markets), in manners that matter way more than 'typical' seasonality. 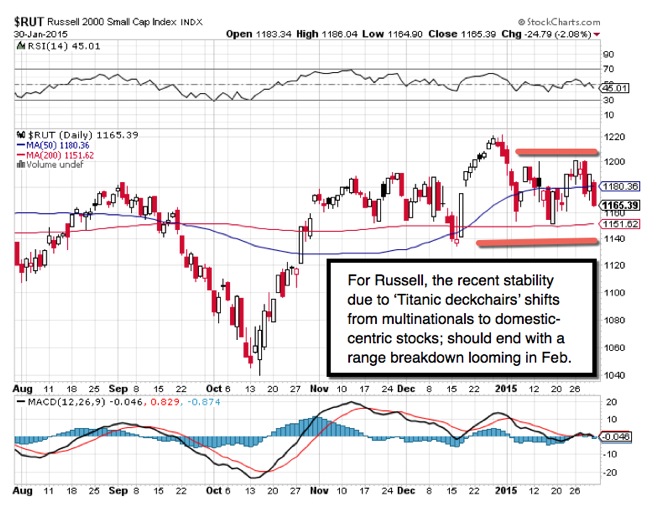 In our view the Dollar strength has been persistent for over a year now; and we see no reason to chase it; increasingly seeing anticipated ramifications. It is reflecting central banks increasingly defensive independent 'every banker for himself' approach; that I've warned of for a couple months. It is all part of the 'competitive devaluations', (balance including China remark; reserved). 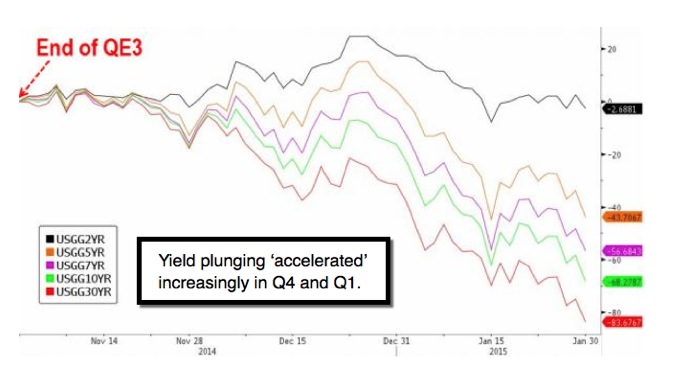 This has actually been one of the most profitable trading January year-starts 'ever' for us, in terms of net cumulative S&P points gained during a month; in fact whether a bullish or bearish month. We were adamant about January's prospects for a decline beginning actually in December's waning days, while you could sell and 'settle' in the new 2015 tax year. Said that the initial large projected decline (March S&P 2078 short we did) would be merely the initial shot to the downside; followed by a rebound (or a couple) then more decline. 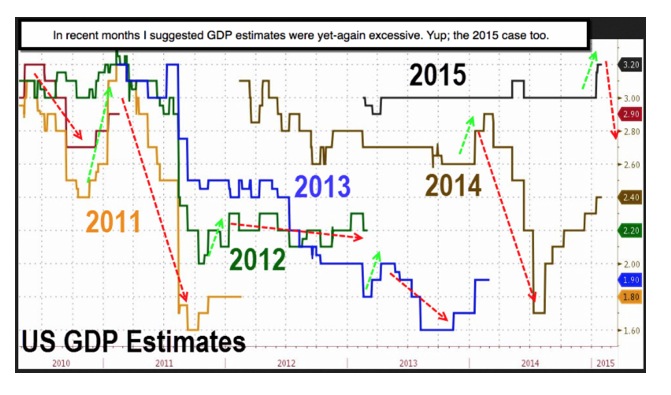 Starting with our huge short in E-mini / March S&P from 2078; which yielded a 66 handle gain; then a rebound; then a 50 handle gain; a 30 handle gain; and a few gains of 5-10 handles; which are solid in their own right (sprinkled with tiny losses as we only shorted spikes; but oh once in awhile they take it higher) we understand the volatility and illiquidity; and thus were flexible just enough to net tremendous trading gains with very little giveback.

(Remarks and charts about a country newly at-risk of default is redacted in fairness to our subscribing members; we invite you to join this exciting time.)
The overall call was for a structure featuring a tax-based initial decline; then rebound as seasonal funds flowed in; followed by a 'real decline' (got that); then rebound as they 'fought' a 'Battle Royale' to hold January lows, then a new fade as month-end came upon us. 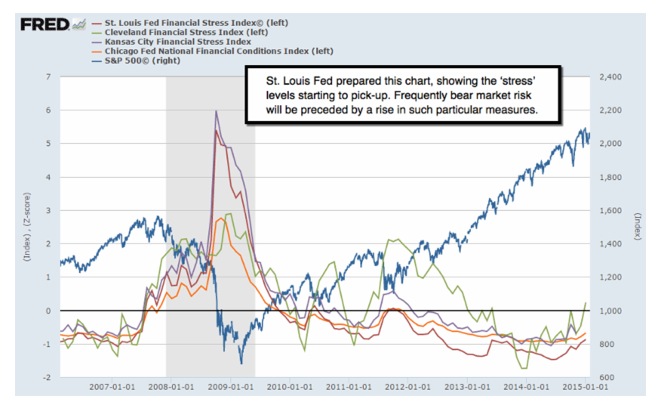 Now the irony is that we've accumulated these hard-fought-for, anticipated fully in-advance as far as patterns and trading gains. Such achievements take energy and perseverance, which is what we've focused upon in the past six weeks (a failing grinding rally preceding late December's turn was part). 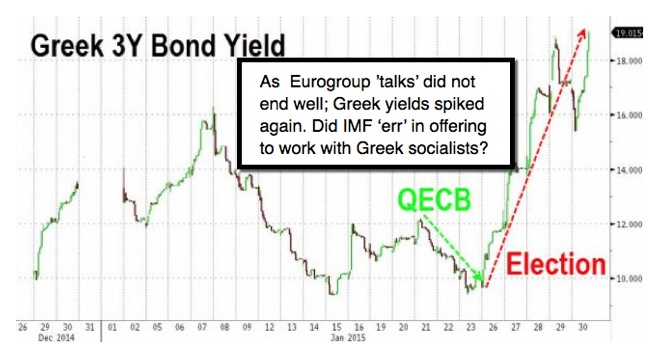 There has been no bullish argument of merit; there is everything noted that's unfolding; and aside the old saying 'as goes January goes the year', while it is of less significance to traders (look what we've done without the primary or major trend even breaking . . . yet ), it sure matters to investors. Constant talk about how strong the 2nd half of the year will be, but they don't know so and don't even have the energy argument (correct, as we envision it follows). 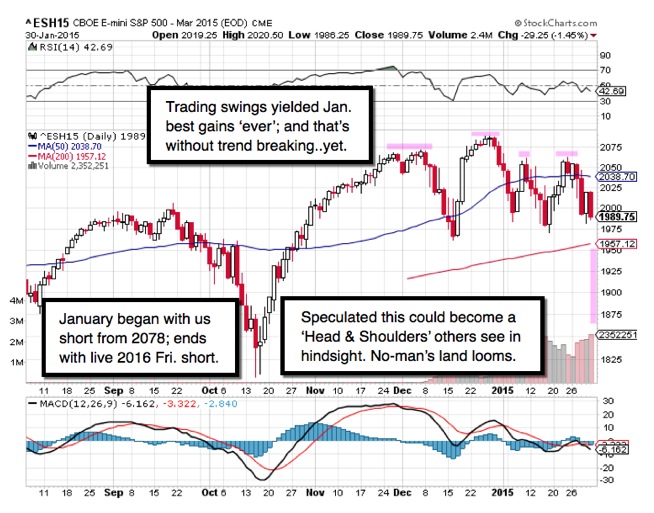 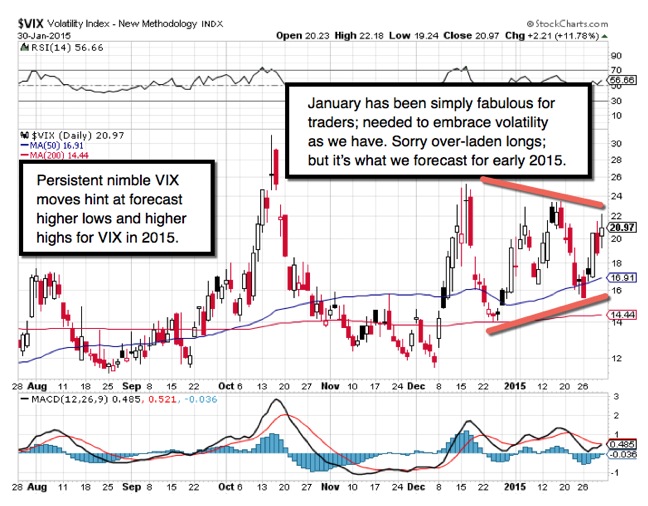 Daily action -  reflected a lack of investor conviction, low liquidity; along with seriously volatile conditions throughout the month of January. On Friday it began with miserable GDP data; reflections on our view (broader realization by traders) that a drop in energy gave the Fed 'cover' for light hawkishness. 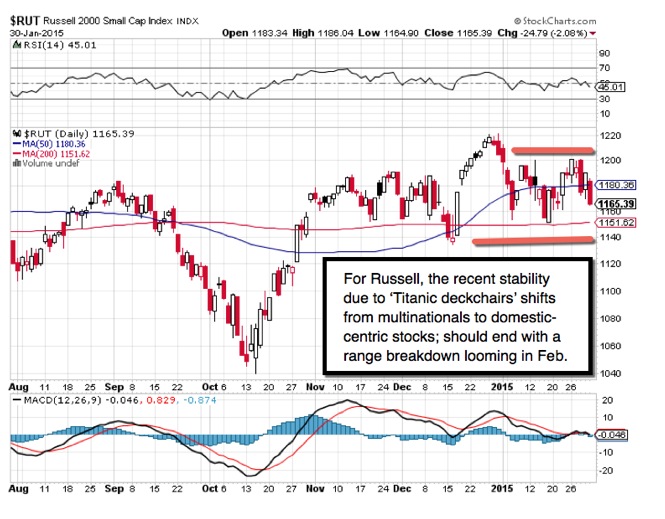 When the dust settled, activity was just as preferred into the weekend; down with a great degree of anxiety as to how February starts. On Saturday ECB issued an ultimatum to Greece (noted in the video) and that's sobering too. (At the same time, the new Greek Finance Minister makes sense with a BBC slightly-hostile interviewer, when nothing you can't just constantly build debt.) 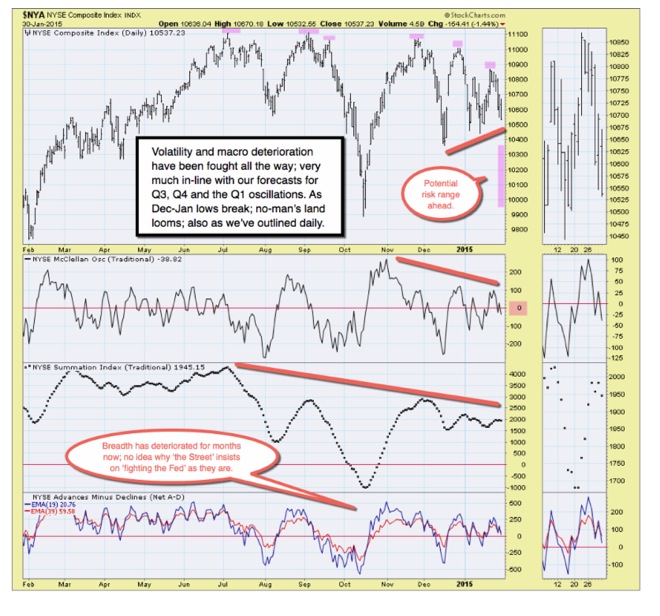 Ahead of Monday we're short E-mini / March S&P 'live' guideline (a weekend holdover) from 2016; and it's already a theoretical gain of about 25 handles (25 full S&P points); which is amazing for the projected Friday late day fade.
(Nasdaq chart and remarks redacted; though we gather you know our 'call'.)

Shuddering then surrendering - as outlined for Fed day and beyond; how the market performed, and broadly at that.  (Discussion ties this all together.) 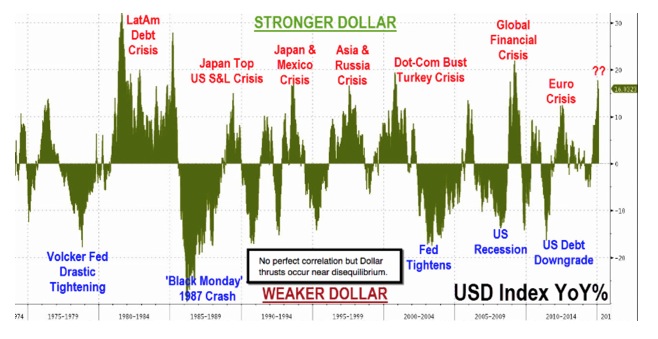 Bottom-line: the important takeaway is that we fought for this topping sort of process; fairly confident that it would break to the downside. Note that it 'may' affirm construction of a 'right shoulder' ('head & shoulders' top, if it continues breaking as seems likely).

Earnings complacency - was a key point I made last week; as investors as well as traders were excessively focused on the ECB's QE plans, and Greek Elections (both important for sure); while overlooking what we called dubious earnings prospects from American companies which talk recovery, but often had 'lowered' their initial 2015 estimates. 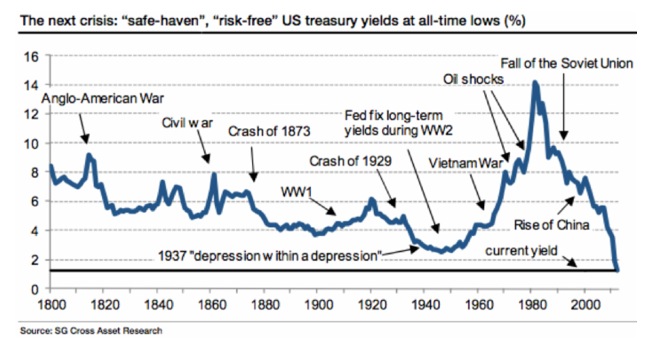 (The potential ultimate danger of this rate structure is hard to overstate.)

I've contended excessive QE and staying at 'emergency' low rates for years, has a damaging effect; drains capital from the private sector so thus inhibits recovery. It's why I argue economic recovery, to extents it exists, occurs for the most part in-spite of the Fed's 'prior' QE, not because of it.

(Apple for sure is an extreme exceptional winner contrasted to multinational big-cap stocks in general; and one that might be sold-into short-term after it pops. So we don't view it as a buy but a long-term hold ever since shorting it 700 (original buy was back in the stock-picking days, around 12 believe it or not); buying on the break of 400. It's one of a few stocks we do follow closely so from that split-adjusted 57 level consider it a hold, not a buy on strength.) 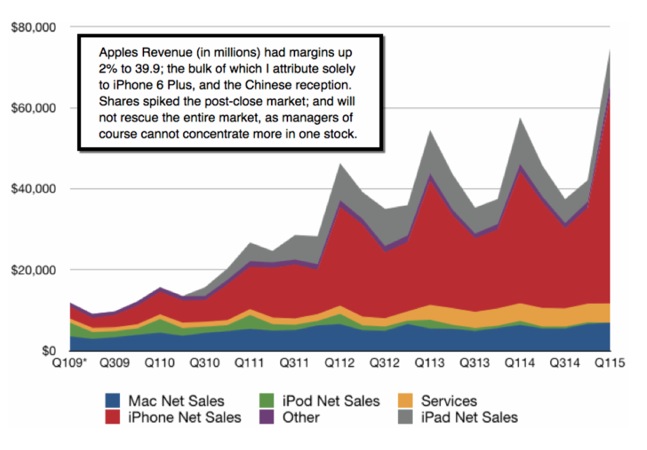 If there's a 'back-channel' hint at why the Fed is not in-position to burden the American people with more stimulus-based debt, it might have come from a little noticed official source today. The Congressional Budget Office.

In testimony before the House Budget Committee, CBO Director Douglas Elmdorf testified that: debt will exceed 100% of GDP within 25 years and continue to rise, a "trend that could not be sustained"; eventually heighten "the risk of a fiscal crisis". We don't think risk is 25 years away.

As to 'now'; the Caterpillar report said it all, though analysts will blame it just on oil industry. Reality is Dollar strength impacts a lot of the companies; from Proctor & Gamble (biggest currency impact ever according to their CEO); to United Technologies, to Pfizer, DuPont or others. Here's the point: of the 18 S&P components that offered guidance, none have met or exceeded that guidance. As bad as forewarned. 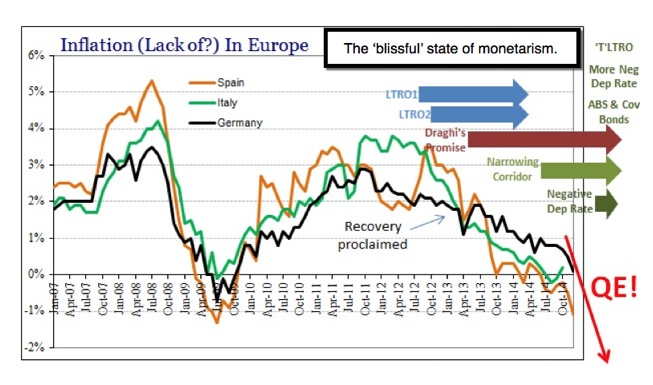 The evolution of this pattern matters, as there is a certain 'dynamic' or 'flow', which we've outlined. That included the rebound expectations; and it would follow that between now and early February the market would exhaust most recent snap-backs, as part of this is technical, not just monetary, and dates from the fairly recent efforts of the January low to hold the December low. It should be reiterated that (what awaits next is discussed with our members).

While the glass-half-full crowd argues January is a secondary test of the low in December (and it is just momentarily); we believe (reserved for members). Is it desperation; a fear of what's coming? Is the Street is actually 'fighting the Fed' ? (Expanded remarks.) 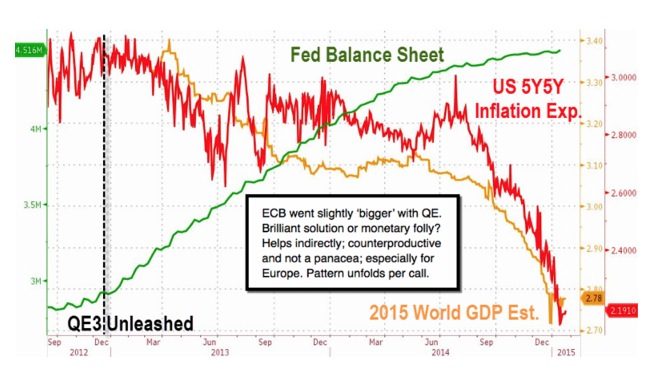 Bottom-line: stock markets were on borrowed time. We had a year-end 'grind' many 'wanted' to believe in; with no particular impetus to move it forward. Markets started to fade, with alternating declines and rebounds as the process was suspected to evolve; and a late January expected fade.

In the wake of the 'best January trading gains I can ever recall in-total; we're short now from March S&P / E-mini 2016 ; post 'red-alert' Tuesday and early Wednesday 'crash-alert' (how we mean it detailed for our subscribers). Fear of 'the line' breaking; hence bulls' desperation).