Stagnant economic recovery - (or even retreat) continues characterizing America's economy; while analysts and even the FOMC, acknowledge this (how can they not); while not delving into the cause. To understand how to solve it (or at least not worsen the situation); the need to come-to-grips with the reality disconnect remains paramount. (This totally relates to the market's current technical picture; and why Bears are winning the S&P 2100 battle. It is also the reason we continue our E-mini / June S&P short-sale guideline with a focus on selling rallies, rather than buying dips. I should add that on Wed and Thurs we scalped morning dips, made long-side gains; then reversed short.) 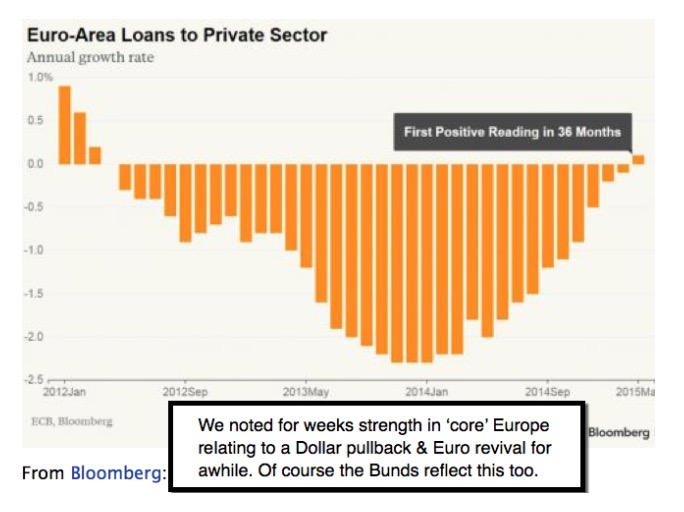 The FOMC, in it's infinite lack of wisdom, continued pouring fuel on a process which was having minimal impact, or actually widening society's disconnect. If they intended that, it might be because of the small 'working' percentage that supports so much of the rest of society in one form or another. (Note the slow decline rather than ascent of household net worth in the 35-55 age bracket; a time which should be associated with the average citizen's most productive time.) Instead, the lower incomes are stagnant (really for a Quarter Century), while the middle has eroded, and the older wealthy class prospered.

If economists just looked at destruction of middle class jobs over a generation (masked by easy credit a decade ago, and by the way we said so then, when contrasting rising housing into a bubble, without commensurate improvement in household incomes).. if they looked at their own raw data, they'd realize they overstayed stimulus (and debt encumbered) past the 'emergency' during the 'Epic Debacle'. This now comes to a head in-line with our pattern calls.

In sum: despite Central Bank's (that's the Fed or some foreign central banks as well) best efforts to stoke economic growth by pushing asset prices higher, the effect is mitigated when only a small percentage of the population actually benefit from rising asset prices. This disconnect has deep overtones. 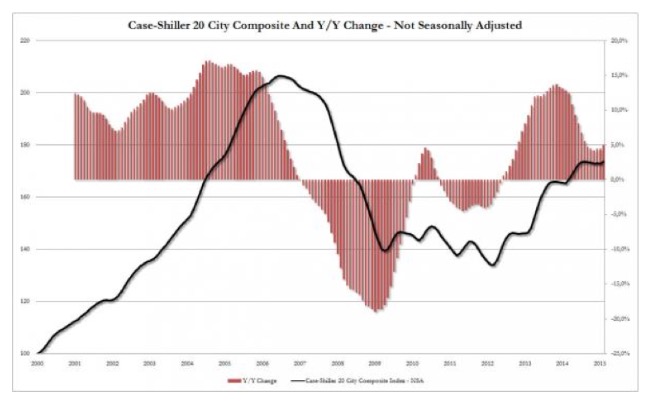 In an economy that is said to be 70% based on consumption, when the vast majority of American's continue living paycheck-to-paycheck, the aggregate end demand is insufficient to push economic growth higher. To wit: today's very anemic .2% GDP Q1 gain. If not for the huge 'inventory build; it would in fact have been about a -2.5% LOSS of GDP; most analysts won't admit that.

While monetary policies increased wealth for those that already have wealth (which is fine if it had been balanced with aid to the private sector as well as infrastructure rebuilding, which is sorely needed in this Country), the Fed has been misguided in believing that the "trickle down" effect would succeed in a way that stimulates the entire economy. It hasn't; and sadly we've known this to be the case for some time. Why has the Fed not come to grips with these huge dislocations, which are counterproductive to the Nation's social fabric? (I wrote this before today's WSJ Editorial said much of the same, why did it take years to realize the impediment to growth QE policies promulgated?)

This is not a call for more stimulus or any socialistic policies; just the opposite in fact: it's a call for intelligent trade policies; a turn-back from enforcing such ideas of 'globalism' as some sort of salvation; stopping compelling colleges to include courses that indirectly advocate subordinating American interests to distant trading groups who do not play even on a level playing field (many of those subsidize industry directly or indirectly, which makes it impossible for an eager American competitor, even if you eliminated the wage differential); and without imposing capital controls or price fixing; at least stop being the fool at almost every trade conference that erodes American primacy in many areas. 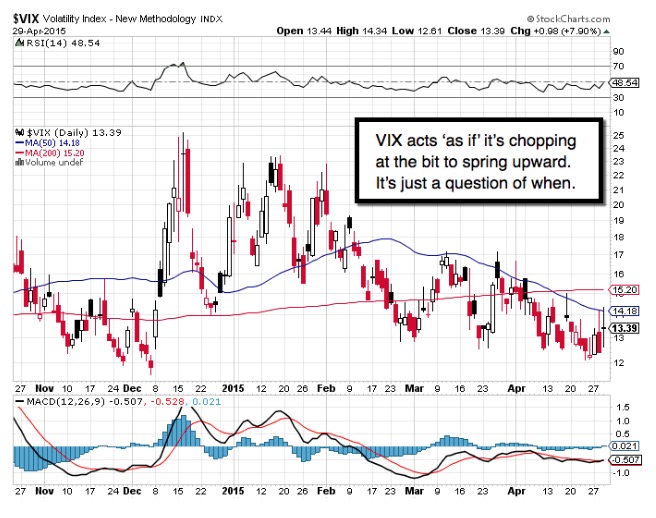 Market meaning? Long-term disastrous; and has been masked for years. The worst case? (Redacted.) And as I've said for years; politicians in this case are manipulated by the U.S. Chamber of Commerce, which has the overtone of representing big multinational business, not the private sector.

So here we are, with China and others holding most of our paper; with debt in the stratosphere; with the social versus financial asset disconnect thriving; the last thing a 'live the American dream' reality would advocate; and politicians in most cases burying their heads in the sand about it (or flat-out lying about job growth in the aggregate where it counts), while the Fed finally figured it out by now; but doesn't know how to get out of the 'trap' they build without triggering, and being blamed for, the (potentially coming) 'crash'. 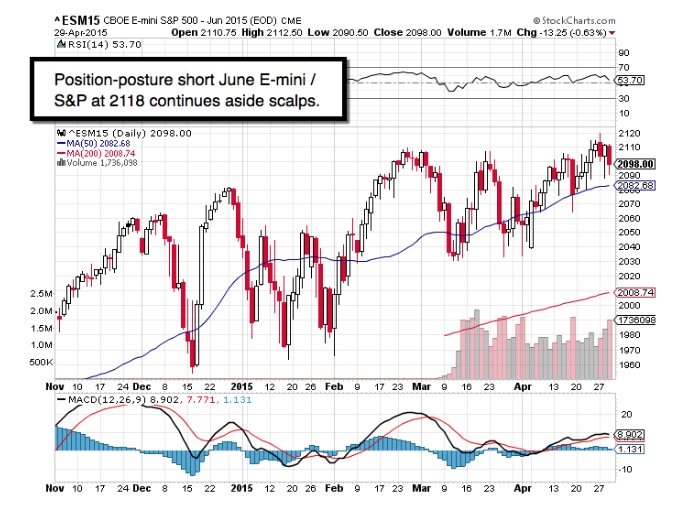 Daily action - was reticent to do much of anything (for most players) intraday Wednesday; but we did give short-sale guidelines on the spikes; and broadly markets did fade from them; but kept recovering every time until near the end. 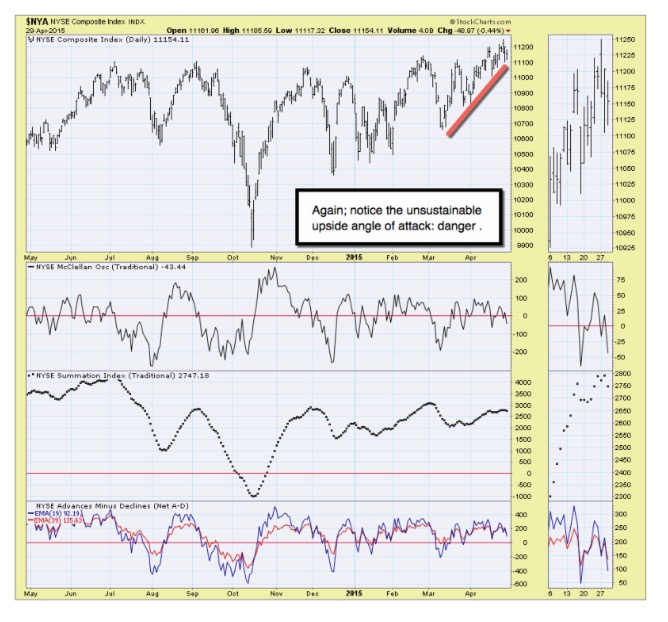 At day's end we again observed the incredibly high problems in bond areas; a concern that doesn't automatically mean money shifts from credit to equity or ETF sectors. You'll have more not less volatility; and the idea of 'control' by an assertive Fed or anything else preventing market volatility from returning, well one better hope that's wrong (not just because we'd due to decline, but for the sake of the world's most established market being perceived 'as' a market).

Overnight, retaining skin-in-the-game on the bearish side from the E-mini / June S&P 2118 level, while scalpers are flat S&P (looking for down-up-down in general Thursday).

(Update: on Thursday we bought the initial drop; made about 8 handles in the rebound; then moved back to the short side for scalpers; per a live video link I've shared as a rare current sample. This is a dangerous market time; and is a great time to become a regular daily member in all candor.)

Prior highlights follow:   (vitually all redacted in fairness to members).

'An absence of bids' - allowing the market to fall of its own weight, without a particular wave of selling, was our call prior to the FOMC meeting session. As we noted on the weekend report, we crossed our fingers for an early rally, as we had no bearish position at all coming into this trading week.

I was almost ecstatic that we got a double-pump to the upside, as amidst all the clarion calls for 'nowhere else to put money but equities', we quietly noted that even Goldman Sachs issued a note of caution about buybacks (more). 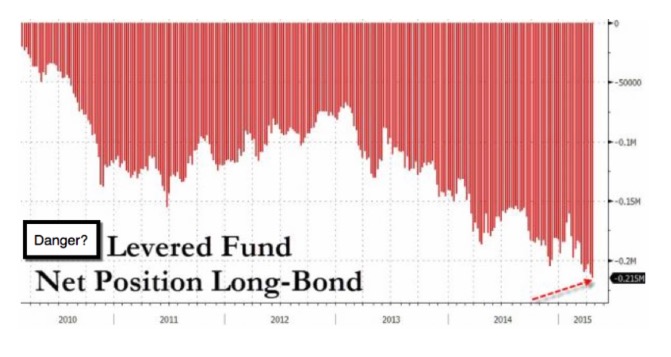 Volatility can be suppressed - but only for so long, in a capitalist system. It's a lesson we've all learned from the incredible stamina of the overall market; a tribute to 'financial engineering', Quantitative Easing, or whatever rationale is used by the financial press to explain the utter endurance of the upside saga. 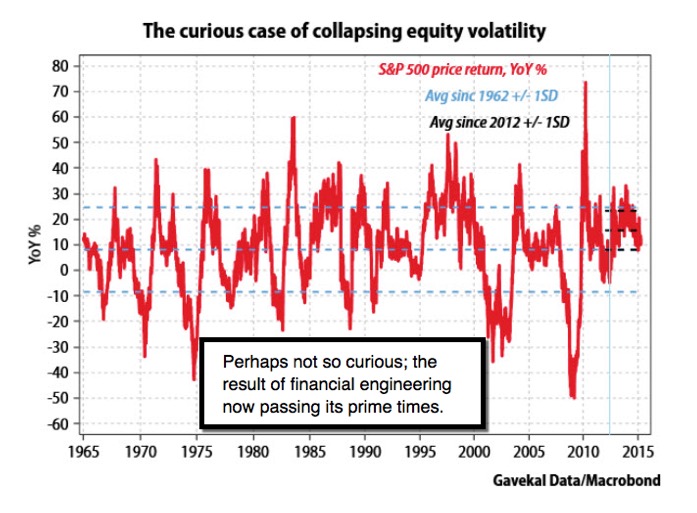 The Put/Call ratio of open interest on S&P 100 (OEX) options has historically been a "smart money" indicator. The stock market peaked, and essentially drifted sideways for the last 6-7 weeks, since March saw an unprecedented string of bearish readings. The bearish OEX Put/Call readings hasn't relented, however. Note: bearishness accelerated to extreme levels never seen before. 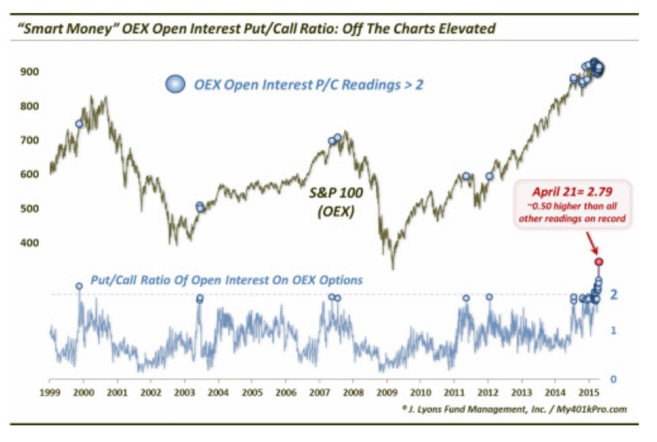 Bottom-line: stock markets recovered 'some' borrowed time; allowing last week's overall short-sale from June S&P / E-mini 2118 (nailed that); and as the days evolved, for intraday scalps we've had longs & shorts against that context; because there is (for now) a bit of 'trading' cushion above March lows for range trading. However our bias is for a more serious market break.

Treacherous process evolves; we'll guide through it as best able..