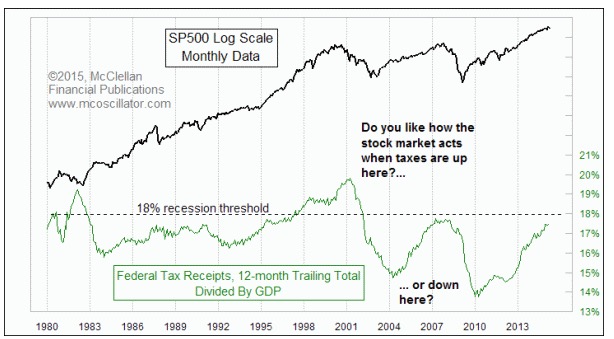 The April 15 income tax filing deadline came this week, and so taxes are on the minds of a lot of Americans.  As Arthur Laffer noted 3 decades ago, it reaally is possible to set tax rates too high such that it actually hurts the economy.  We appear to be in such a condition now.

I wrote about this topic back in January, when lawmakers were contemplating raising the tax on gasoline.  But it is worth revisiting as we see total federal receipts creeping up toward 18% of GDP.  Whenever total federal tax receipts have exceeded 18% of GDP, the result has always been a recession for the U.S. economy.  And sometimes we can see that effect from a total federal take at less than 18%.

The current number is 17.5%, based on total federal receipts for the 12 months from April 2014 through March 2015, and based on projected GDP for Q1 of 2015.  That is very close to the 17.7% reading we saw in 2007, just before the financial market collapse.  It is still some distance away from the all-time high reading of 19.8% seen in early 2001, and because of that some economists argue that we can safely go back to those higher levels and have the same strong economy that we saw in the late 1990s.

There are two problems with that hypothesis.  The first is that economy of the late 1990s was not as strong as the revisionist historians would like us to believe.  The high taxation then pretty effectively killed the technology boom.  Total stock listings on the Nasdaq actually peaked in late 1996, and were in a genuine free-fall long before the bubble peak of the Nasdaq Composite Index in 2000.  That peak came about because a few large tech stocks were hogging up all of the available liquidity, and crowding out the smaller players, sort of like the biggest hippos taking up the last remaining water hole on the Serengeti during a drought.  Unemployment rates also bottomed out in early 2000 and then started upward.

The second problem with that hypothesis is that we don’t have the same demographic conditions now.  In 1999, the members of the Baby Boom generation (born 1946 to 1964) were between 35 and 53 years old, in the peak of their entrepreneurial years.  They were working hard, building companies, and pushing the economy faster than it would normally go.  Now, they are 51 to 69 years old, and are more interested in playing with their grandchildren than in starting a new company and hiring people.

The children of the Baby Boom generation make up what is known as the “Echo Boom”, which peaked in the birth year of 1990.  Those 1990 babies are now just 24 to 25 years old, and many are just now moving out from their parents’ homes.  So they are not quite at their peak of hard work and entrepreneurialism, and even when they do reach that point, their numbers are just a shadow of their parents’ generation.  So the Echo Boomers cannot absorb the same degree of a repressive tax burden that the Baby Boom generation could.

This 18% recession phenomenon is not new.  It has worked going all the way back to World War II.  Here is the same comparison for the years 1944 to 1980: 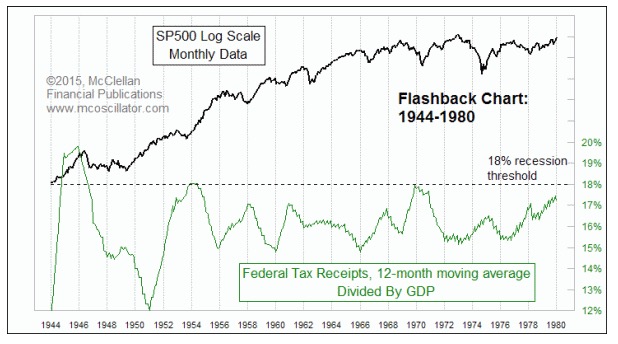 Federal receipts got all the way up to 19.8% of GDP in late 1945, as Congress was trying to pay for WWII and pay off all of those war bonds.  And in case anyone fondly remembers the strong war-time economy then, we should remember that an economy which requires price-fixing and rationing is not a strong economy.  When people cannot find a place to live because of lumber shortages, and have to grow “Victory Gardens” to have produce, that is not a strong economy.  The effects of that taxation repression finally showed up in stock prices during the late 1940s, and only when taxes dropped back down to a less onerous level did the stock market finally start to rebound again.

Meanwhile, federal government spending for the latest 12 months equals 20.4% of GDP, almost 3 percentage points higher than receipts.  I keep hoping that someday we will get some leaders who realize that in order to pay off $18 trillion of debt, we have to get the spending number underneath the receipts number, and leave it there for a long time.

And we need to keep the federal receipts number well below 18% if we are to avoid the next recession, and its associated downturn in stock prices.  We may already be too late in that regard.