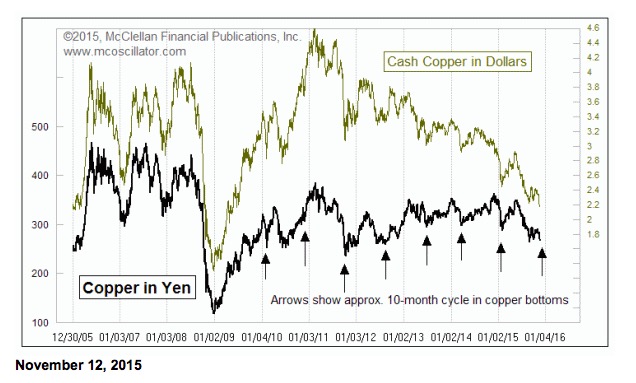 A subscriber wrote this week with a great question: Does the long downtrend in copper prices portend a big collapse in China?

The truth is that copper prices as measured in dollars have been in a downtrend since the top in early 2011, so almost 5 years now.  The old belief in “Doctor Copper” being a reliable indicator of the future economy seems to have been abandoned a few years ago, since copper prices have continued lower but GDP has not turned down (yet).  If copper was really telling us the true story, then we should have long ago been in a big honkin’ recession.

But looking at copper prices measured in dollars is only one viewpoint.  The chart this week shows copper prices as measured in terms of Japanese yen.  From that vantage point, copper prices have been chopping sideways since late 2009.  It is not the downtrend that we see in the dollar price of copper.

So what does that mean about copper getting cheaper, and possibly signaling a recession?  The price of copper measured in yen reveals that copper is only getting cheaper because of the appreciation of the dollar.  Take that away, and copper is not in a downtrend, but rather is just chopping sideways.

Also featured in this week’s chart is a fascinating pattern of bottoms in copper prices that shows up about every 9 to 10 months.  Don’t ask me why that period is important.  It would make more sense if there were an annual seasonal pattern in copper prices like there is for the stock market.  But the financial markets are not required to make sense.

There used to be a reliable pattern of 9-month lows in the stock market, which is an interesting coincidence in terms of the length of the period between bottoms.  But that pattern stopped working several years ago.  In spite of that disruption, that period still appears to be working for copper prices.  It shut down during the 2008-09 financial crisis, but has been working well since then.  It says we should expect a bottom for copper prices right about now, or at least before the end of the year.

So does that mean a real bottom for copper prices, or a top for the dollar?  That is the interesting question, and I do not have an answer.

What I do know, however, is that downtrends in copper prices typically end with a climactic washout selloff.  This point is illustrated in this next chart, which shows the washouts with a 10-day rate of change (ROC) indicator: 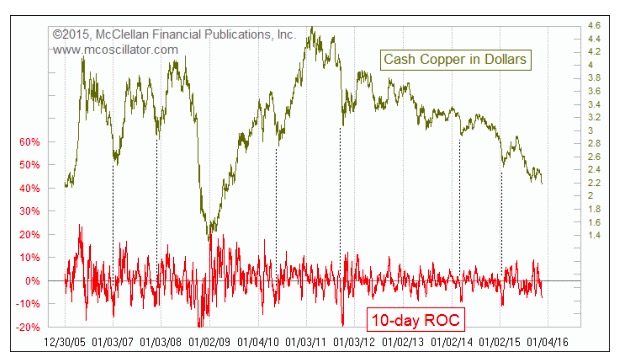 The 10 month cycle in copper price bottoms says that a bottom is due imminently.  But we are not yet seeing a big negative reading on the ROC to say that we have seen a washout selloff.  When that washout eventually comes, there will likely be some big geopolitical or economic news to justify the selloff, and to help facilitate the washout selling wave.  So when you hear that the sky is falling in the copper market, that will be the signal that the bottom is almost at hand.