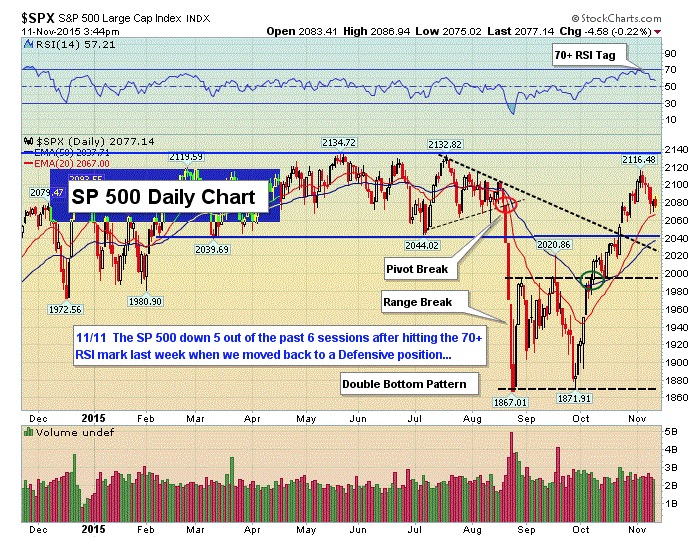 It's really that simple. The market is doing its best to get the daily oscillators on the index charts to move lower so as to set up a better buying opportunity from lower levels. One last opportunity in my opinion but why worry about that now. The market after hitting 70+ RSI last week where we booked gains in most of our plays starting to unwind in a fashion that would allow for another move higher once the stochastic's and Macd have moved low enough. Nothing impulsive as the market sells which is key to understanding what type of selling is taking place. Whether it's truly bearish selling or the type of selling that will allow for the markets to try higher once again in time. So far the bulls have to like the process but it shouldn't be over quite yet as MACD's are still crossing down from elevated levels this week. While we can still rally some the process of moving lower should still have some decent energy left. With support at 2058 to 2052 once we give up the 20 day exponential moving average at 2062 there is room to go lower. I am hoping and thinking we can break even a bit lower than 2052. If we can do that then the stochastic's should be at oversold with the Macd heading back towards the zero line. That would likely be enough to get the selling to cease for a while. How high the final move up takes us is unclear but I am hoping and thinking a new high is reasonable. So in the end the day was a success in terms of price versus oscillators as the oscillators continued to unwind nicely without too much price erosion. A day at a time as we await the markets signal to go back long meaning a gap down hopefully with a strong hollow candle. There are other candle sticks that are acceptable as well but that one is my favorite. We shall see what the market offers up in time in terms of bottoming out as we're holding 100% cash off our 70 RSI tag. 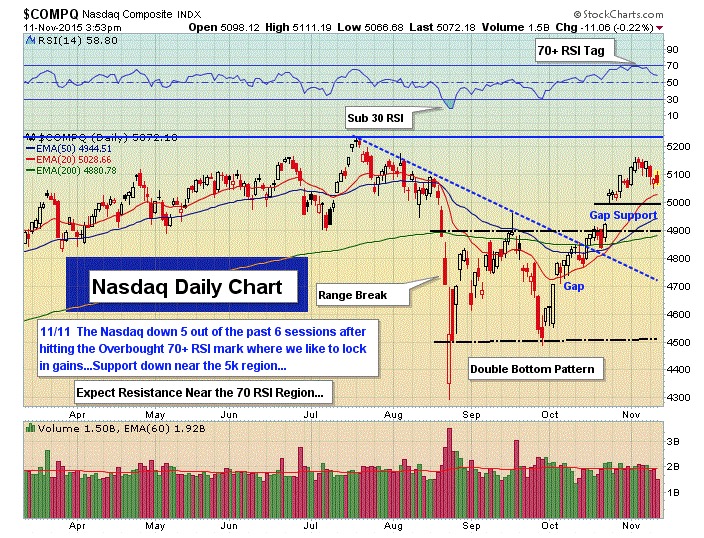 The bull bear spread is at the 16% level of bulls to bears. Anything over 30 is a red flag that we're getting a bit too happy or frothy if you will. We spent nearly two years, save for two weeks, over 30% with numerous readings over 40%. The recent selling took us down to -10%. Now with the rally we're back up to 16% after being as high as nearly 19% last week. I do not believe we'll get back to 30% for probably the next two years. If the bear market hits as I expect thanks to massive negative divergences on the monthly index charts, I believe we could see the bull bear spread at -40% at the lows in the market. If ewe do get one last new high in the market we could see the low or even mid 20's again but I do not believe we'll see 30% again until at least 2018. I'm really sticking my neck out here and setting myself up to look bad but that's what I believe so why not share. The days of massive froth should be over for a couple of years. Still hoping for that one last new high. 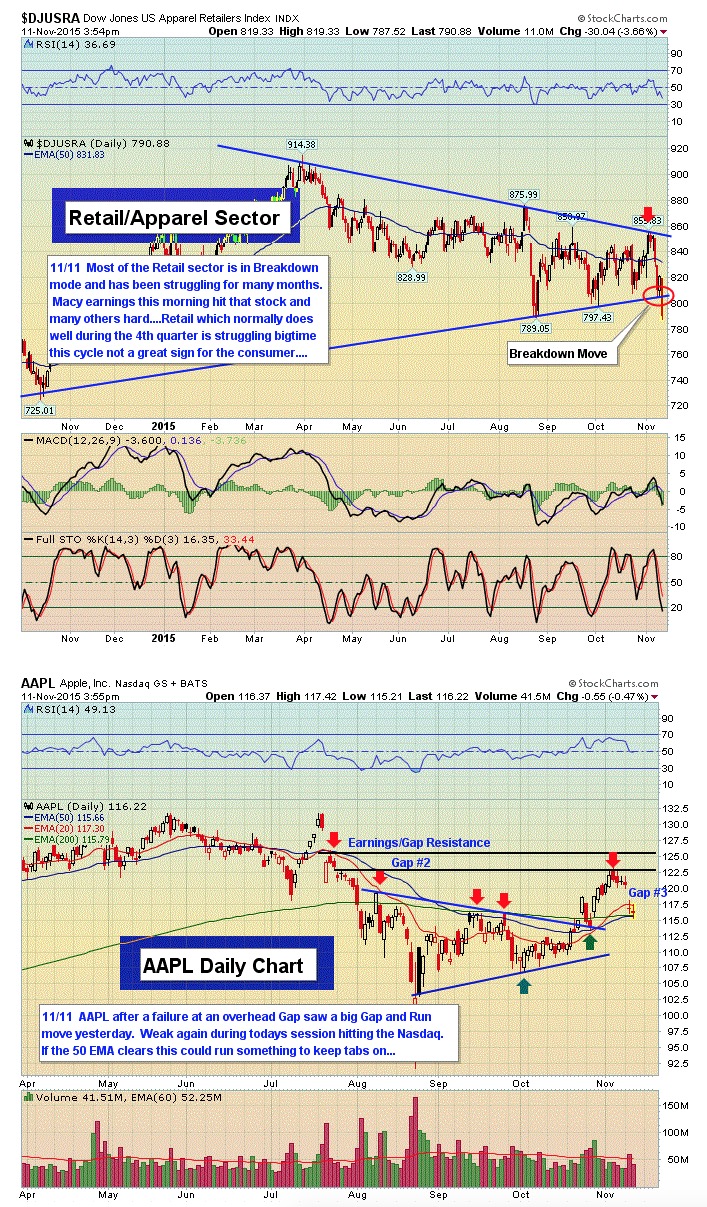 The market is staying alive thanks to froth in terms of a few high p/e stocks. Fb, Googl, Nflx and Amzn. They were all strong again today. Amzn off the charts strong. There are so many bad looking charts it's scary. One huge, massive breakdown after another all over the market place. For the majority of stocks in the stock market the bear market began six months ago or longer. Heavily weighted stocks like the big four I just mentioned and some financial stocks are holding the averages up but again, the majority of stocks are not in good technical shape. That's alarming and should open your eyes to what's taking place below the surface. Take a look at the Retail sector chart which is breaking down badly at a time when historically the sector does well...during the 4th quarter which brings into question the strength of the consumer who is getting squeezed by soaring healthcare costs, high rents at a historical level versus income, food inflation/product size contraction, high tuition, etc.  Next take a look at the AAPL chart which after an earnings bounce has now given it all back and now has 3 big Gaps down off the recent top where bears tend to fight on bounces.  Testing the 50 EMA currently if that clears the heavily weighted name could really run and hit the Nasdaq.  Carnage from earnings every day and carnage from a variety of other news every single day. No let up whatsoever. So be smart. Play where the going is good for now but be extremely careful. There are enough red flags out there to hint at what's to come over time. Let's hope for the one more new high first.

Join us for a free 3 week trial at www.TheInformedTrader.com