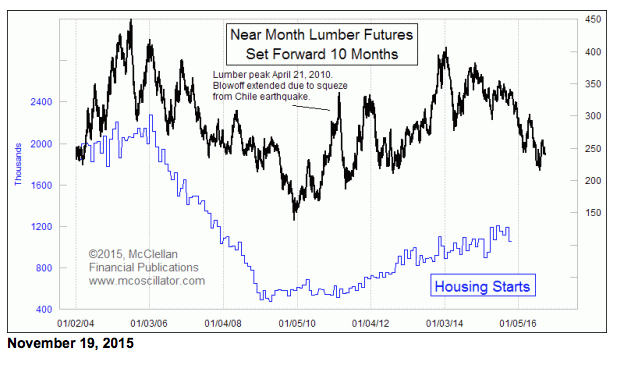 There are a lot of leading economic indicators in use these days, but the one I like the best is lumber futures prices.  Perhaps this is because almost no one else seems to pay attention to them as an economic gauge.  Lumber prices tell us pretty reliably and ahead of time about what is going to happen to real estate prices and activity, plus interest rates.  They can even tell us about what unemployment is going to do.

This week we got the latest update on U.S. housing starts, data which are gathered and published by the Bureau of the Census.  The latest numbers are for October 2015, and they are showing the lowest rate of activity in 7 months.  This is a downturn which I have been expecting to see arrive now, based on the message from lumber prices.

Lumber also tells us about what the data on weekly jobless claims are going to do: 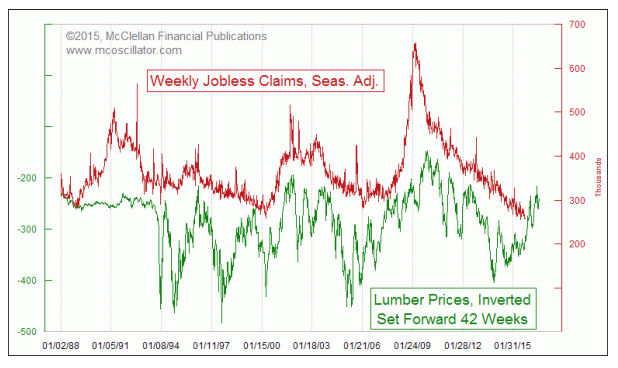 This chart looks at the seasonally adjusted data on weekly jobless claims, compared to lumber prices but with a twist.  In order to see the correlation better, I have inverted the data plot for lumber prices.  And it is also shifted forward by 42 weeks, which is about the same as the 10-month forward shift in the first chart on housing starts.

The downturn in lumber prices is reflected in this second chart as an upturn for the green line.  We have not yet seen much response in the weekly jobless claims data, but it is hard to imagine the jobs data refusing to show some sort of reaction to the dramatic action in lumber prices.

I have never heard a Fed official make reference to lumber prices as a leading indication.  Maybe it is something that they just don’t follow (but should).  Maybe it is not a glamorous topic to talk about.

Here we are, facing a likely start to Fed rate hikes at the Dec. 15-16, just as lumber is saying that a downturn in economic activity is coming.  We know from watching the 2-year T-Note yield that the Fed should have started this process a long time ago.  So now they appear to be finally getting around to doing the right thing, at the wrong time.