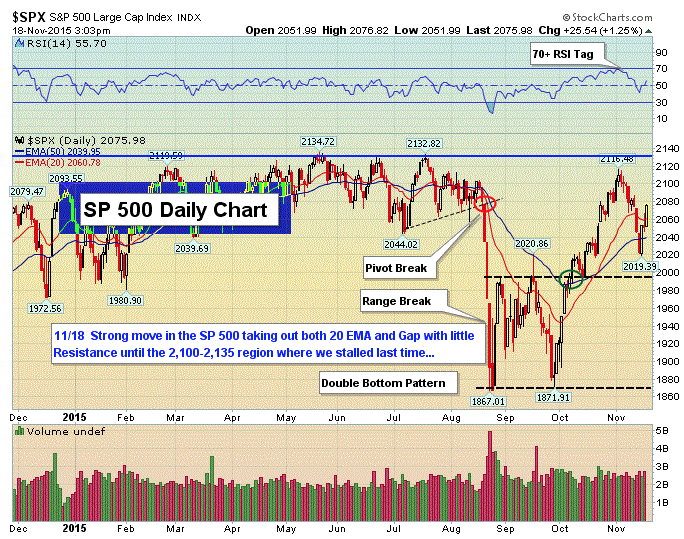 The stock market has been resilient no doubt. The bulls over and over are buying up moves lower ever since the bull bears spread got down to minus -10%. In a bear market -10% isn't all that important a reading. It can and will go much lower than that but since all we had was a correction, when we reached minus -10% the bulls became active once again. There hadn't been any real distribution volume on that last correction so that was one way to recognize that the bear had yet to begin and let's face it, the best way to blast off a new bear market would be to make new highs and get a negative divergence in real time on those horrible looking monthly index charts. We have worked our way back to +16% on the bull bear spread, but that's simply neutral and not playing into froth on any level thus the green light is still on for the bulls. All of this has allowed the market to hang tough after making a trip down to critical support on the Sp at 2020. After hitting 2022 we have moved quite a bit higher and are now looking to take out 2075 or major gap resistance on the Sp. If we can get above that we can try for new highs above 2134 on the Sp. Only time will tell if we get the move, but thus far you have to at least like the way the market held and blasted off support, often a good sign for the bulls in the near term. The energy just not there for the bears as of yet to get the next leg lower. 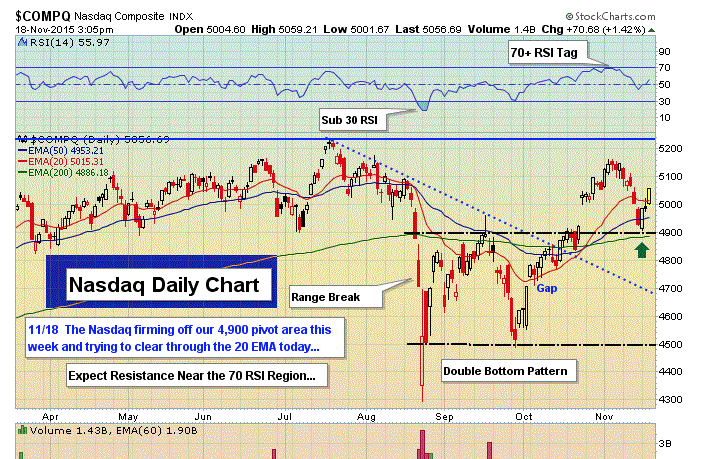 All eyes and ears were tuned in to those fed minutes which came out at 2pm eastern time today with the basic message being that things are on course for a rate hike come December. The market is hurting for a rate hike as it would show some confidence that the economy is at least growing a little bit. The market is no longer interested in zero rates as it represents weakness. Things or should I say, psychology, changes quite rapidly and thus we've gone from a market that wanted only zero rates to a market that wants slowly rising rates. It definitely doesn't want the beginning of a new rate hike cycle but it does want a slow move upward. Fear will turn to confidence if the fed would only speak about raising in December and again, when she did the market said good. Not great but good since she's already so far behind the curve. The banks should do well with this news for a while one would think. She also made it clear that there is no need to worry about any aggressive cycle of hikes. She knows there's no real strength in this economy or the global economy for that matter. She'd rather not raise rates at all but she knows the market wants it and thus she really has no choice. Remember her real job title which is 401k manager. If she could get away with it she wouldn't raise for years to come as she knows there's no real growth but again, she's so far behind the curve she really has no choice and seems ready to give in to raise number one of 25 bp's. The market overall did and should like this as it removes uncertainty as well as doing the right thing.

Check out the strong candle in the Banking sector below after the release of the Fed Minutes: 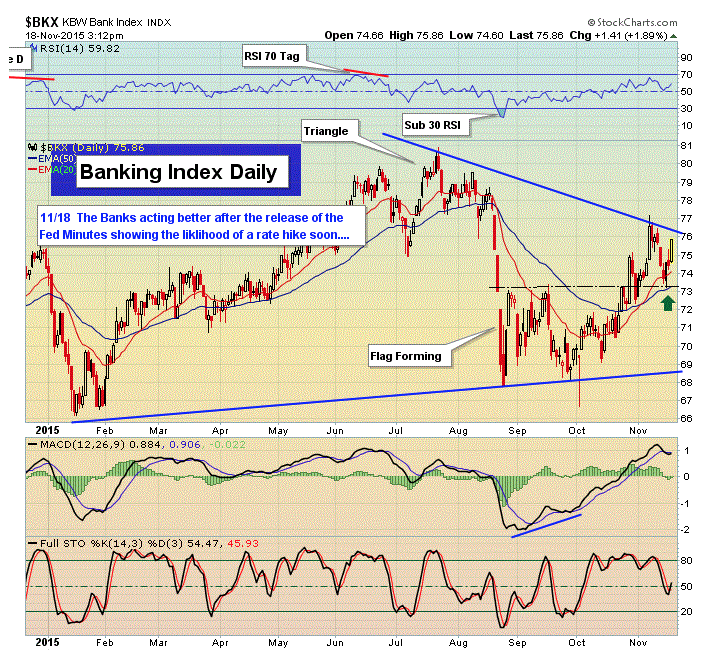 The market needs a strong close over 2075 to get rocking towards the old breakout level on the Sp at 2134. A close a few points above is not convincing. I like a move of at least half a percent or 2085. One percent is even more convincing, but I'll take a half percent and feel good about it as it gives room to back test and allow for some overbought unwinding. There are only two numbers that really matter to this market and they are Sp 2020 and the above mentioned 2075. A move 2020 on a closing basis with a bit of force would be very bearish for the short to possibly medium or even longer term. The move over 2075 as I mentioned could lead to a move to the old highs or even higher than that. The fight is on. As I've said before, a move to new highs makes the most sense since that would etch in stone a true negative divergence. Once that occurs you then wait for the topping stick and hopefully some distribution volume to confirm the top is on for the bull but we don't worry about that now. Our only focus is to recognize what's taking place in the short term and play it. There's nothing bearish yet but there's also nothing truly safe since those monthly index charts are so awful. Day to day with a keen eye on a strong close over 2075 being what the bulls are looking for and what the bears are dreading.