Front-loading the market - to levitate financial assets (presumably in hope for a 'rising tide to lift all boats' phenomena) is what we've assessed the Fed doing for years. Our issue was how they overstayed; especially as you got to QE3; at a point where the Fed needed to have been backing-off.

Officials argued this was still required, and delayed trying the first step towards normalizing rates most recently; which is part, but not all, of why we projected a topping phase of the secondary rebound (with the real last high being in July); at the same time believing they really had to move, even if it would backfire. 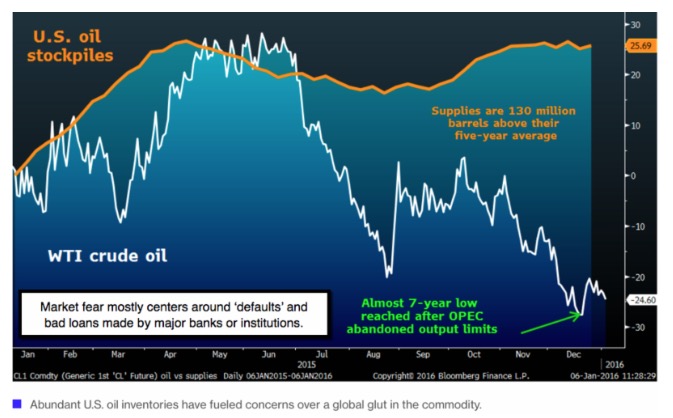 Confirming everything we have contended occurred just today; and that's both a reason why reporters were amazed, and we smiled, to hear now-retired Fed Dallas President Dick Fisher, come forth to candidly say the Fed did just that: front-load the stock market. The candor was refreshing; denoting a rare flat-out acceptance of credit (or blame) for the Fed artificially helping levitate stocks. It matters as he was on the FOMC; whereas we're just analysts. But it confirms a suspicion that was a goal; probably with hopes to 'lift all boats, not just yachts'. 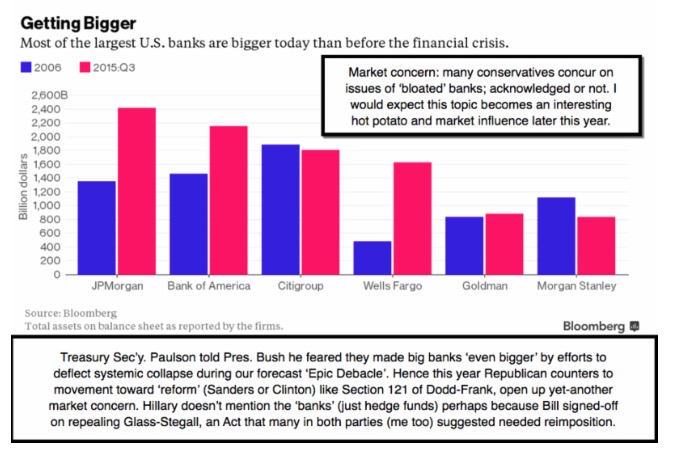 This matters given the political hangling (Hillary Clinton compelled to explore at least the outer edges of the topic; while Bernie Sanders goes head-on). Given a recollection of even George Bush's concern about 'bloated bankers', this may become a populist battleground with 'both' parties focused on more than hedge fund reform or tax adjustments. Markets might not take kindly to this either. 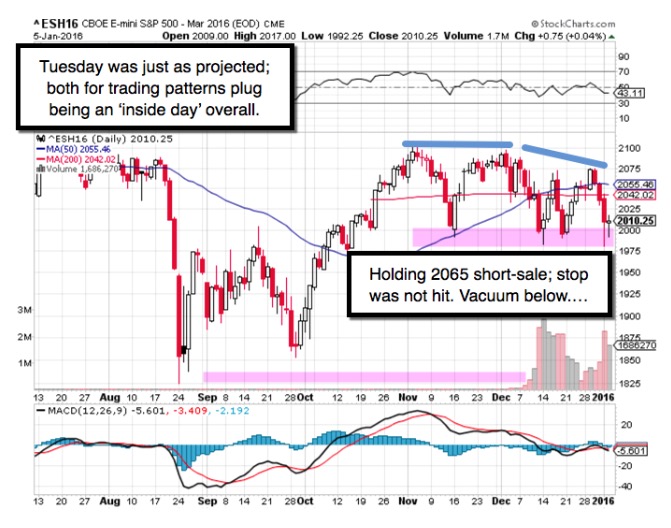 Daily action - rebounds are so weak that markets are capable of just breaking harder at any time. It is important to remember rebounds are desperate efforts to avoid a close below the November / December S&P lows (which we see as forthcoming). Also (noted in video Tuesday evening), the North Korean nuclear test and the latest further Chinese devaluation, will also impact markets. 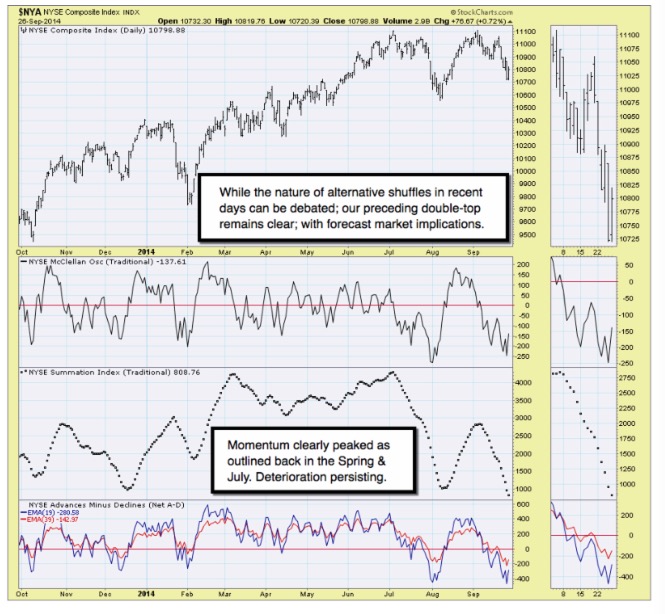 (Crunch time: discussion of Disney, Apple, and even the EU after a marauding melee in Cologne Germany, are noted; due to their impact on the backdrop.)

Hence our short as retained from March S&P / E-mini 2065. The 2015+ mental stop was approached but not hit; so we remain basically fully short still. Now a few CES tidbits with my embedded reflections (mostly redacted). 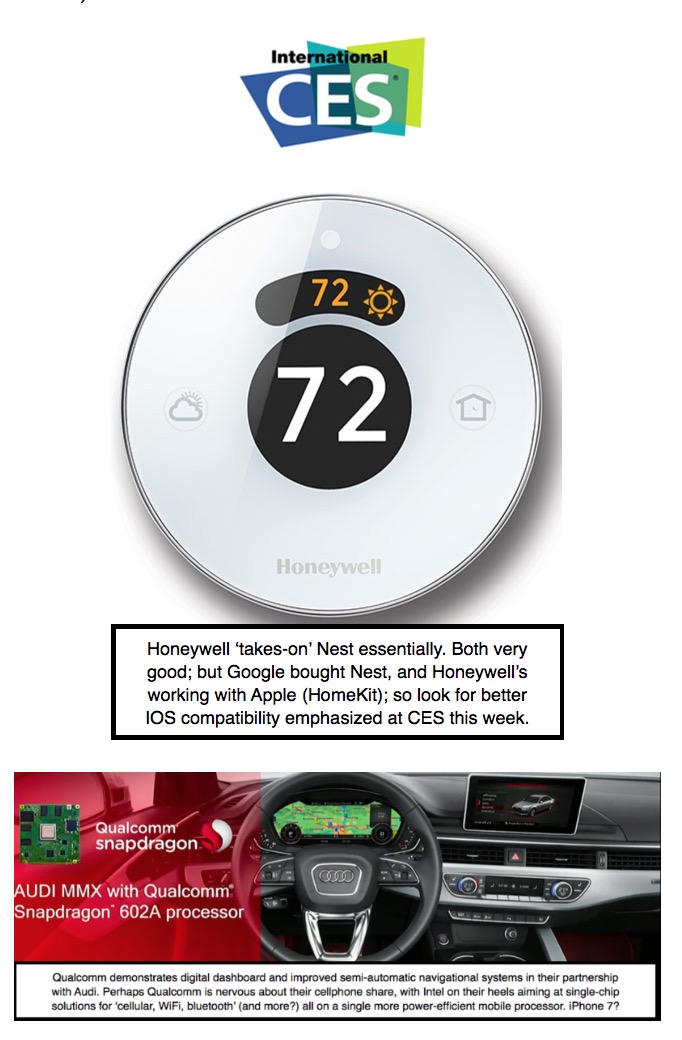 A striking series of shifts - are slated to occur in 2016, setting-the-stage for a pattern evolution that is anything but sanguine; anything but a simply range for trading as we saw during the forecast 'distribution year' of 2015; and which has potential for more than this plug-pulling, primarily as 'Street Bulls' (redacted).

Companies with large pension deficits will continue struggling to under-perform, it seems, because of this failure to broadly re-set total return goals. As present value of their future liabilities continues to rise; (redacted). Alongside a mixed asset return reality, pension funding ratios continue to deteriorate as similarly, insurance companies struggle with reinvestment yields and solvency ratios.

Recently, Sovereigns have commenced issuing debt at record-low-or altogether negative-yields. In April, Switzerland became the first country to issue 10-year government bonds at negative yield; other governments did the same at shorter maturities. (Implications of this discussed with subscribers.) 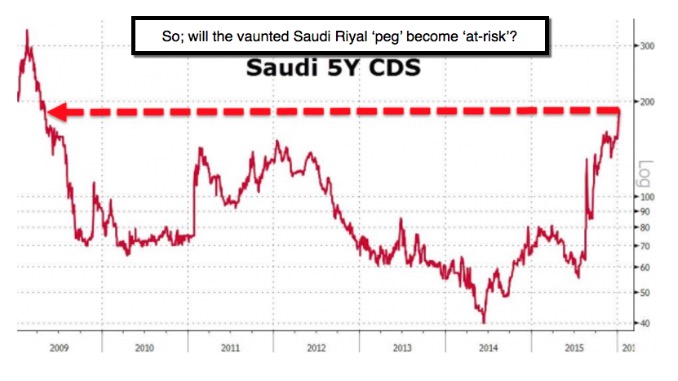 In sum - running into a 'brick-wall of resistance' began in-earnest in the last two trading days of December, as shares would settle in the new 2016 trading year.

While we envisioned America leading us (the world) out of the morass, much is thwarted by geopolitical events; overreaching by politicians (allowing a 'reverse colonization' in the EU is yet another); and above all perhaps; China's reversal of commodity hoarding schemes, and the Saudi-led Oil war against Russia and indirectly the Nation that supports the Saudi's (the US). 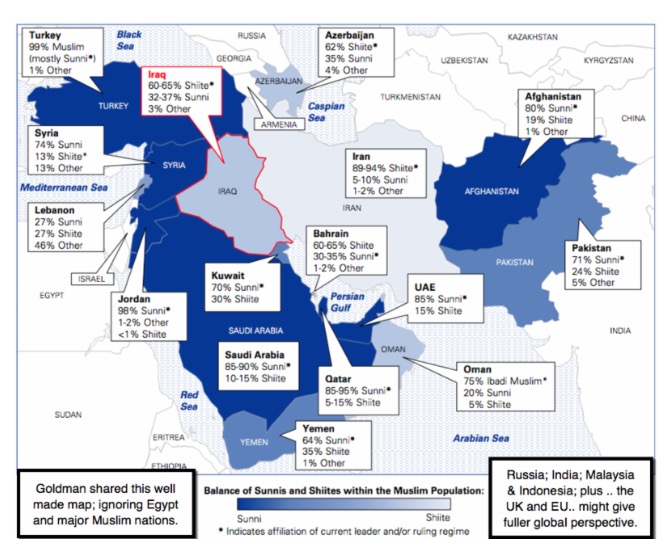 This year look for Oil (reserved for members). At the same time US leadership on fighting Jihadism and Islamism 'in general' has been sorely lacking, and the American people know this.

In a nutshell: aside concerns including Oil; time ended for institutions, as well as banks, to sustain themselves on sheer faith in perpetual levitation by supportive central bank stimulus, and seemingly permanent low rates. That era started unwinding as projected during Spring & Summer 2015.