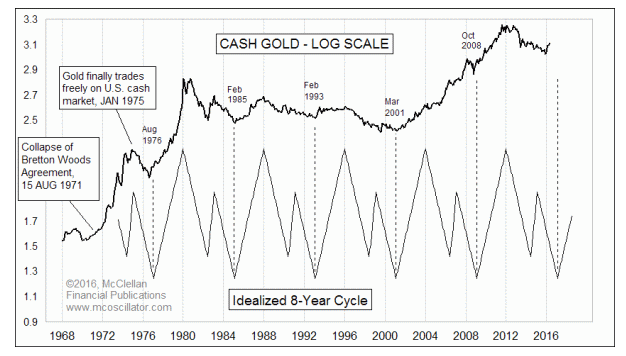 There is a major cycle low looming for gold prices.  Ideally it should arrive as a price low in late 2016.  But based on history, it could arrive anytime between August 2016 and March 2017, and still fit within the normal tolerance.

Defining a normal tolerance for gold’s 8-year cycle is a pretty iffy proposition.  We have only 5 prior examples to go by, and while they cover a period of over 40 years, anyone who ever studied statistics knows that n<30 is problematic.  If you want to wait until n=30 before believing in this cycle, then you only have to wait until the year 2215.

If you are willing to accept the message from fewer iterations, then this week’s chart has some interesting insights to offer.  A few years ago I constructed this idealized 8-year cycle pattern, and featured it in our newsletter.  The one leg up, 3-waves down pattern has “worked” ever since gold finally started trading freely in 1975, with one major exception.  From 2001 to 2009, the normal “left translation” flipped to a more bullish right translation mode.  Aside from that one strong uptrending period, gold’s price pattern has matched this artificial pattern pretty well.

The relevance of that insight for the current period is that the next major 8-year cycle bottom is due this autumn.  Ideally it should be due in February 2017, but another tool suggests that late 2016 is more likely to see the arrival of that bottom. 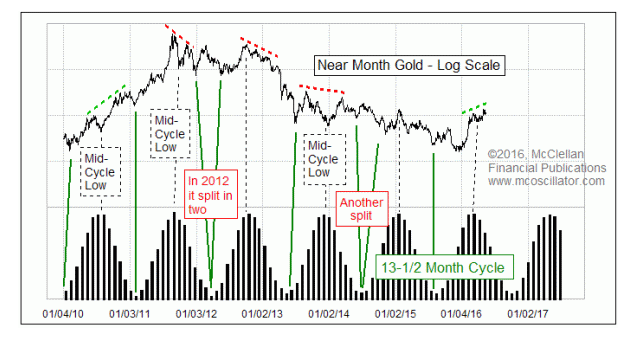 There is a dominant 13-1/2 month cycle in gold prices.  The next major cycle low is ideally due in October 2016, but gold regularly makes bottoms plus or minus a month from the ideal cycle bottoms.  So this is not a tool that will allow anyone to reasonably pencil in a hard date for when the cycle low is due.

Still, an autumn 2016 bottom for the 13-1/2 month cycle fits well with the idea of a major 8-year cycle low due in late 2016 to early 2017.  One additional insight from the 13-1/2 month cycle is that we have already seen “right translation” of the price pattern versus this cycle, and that one piece of information conveys bullish portents for the likelihood of a higher price high for gold in 2017, once we get past the upcoming big cycle low.

Bottom Line: We have two major long-term cycles, both calling for an important bottom in gold prices in late 2016.  That’s a big deal.  The two are independent of each other, and their confluence in calling for a bottom later this year has strong implications.  Gold prices ought to be expected to drop downward into that cycle low, but more importantly we should expect a big uptrend to commence out of that major cycle bottom.  It will be hard for gold bugs to be patient and wait for that major cycle low to arrive, but the long term cycles say that the ensuing rally should be worth the wait.