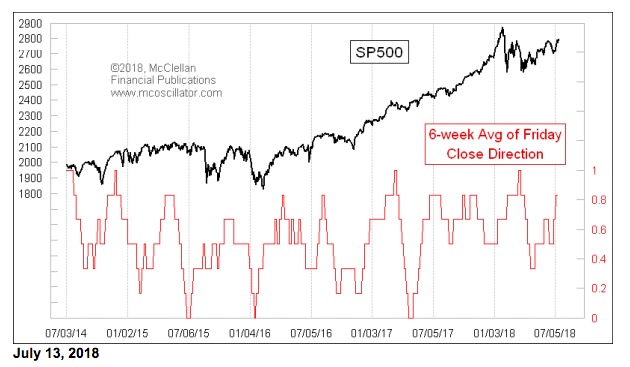 The SP500’s higher close on Friday was one of several up Fridays we have seen recently.  Moving up or down on a Friday can convey a message about investor sentiment, especially when multiple Fridays see the market go in the same direction.

To be a buyer on a Friday, one has to accept that you cannot get out again until Monday.  So it takes some degree of confidence that “event risk” won’t be a problem over the weekend.  When people are feeling fearful, Fridays are more likely to see a lower close.  And by the same token, bidding up the market on Fridays can be a sign of confidence.

I have played around with different lookback periods, and found that 6 weeks works pretty well.  If you can see 5 out of 6 Fridays going either up or down, that is usually a pretty good indication of a top or a bottom for prices.

By going up on Friday, the SP500 made it now 6 Fridays out of the last 7 weeks.  And that one down Friday was on June 15, which saw the SP500 fall by only 2.83 points, so it was just barely a down day.  This is not quite as compelling an indication in the chart as if we had 6 in a row, but it is usually a pretty good sign that traders are not at all worried about event risk popping up over the weekend and biting them.  And as every good contrarian knows, that is when risk is most likely to appear.