With the Federal Reserve admitting it wants inflation and injecting $80 billion per month into the banking system for the foreseeable future, regardless of what traditional analysis and history suggest, then, until proven otherwise, the odds favor a continuation of the uptrend for stocks. That said, we should not throw caution to the wind as much may change in the not-too-distant future, depending on the results of the election and the possibility of unknown and otherwise catastrophic developments beyond anyone's control.

Still, because of the Federal Reserve's ongoing money creation and the general change in the way the public seems to be perceiving the COVID-19 situation at the moment, the sluggish action of the past two weeks, unless something changes, seems more like a consolidation and sector rotation instead of a full-blown correction. What that translates to for investors is that making money in the current market is not so much about owning stocks, but more about which stocks are included in a portfolio and how much trading discipline and planning is applied to every single position.

MEL is in Motion - Often in Subtle and Undetectable Ways

Sometimes it pays to take a step back and give the action in the stock market a bit of abstract thought. And, most certainly, this is one of those periods of time where connecting the dots from a different angle is crucial in investing profitably.

Specifically, due to the seismic effect of the COVID-19 pandemic, the extraordinary monetary stimulus response from the Federal Reserve and the advent of artificial intelligence algorithms (algos) doing 80% of the trading on Wall Street, we are living through what may prove to be a once-in-a-lifetime secular change in the complex adaptive system composed of the markets (M), the economy (E) and people's lives (L). As a result, exclusively relying on recent history as a guide to the future, especially when it comes to investing, is not as useful as it once was.

For example, where the economy was once the leading influence in MEL, the Fed's actions have made the stock market the leader of the system now. Of course that sounds bizarre. But it's demonstrable. Consider the fact that those who own 401 (k) plans and IRAs, along with those otherwise actively trading or are invested in stocks, are likely experiencing a significant wealth effect. Certainly, that could be fleeting. Yet in the present, the rising stock market is a major influence on their spending decisions, which in turn are affecting the economy.

In addition, in order to maximize investment results, it's important to understand the major influences and themes that are affecting the markets. And here are three of them, as I listed in this space last week:

Each of these major influences is creating megatrends which are being displayed in the stock market via the flow of money into different stocks and sectors. And what is becoming increasingly evident is that the stock market is at least equally focused on the world beyond COVID-19.

Consider this interesting example regarding Albemarle (ALB), a specialty chemical company with a major footprint in Lithium-related compounds, especially those geared toward lithium batteries such as those used in electric vehicles and consumer electronics. It also has its legacy divisions focused on Bromine and chemical catalysts used in a wide array of industries, ranging from pharmaceuticals to oil drilling and energy storage.

I recommended the stock a few weeks ago and it had mostly been dormant, continuing its consolidation pattern, until it recently showed signs of life as it moved toward the upper end of its recent trading range. Note that even as the stock sagged below $90 recently, it has remained above its 20- and 50-day moving averages as the dip buyers materialized consistently to bring the stock back into the trading range.

So, the obvious question is, why would anyone be buying shares in ALB when the expectations are for a stagnating electric car market, especially when the company recently idled two lithium plants due to weak demand? 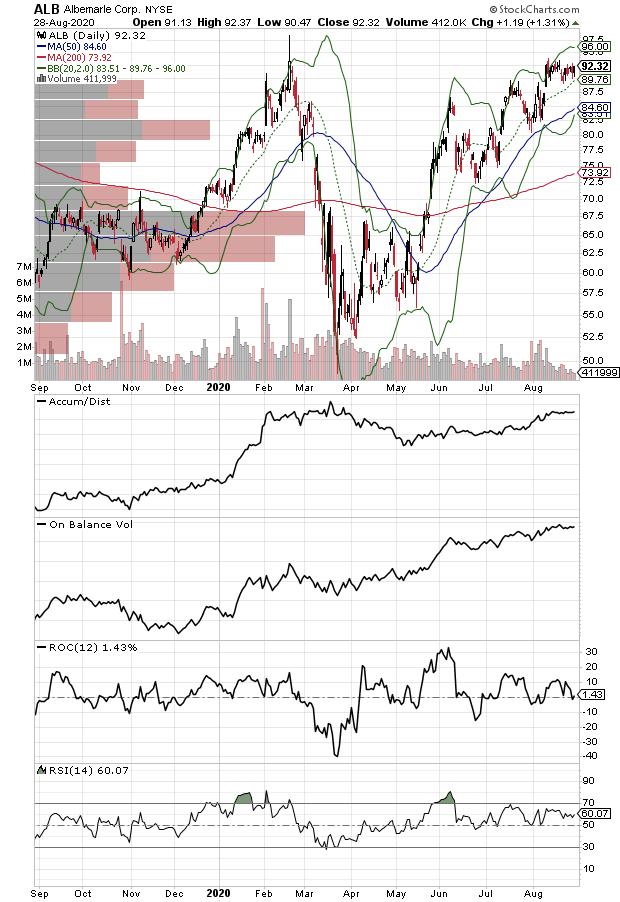 The answer is actually fairly simple, albeit requiring some digging beyond the obvious. Even if electric cars may not be the dominant transportation for people, at least not yet, there is a perhaps more important and silently growing trend for electric delivery vans. Consider Amazon's (AMZN) recent order of 1800 Mercedes electric vans for delivery in Europe on top of its order from U.S. startup Rivio for 100,000 delivery vans.

Moreover, both Ford and GM are ramping up both electric van and car productions. What that means is that even though Chevy Volts are not household items and Teslas are still at the boutique end of the auto industry, there is a steady and dynamic change under way in the industrial sector of the economy toward electric vehicles.

The bottom line is that we are witnessing a stealthy behavioral change in the van sector and that the market seems to be factoring in a rise in demand for Lithium as business fleets increase their electric vehicle numbers. In other words, even in the face of COVID-19, behavior patterns in business and transportation are changing, MEL is evolving and the machines are trading.

Check out my most recent edition of Your Daily Five HERE ,where I offer crucial details on how to pick stocks that are displaying explosive potential.

A Triple Shot of Portfolio Caffeine: The Fed, Monster and Starbucks

In an uncertain world, all an investor can do is (first) follow the money and (second) try to figure out what the flow of capital means. Certainly, that means that sometimes you have to be a contrarian, albeit with some cautions. In fact, two excellent examples of this dynamic involve two stocks which I recently recommended and which share one common characteristic, the provision of caffeine to the masses: Starbucks (SBUX) and Monster (MNST). 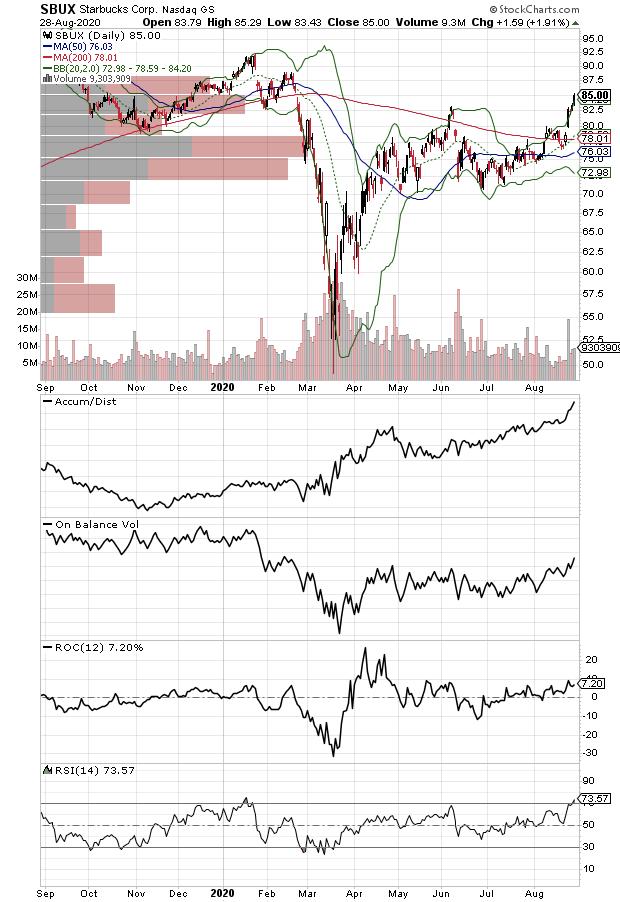 My most recent recommendation in the realm of caffeine is Starbucks, the world's leading coffee store operator. The stock got clobbered along with the restaurant sector in March 2020 in response to COVID-19, but managed to bounce back with the market in the ensuing months.

It then delivered a lackluster earnings report and began what seemed to be a significant decline. Until, of course, the dip buyers came in. More recently, soon after I recommended it on August 11, the stock has broken out and is now reaching the critical $88 area, above which there is little resistance. The stock has plenty of momentum, however, and looks to have a decent chance to move well above $88, although it could consolidate near $85 in the short term. 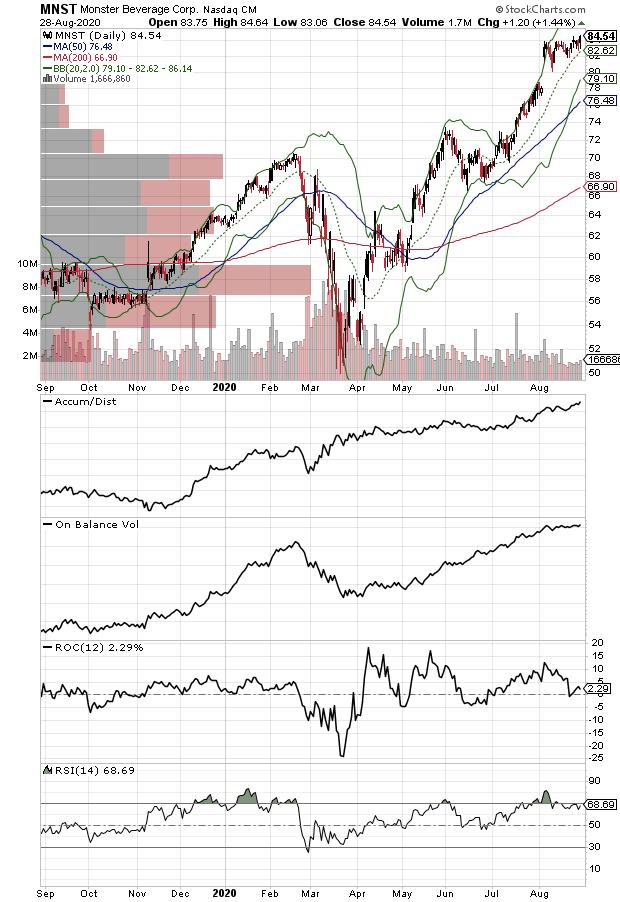 Monster, on the other hand, has been in the JoeDuarteInTheMoneyOptions.com portfolio since June 9 and delivered a nifty breakout soon after I recommended it. Unlike SBUX, Monster delivered a better-than-expected earnings report and gapped even higher before entering its current consolidation pattern.

Still, despite its very bullish action, MNST looks ready to break out and move above its current resistance area of $85. Both stocks remain under accumulation, with On Balance Volume (OBV) and Accumulation Distribution (ADI) supporting the notion that higher prices are likely. And while SBUX has three year resistance near $98, well above its current levels, MNST is trading nearly $15 above its three-year highs.

The bottom line is that we are experiencing an unprecedented Federal Reserve-fueled momentum market of indescribable circumstances. And while things will end at some point, these two stocks, at least for now, seem to be riding on not a double Espresso high but on a continuous intravenous infusion of extra strength and 100% caffeine.

To learn more about stocks such as Starbucks and Monster that are poised for chart breakouts, click HERE for a Free trial to JoeDuarteInTheMoneyOptions.com.

NYAD Finds Support - Is Now Within Reach of New High

The bulls may have gotten a reprieve as the New York Stock Exchange Advance Decline line (NYAD) found support at its 20-day moving average and is within reach of a new high, which would confirm the recent action in the major indices. 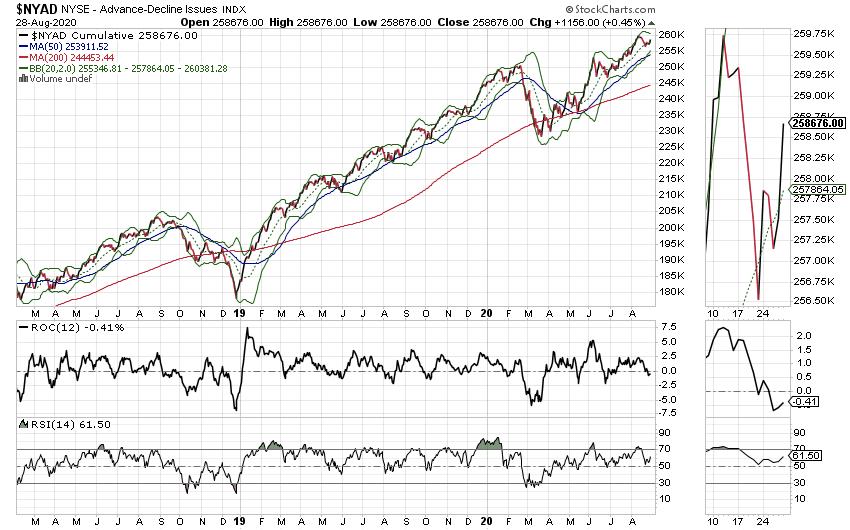 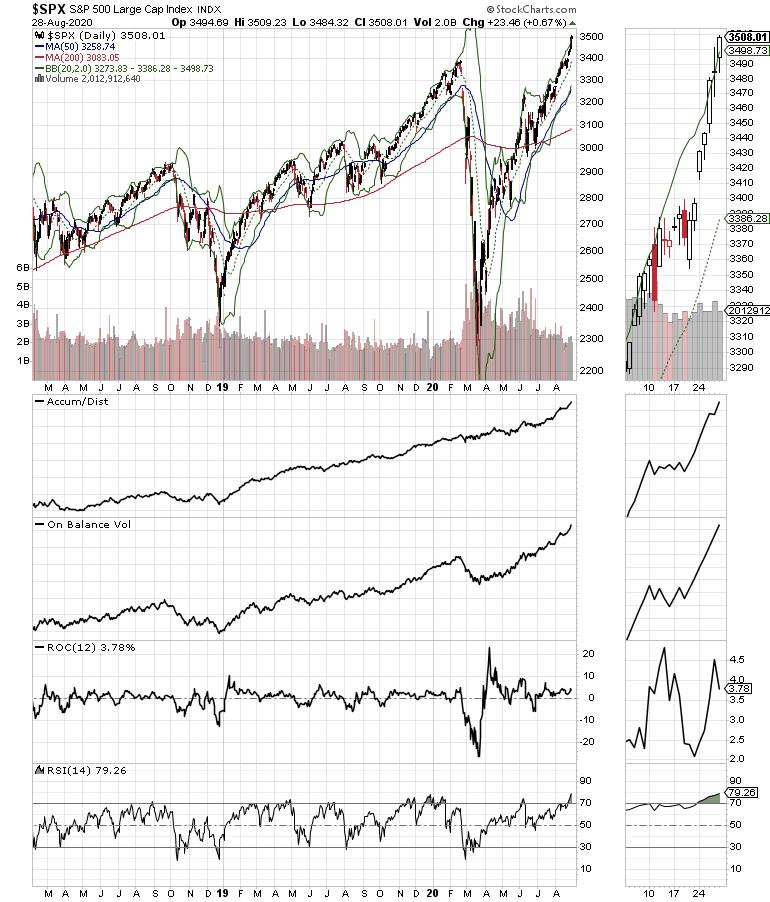 Still, the technology sector is well overextended now, and it's likely that NDX will slow down and consolidate in the short term or even pull back to its 20- or 50-day moving average. 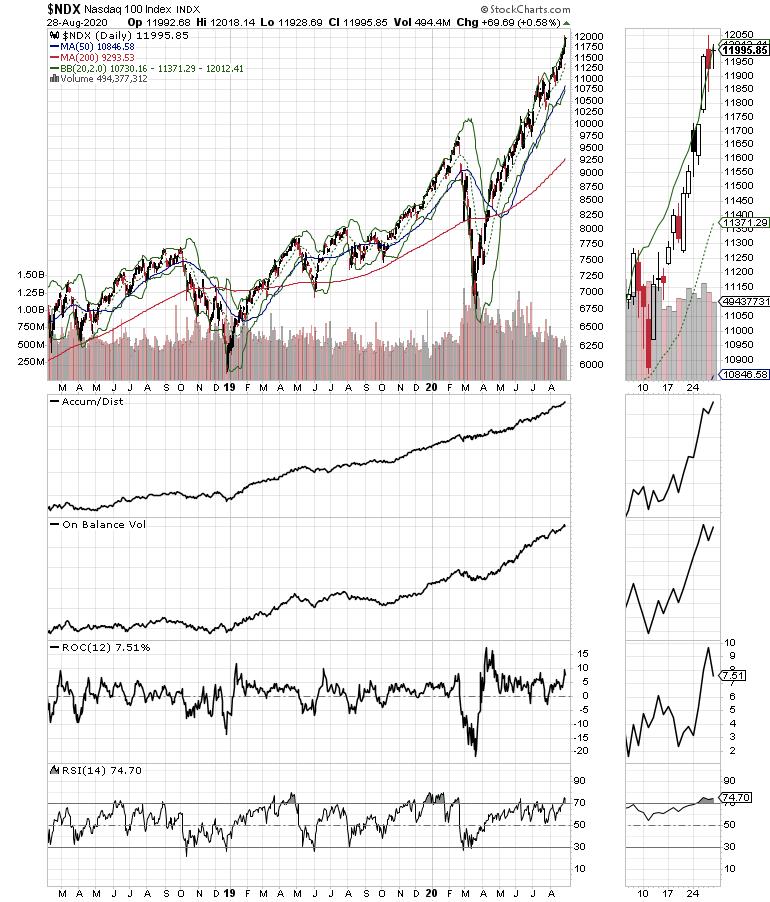 However, even as the major indices continue to move higher, if NYAD fails to make a new high in the near term, the case for a possibly meaningful technical divergence would likely increase.

Fed-Fueled Momentum Remains the Number One Influence on Stocks

Regardless of what anyone believes, it's obvious that the stock market is biased toward the upside. Certainly, the potential for a technical breadth divergence remains a potential negative which should not be ignored.

Therefore, it's still a good thing to remain cautious, but it's not a good idea to be outright negative just yet. Moreover, the seasonal tendencies are in favor of the bulls as the fourth quarter of a presidential election year is usually bullish.

What it means is that the best anyone can do is to trade wisely by focusing not just on the market's trend but on the action in each individual position. It's also wise to trade in small lots, take profits when warranted and keep reasonable sell stops in place.

I own shares in ALB, MNST and SBUX as of this writing.