In what is becoming an increasingly murky world, especially after President Trump's COVID-19 diagnosis and the ensuing developments, one thing is clear - the market is dividing its time in worries. Of course, the concerns about Trump's health and its potential repercussions are valid. Yet it is also valid to monitor the status of the political process regarding the combination of aggressive fiscal and monetary stimulus that has boosted stock prices since the spring.

Indeed, this bipolar set of concerns is substantiated by the fact that the algos are buying and selling aggressively on most news items which relate to the above mentioned topics. Moreover, until proven otherwise, it seems as if dip buyers are ready to pounce on just about every pullback when any hint of bad news is reversed by a positive headline. Moreover, due to the rising number of White House cases and the conflicting reports about the president's health – his doctor says he's doing okay and the leakers say he's not – a lot could happen in the market by the time the futures open on Sunday night.

Certainly, these events can make it difficult to trade on a short-term basis. So, instead of handwringing and trying to guess what the next headline or its effect on prices might be, it's imperative to cut through the clutter and the intraday noise by developing, reviewing and updating a set of viable trading principles or rules.

Regardless of your timeframe, as an investor your performance depends on the trading rules you use to sail through up and down markets. And, over the years I've put together a set which has served both my subscribers and me well. Certainly, they are not the only trading rules in the world. Yet, one thing is definite: these principles are very useful, especially in topsy-turvy markets. So as you trade, consider the following:

Indeed, in a volatile market, it's most important to realize that finding winning stocks is often more difficult than in an up trending market. Nevertheless, by staying connected and focusing on individual stocks, patient investors often find payoffs, as I describe below.

Buying on the Dip in a Tough Market

Investors often wonder what the characteristics are that make a stock a good buy on a price dip. So here is a detailed summary of such a trade in its early going, as it stands as of 10/2/2020.

Certainly, one rule that has served me well is that once I sell a stock, I rarely go back to it. Be that as it may, there are exceptions to every rule. And the exception is that, if the stock recovers enough to display those characteristics which suggest that it can again rise significantly, it goes back on the BUY list. Here is an example.

I recently recommended repurchasing shares of retailing giant Target (NYSE: TGT) as it emerged from a recent dip. Incidentally, TGT is a stock which we had previously owned in 2020 and which we sold on 9/4 for a nearly 18% profit after buying in late July. More recently, I recommended the stock on 9/29/2020 near $156 and it closed on 10/2/2020 above $159, delivering roughly a $300 profit per 100 shares (approximately 2%). More important, the stock remained above key support, which suggests that the stock could go higher. 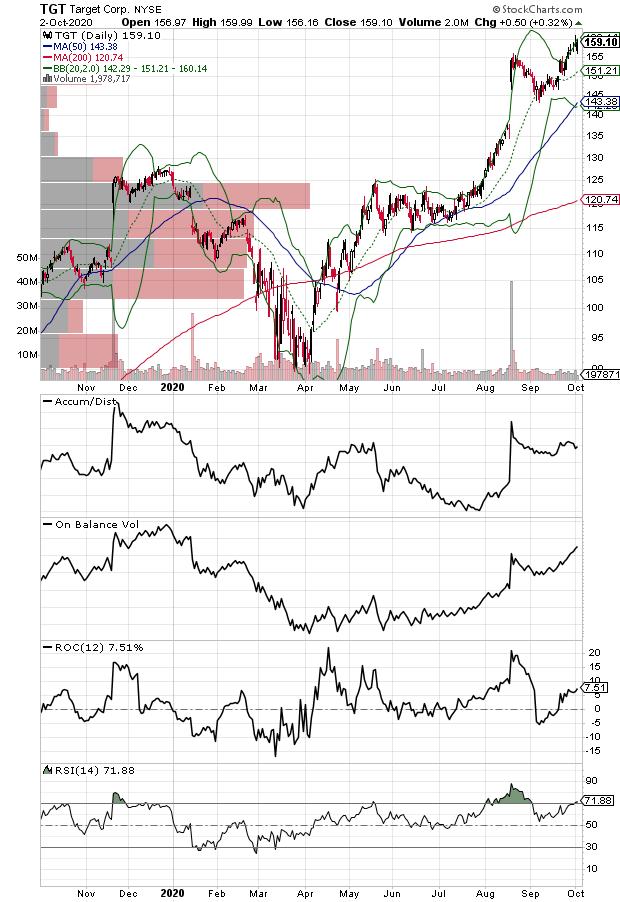 So here's why I recommended getting back into TGT and why it made sense to buy it as it neared the emergence point of its recent dip. The stock:

Let's look at more details. Before the stock took off, the Bollinger Bands signaled a decrease in volatility, which is usually a prelude to a big move. Moreover, as the price started to move higher, key money flow and momentum indicators confirmed that the move was likely to the up side. Finally, the very small bar in the VBP indicator tells us that that there are few sellers on the sidelines waiting to cash in on higher prices, which gives the stock essentially a free pass to move higher.

Thus, if I'm right, and nothing as of the close on 10/2/2020 in the indicators or the price action suggests that the stock is about to collapse, TGT should move decidedly higher over the next few days to weeks with a short term target of $165.

What could go wrong? Certainly a market-related event, of which there could be not one but several, could crush all stocks. Secondly, the company could decide to reveal some bad news which could cripple the shares. In either case, or if the stock sells off for any reason, always use a 5-8% sell stop to limit losses. Nevertheless, barring any unpleasant surprise, TGT looks poised to move higher.

So, to summarize: When buying on dips, look for stocks that are actually on the recovery track from the dip, analyze the Bollinger Bands to help with the timing of the entry point and confirm the fact that the flow of money is positive. For more information on stocks like TGT and how you can trade successfully in any market, take a FREE trial to Joe Duarte in the Money Options.com. Click here.

I have an open position in TGT as of this writing.

NYAD Recovers, But Needs to Deliver All Clear

The New York Stock Exchange Advance Decline line spent a few days in Duarte 50-50 Sell Signal territory (below its 50 day moving average, with RSI below 50). But, by 10/2/2020, the indicator had recovered. Of course this is good news, but NYAD needs to do a bit more work before it gives the all-clear signal. 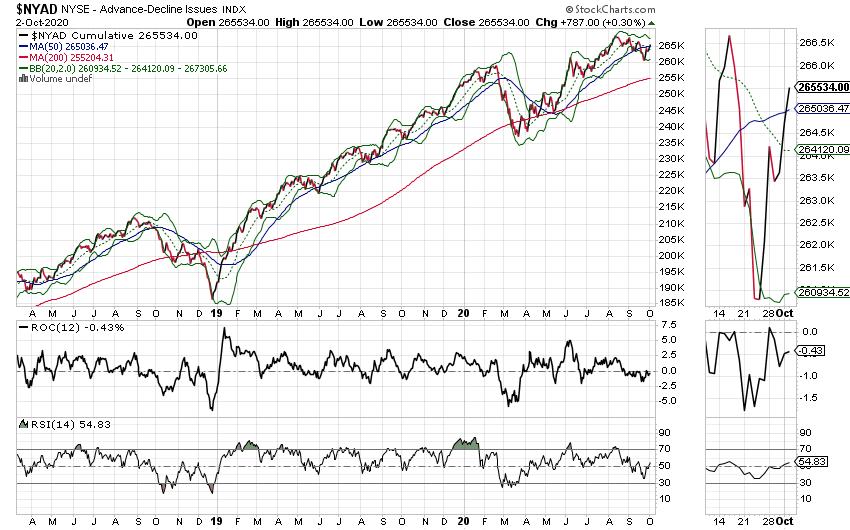 First, it needs to stay above the 50-50 Sell Signal parameters. Second, it needs to make a new high over the next few days in order to validate the uptrend. Indeed, that combination of events, until reversed, would signal not only that the uptrend is intact, but that the market is also building upward momentum. 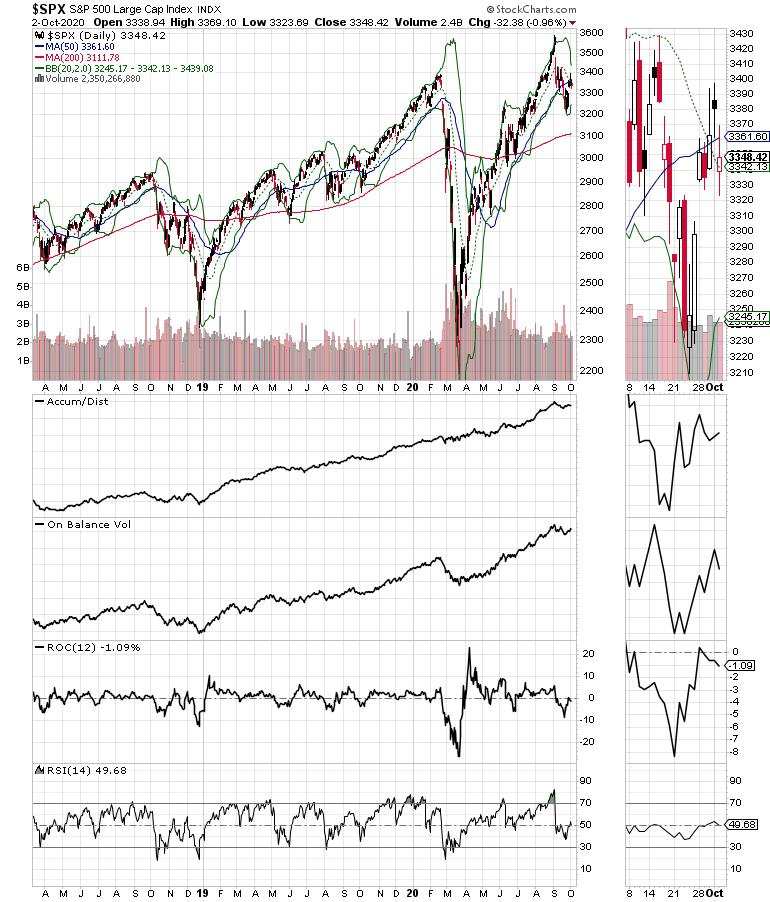 The S&P 500 (SPX) did not fare as well as NYAD, as it failed to close above its 50-day moving average while its own RSI closed the week below 50. 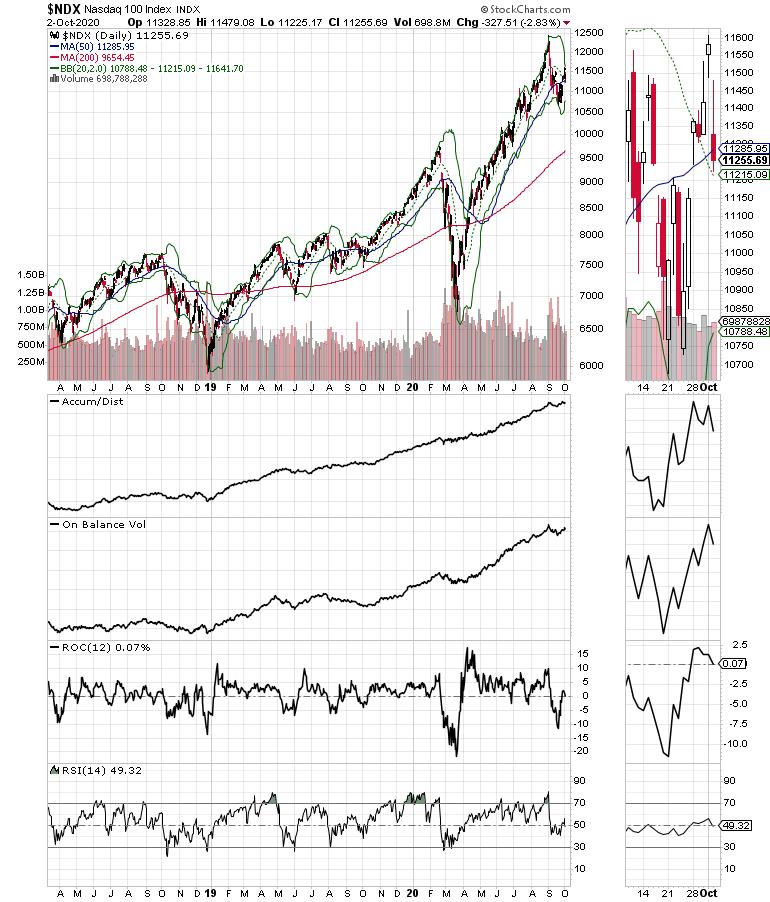 The stock market is clearly trying to recover, but uncertainty is rising. And while the market's breadth has certainly improved, the major market indexes remain undecided. Of course, with news that President Trump was transferred to Walter Reed Medical Center late Friday afternoon and subsequent developments, there is likely to be more uncertainty and price volatility is likely.

What it all boils down to is that all investors should be ready for more market volatility as the election nears and Trump's health concerns suddenly move to the forefront of the Wall Street worry list.