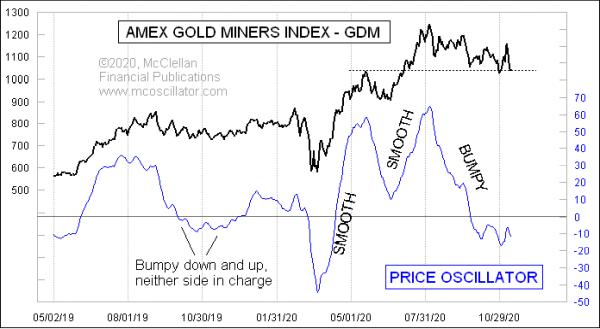 There is more information in the plot of a McClellan Price Oscillator than just up or down, high or low. Looking at its structures can give us additional information about the strength of a trend.

This week's chart looks at the AMEX Gold Miners Index (GDM), which is showing us things right now which make for a good opportunity for a lesson about Price Oscillator structures. The Price Oscillator for the GDM is falling right now, but there is more information in its chart plot than just up and down. How and when that happens matters.

That is important now because the consolidation since early August has been accompanied by a bumpy down move. Even this latest Price Oscillator downturn, which started this week, just appears to be a continuation of that bumpy downward move.

The bears showing weakness this way does not mean that the bulls have to take charge now, just because we notice it. The bulls may not take charge at all; it is possible for both sides to show weakness. That is what we saw around the 10/30/19 gridline. Bumpy down was followed by bumpy up, and prices really did not go anywhere. So that outcome is a possibility.

This next chart is one that we include in the introductory material for new subscribers, helping to make the point about bumpy versus smooth Price Oscillator structures. 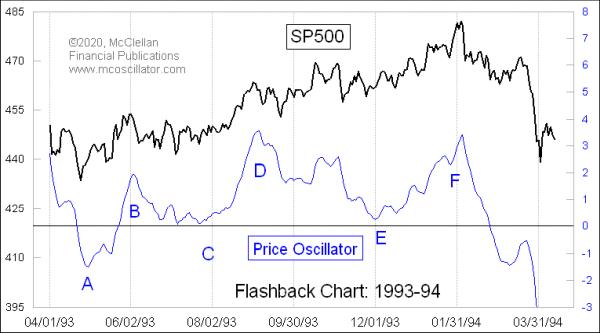 Back in 1993, the S&P 500 was in a gentle uptrend, but still saw mostly smooth Price Oscillator up moves from A to B and from C to D. The bumpy down moves from B to C and from D to E, gave confirmation that the bears were not showing any strength. So, even though there were consolidations along the way, the bulls were still strong and in charge.

That picture changed after point E, when the Price Oscillator started a bumpy up move toward point F. The bumpy up structure said that the bullish strength was waning. The uptrend was still able to make marginally higher highs along that weak up move to the final price top, but the bumpy Price Oscillator said that the bulls' hearts were really not in it and that trouble could be brewing. And a noticeable decline unfolded from point F into 1994. 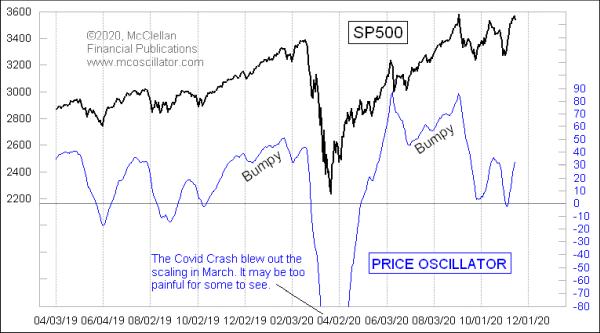 There were some informative bumpy up moves ahead of the February 2020 top and the September 2020 top. Aside from those, there have been mostly smooth up moves and smooth down moves, including right now. So either side could be the strong one right now. Life is not always as neat and pretty as the textbook examples.