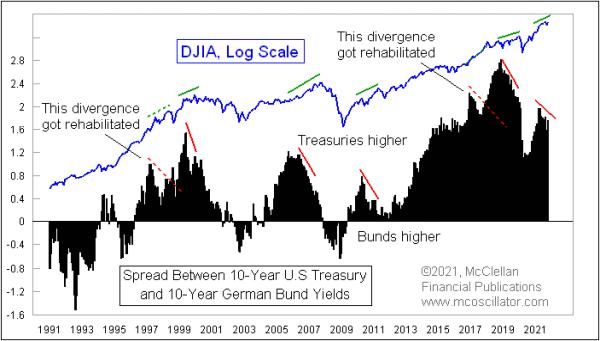 The 10-year T-Note is yielding 1.636% as of Oct. 20. The equivalent German bond is still at a negative yield of -0.119, although that yield is rapidly racing upward toward positive territory. These German bonds are referred to in the bond market as "bunds", which is short for the German word "bundes", meaning federal.

The interesting point about this yield spread between U.S. and German 10-year bonds is how well that spread correlates to the movements of the stock market. Or, at least, that is the case most of the time. When they start disagreeing, that is when the relationship gets more interesting.

The yield on German bunds is rising (becoming less negative) faster than the U.S. 10-year T-Notes, which means the spread shown in this week's chart is falling. Normally, this spread moves in step with the stock market, so this behavior creates a bearish divergence relative to the DJIA. That is a problem, although, as we see from a couple of examples in the chart, it is not necessarily an insurmountable problem. Sometimes, divergences can get rehabilitated.

For now, however, this is a warning of trouble for the stock market, much like the warning that this spread gave us before the COVID Crash. That divergence did not cause the emergence of the virus, nor the reaction of multiple governments to shut down economic activity in response to the virus. But it did show that the financial markets were in a vulnerable state, poised to react more strongly to the appearance of outside stimuli.

Now we are seeing a divergence again. We will know in a few years whether it is a true one, not a "transitory" one (since that seems to be the word of the day this year). For now, the message is that the market is vulnerable to the type of pullback that we saw in 2000, 2007-08 and 2012, when similar divergences appeared.