The NASDAQ and Russell 2000 outperformed in a big, big way on Monday and that's always a very positive sign for equities.  In addition, strength came from technology (XLK, +0.75%) and financials (XLF, +0.64%), two of the aggressive sectors.  Once again, we saw consumer discretionary (XLY, +0.13%) clearly outperform its staples counterparts (XLP, -0.38%), another positive.  Finally, the XLP and utilities (XLU, -0.60%) were lagging, reflecting weakness from defensive components.  All in all, it was a very solid performance for the U.S. stock market on Monday.

Within technology, leadership came from computer hardware ($DJUSCR), home of Apple (AAPL), and internet stocks ($DJUSNS).  After printing a negative divergence, the DJUSCR consolidated for a few weeks before breaking out yesterday.  This action in computer hardware tells me that AAPL will deliver a big report tonight after the bell.  It could be a "buy on rumor, sell on news" type of reaction, but I fully expect AAPL to deliver solid results for the market.  Take a look at the DJUSCR: 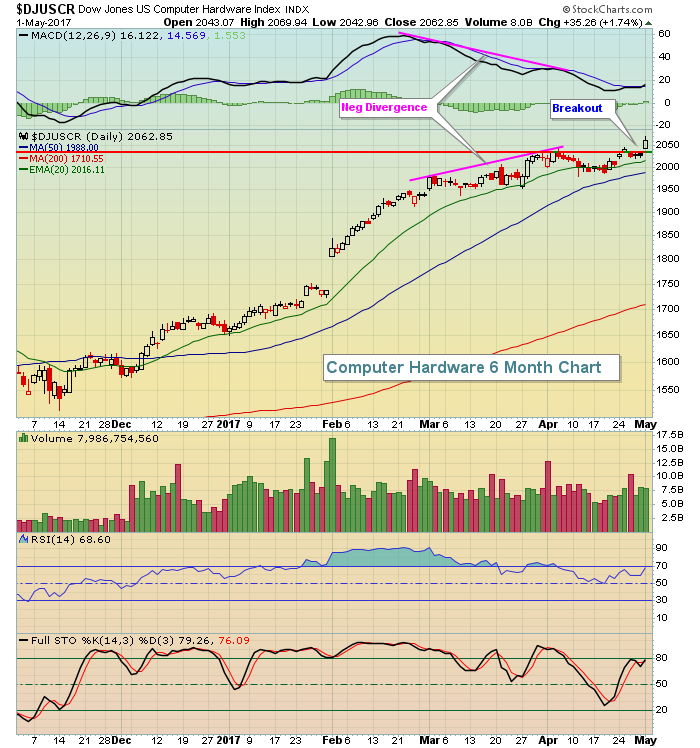 If there's one negative in the chart above, it's that volume didn't accelerate on the breakout as I would've expected.  Even if we see a pullback after AAPL's report tonight, I'd remain very bullish this group overall with short-term weakness providing an opportunity for entry.

Traders have lots on their minds this morning.  The Federal Reserve begins one of its eight meetings this morning with its policy decision due out at 2pm EST on Wednesday.  Apple (AAPL) reports its latest quarterly results after the closing bell today and we have the ADP employment report on deck for Wednesday morning while the government's nonfarm payrolls will be released on Friday.  Needless to say, it's a big week as the S&P 500 and Dow Jones attempt to follow the lead of the NASDAQ into record territory.

Financials will likely be the key this week as interest rates will be in focus on several different fronts.  The 10 year treasury yield ($TNX) appears to have broken its downtrend that began after a failed attempt to clear 2.62% yield resistance in March.  Nonfarm payrolls show a consensus of 185,000 for Friday.  After last month's disappointing number, it'll be important that we see strength resume.

The London Financial Times Index ($FTSE) made a long-term breakout that I had featured in prior months after the FTSE cleared previous index highs established in 1999, 2007 and 2015.  Taking out a top like that is extremely bullish and, as a result, I stated my belief that we'd see an extended period of bullishness over the next several years.  The daily chart could be construed as a topping head & shoulders pattern, however.  These types of patterns do not confirm until neckline support is lost.  I don't believe it'll happen, but here's the visual: 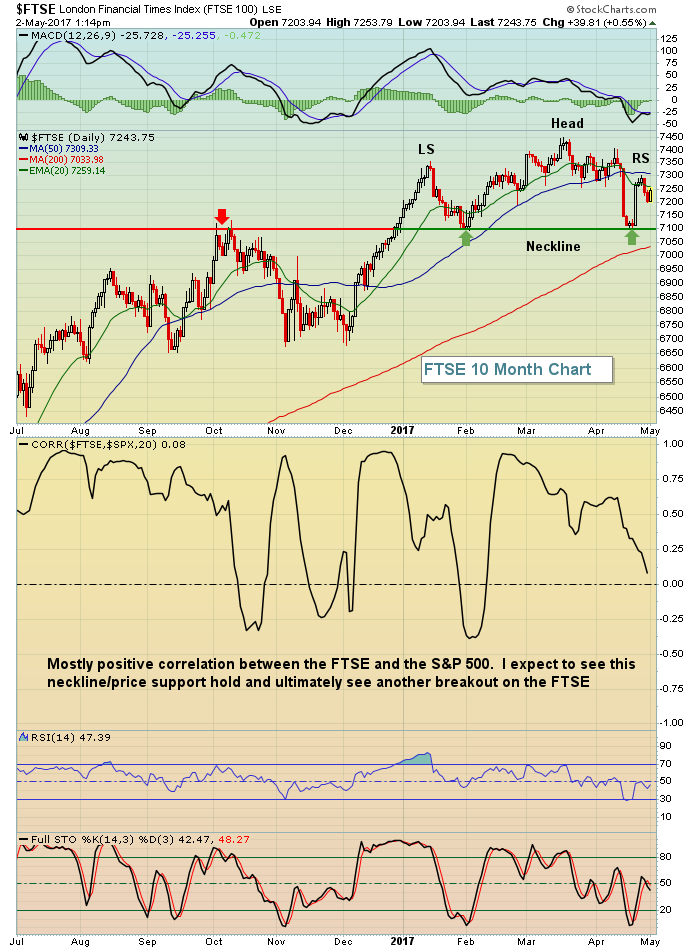 Note that the neckline formed exactly at price support near 7100.  A break below 7100 should be respected and would cause a re-evaluation of the longer-term prospects.  Until/unless that happens, though, I'll stick with my bullish forecast for the FTSE.

The Dow Jones Media Agencies Index ($DJUSAV) has been one of the worst performing industry groups within the consumer discretionary (XLY) space.  But the XLY has begun to show very meaningful relative strength vs. the S&P 500 while the DJUSAV has lagged its peers within the XLY badly.  Here's the current view: 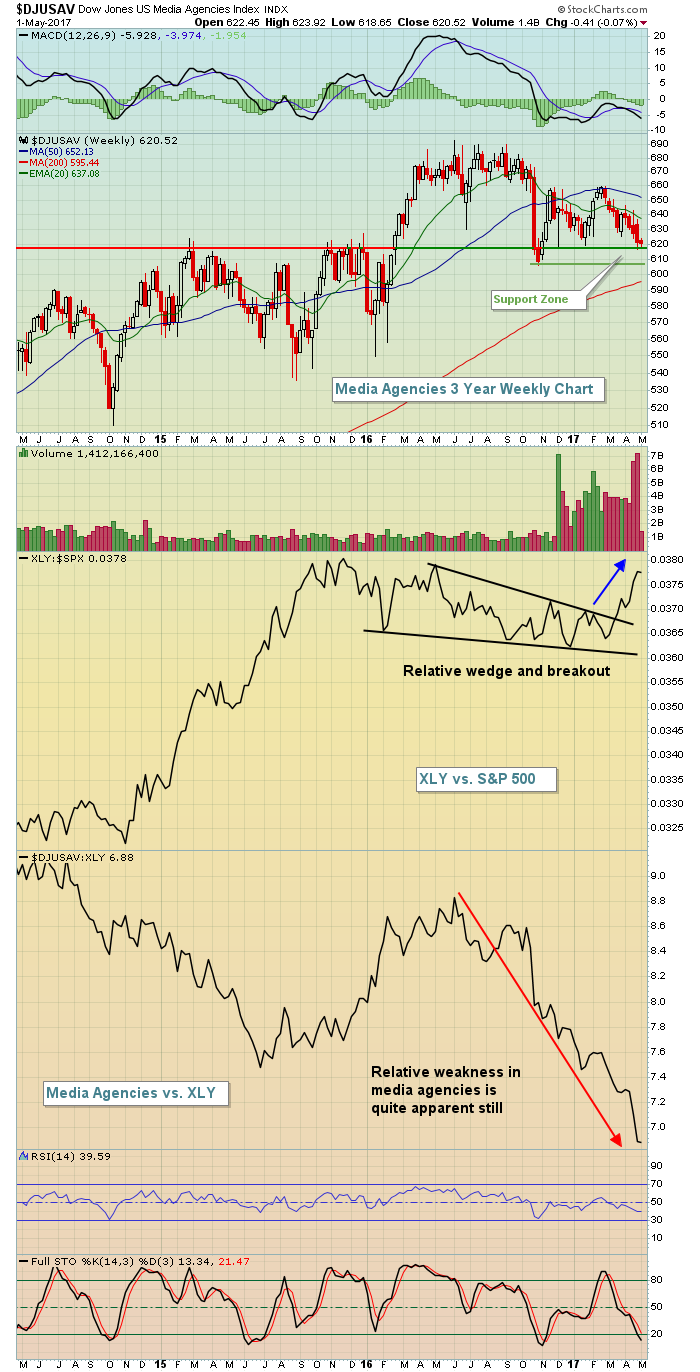 While I'd normally look elsewhere because the DJUSAV is such a major underperformer, the current price level is where this index could launch.  I'd be careful if the support zone in the 608-618 fails to hold.  But this is a solid zone to give this group a shot to reverse.  Interpublic Group (IPG) is one of the better known, larger cap stocks in this space.

Yesterday, I showed the historical strength on the NASDAQ during the first week of May.  Here's how the first five days of May have performed on the Russell 2000 since 1987: