Dow Holdings (DOW, -3.83%) and Boeing (BA, -3.69%) weighed on the Dow Jones ($INDU, -0.47%) on Thursday, but this index of conglomerates still managed to outperform its major index counterparts. The big technical issue with DOW is that it ran into key overhead price resistance and sellers lined up like we saw in May and June: 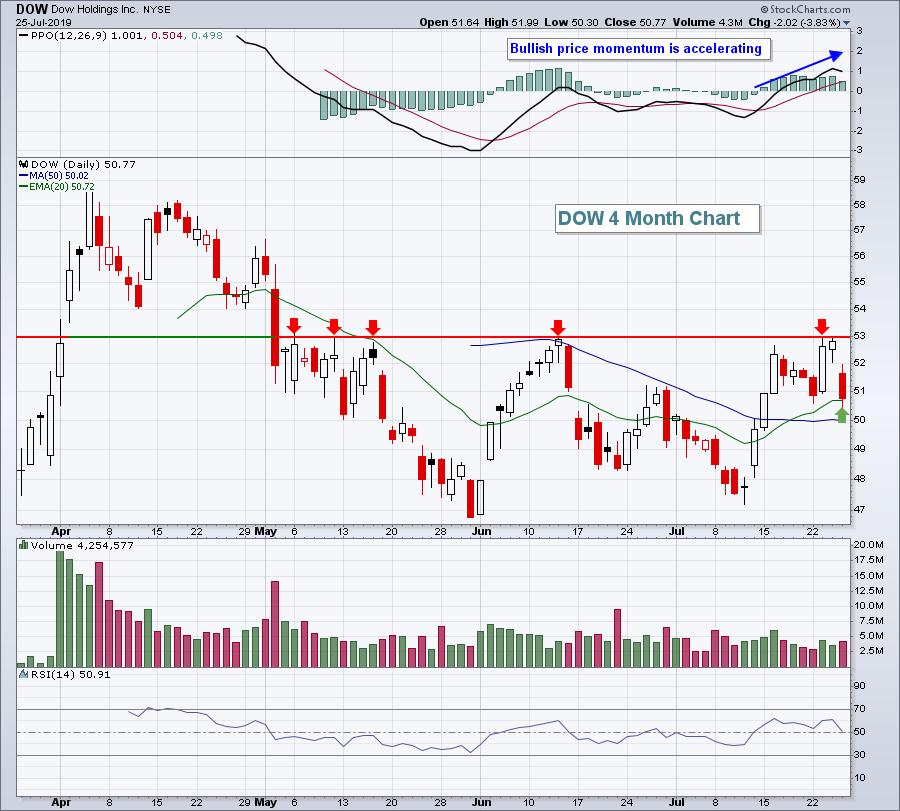 A close above 53 would do wonders for DOW technically. Its PPO is very bullish and yesterday the selling was contained at the rising 20 day EMA. It's trapped between price resistance to the top and the rising 20 day EMA to the bottom. Which one breaks first? We'll soon find out. As for BA, it was another quarter of no guidance from management, along with a delay in its first flight target date for its 777X plane to early-2020. BA remains a relative laggard in the aerospace industry ($DJUSAS, -1.47%) so I'd continue to avoid it.

The NASDAQ ($COMPQ, -1.00%) was hit particularly hard yesterday as Align Technology (ALGN, -26.99%) came up well short of its quarterly revenue and earnings targets and then provided very weak guidance in the quarter ahead....and for its fiscal year. It was a reality check after so many companies had reported strong earnings and forecasts.

The European Central Bank (ECB) took no new measures, but President Mario Draghi signaled that the ECB wanted to increase inflation, suggesting that the central bank is prepared to lower rates to do so. That is a bullish signal for the U.S. Dollar Index ($USD) as it pushed higher once again on Thursday. It also puts pressure on Fed Chief Jerome Powell to remain dovish to keep the dollar in check. All of this is a very bullish development for U.S. equities as we push forward throughout the second half of the year.

Amazon.com (AMZN) disappointed traders last night by missing its earnings expectations, but there were several excellent quarterly reports to atone for AMZN's mistake. Intel (INTC) will likely light yet another fire another the semiconductor group ($DJUSSC) after a huge report. Starbucks (SBUX) didn't fail its stakeholders either as restaurants ($DJUSRU) should perform well after SBUX blew away its estimates. Throw in a shocking (to me) beat by Alphabet (GOOGL), and we'll likely see internet stocks ($DJUSNS) lead communication services (XLC) to an all-time high. See the Current Outlook section for a chart of the XLC.

U.S. futures are bright green after the solid earnings reports from last night, especially those mentioned above. Dow Jones futures are set for roughly a 70 point advance on the open and NASDAQ futures suggest an even better start to its day - on a percentage basis. Q2 GDP was released this morning and while it was weaker than Q1, it did beat consensus estimates (2.1% vs 1.9%). It's really a win-win for U.S. equities as it confirms slowing growth to keep the Fed dovish, but it's still solidly positive.

Overnight, Asian markets were mixed, but there's more buying in Europe this morning. Crude oil ($WTIC) and gold ($GOLD) are both up slightly, while treasuries are mostly flat.

The communication services sector (XLC) is ready to join the "all-time high" party and it could happen today. Both Alphabet (GOOGL) and Twitter (TWTR) are up sharply in pre-market action after strong quarterly results were released. GOOGL and TWTR are up by 8% and 5%, respectively. We're going to need approximately a 2-3% jump in the XLC to forge to new highs: 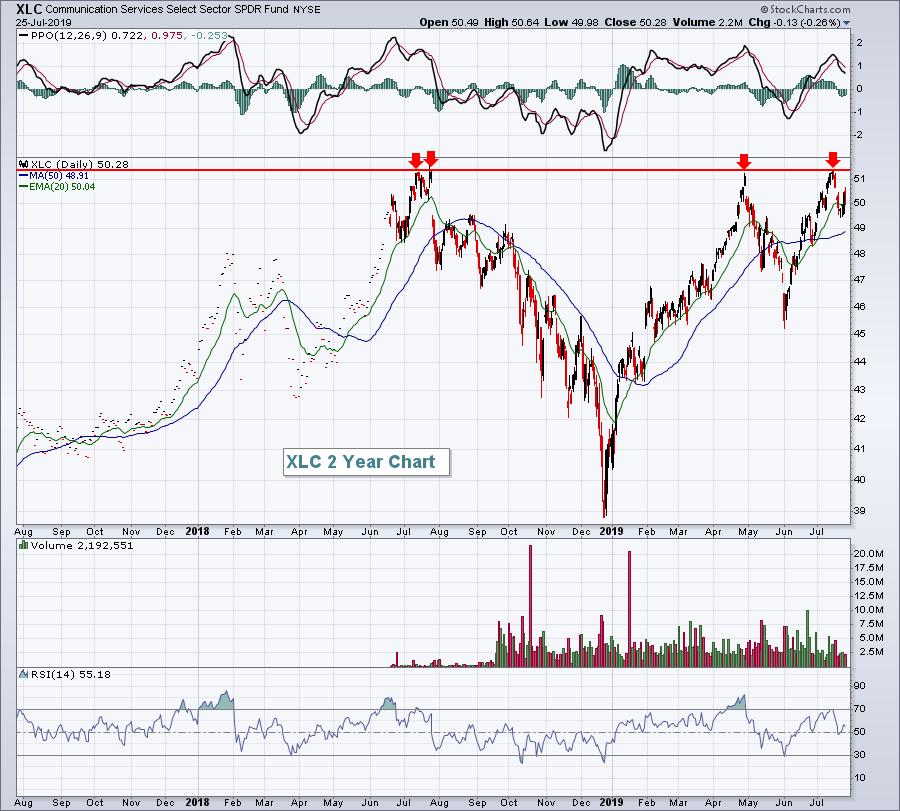 Note that the RSI is only at 55, so the XLC is nowhere near overbought. If we get a lift today and the XLC makes fresh new highs, gains could accelerate.

I've been mentioning internet stocks ($DJUSNS), so why not take a look at the group, right? Do you remember GOOGL's last earnings report? It was a travesty with a massive gap lower that left technical damage glaring on the DJUSNS chart: 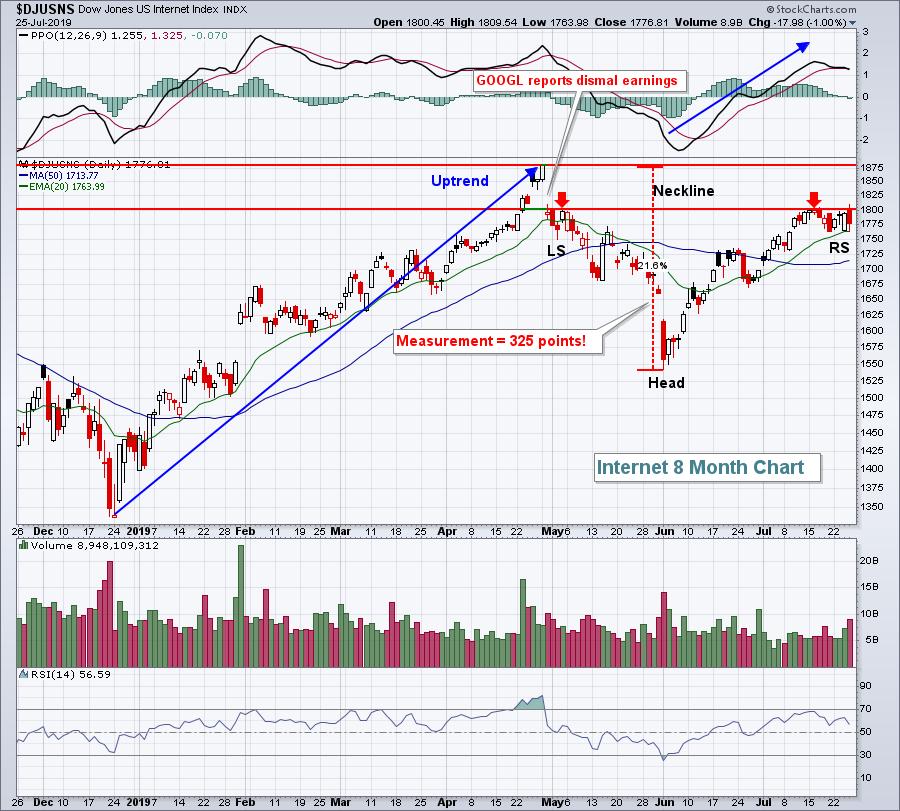 Well, last night GOOGL came through for the group and is up nearly 100 points in pre-market trading. It's going to help the group fill that April gap. But better than that, we're in a very bullish longer-term inverse head & shoulders continuation pattern that measures a whopping 325 points! A breakout will be no small deal. The DJUSNS is likely to go from an "avoid" to a "strong buy" on the heels of stellar earnings reports. That's how it works on Wall Street.

On Monday at 4:30pm, I'll join John Hopkins at EarningsBeats.com for a Q2 Earnings Webinar. I'll discuss the best earnings reports this quarter and point out the stocks you'll want to trade in the weeks ahead. By joining for a month trial, you'll also save yourself a seat to the biggest webinar of the year, my "Top 10 Picks" webinar in August where I'll unveil the 10 stocks that will be equally-weighted for 90 days in my Model, Aggressive and Income Portfolios. These portfolios are designed to crush the benchmark S&P 500 and have been doing so since their respective inception dates. I'll be discussing the strategy in picking those stocks at Monday's webinar as well. Join me! For more information, CLICK HERE.

Wednesdays and Fridays have been the best performing calendar days of the week on the S&P 500 since 1950.