Our major indices were down throughout much of Friday, attempted to rally in the afternoon, and then another bout of selling kicked in as all major indices finished with losses. Leading to the downside were the more aggressive Russell 2000 ($RUT, -1.25%) and NASDAQ ($COMPQ, -1.00%). Aggressive sectors were also hit on a disproportionate basis, with technology (XLK, -1.13%) and communication services (XLC, -1.12%) lagging. Energy (XLE, -1.10%) simply can't catch a break either as a weakening global economy, falling crude oil prices ($WTIC), and a rising dollar environment have all taken a toll on the group. Check out this chart: 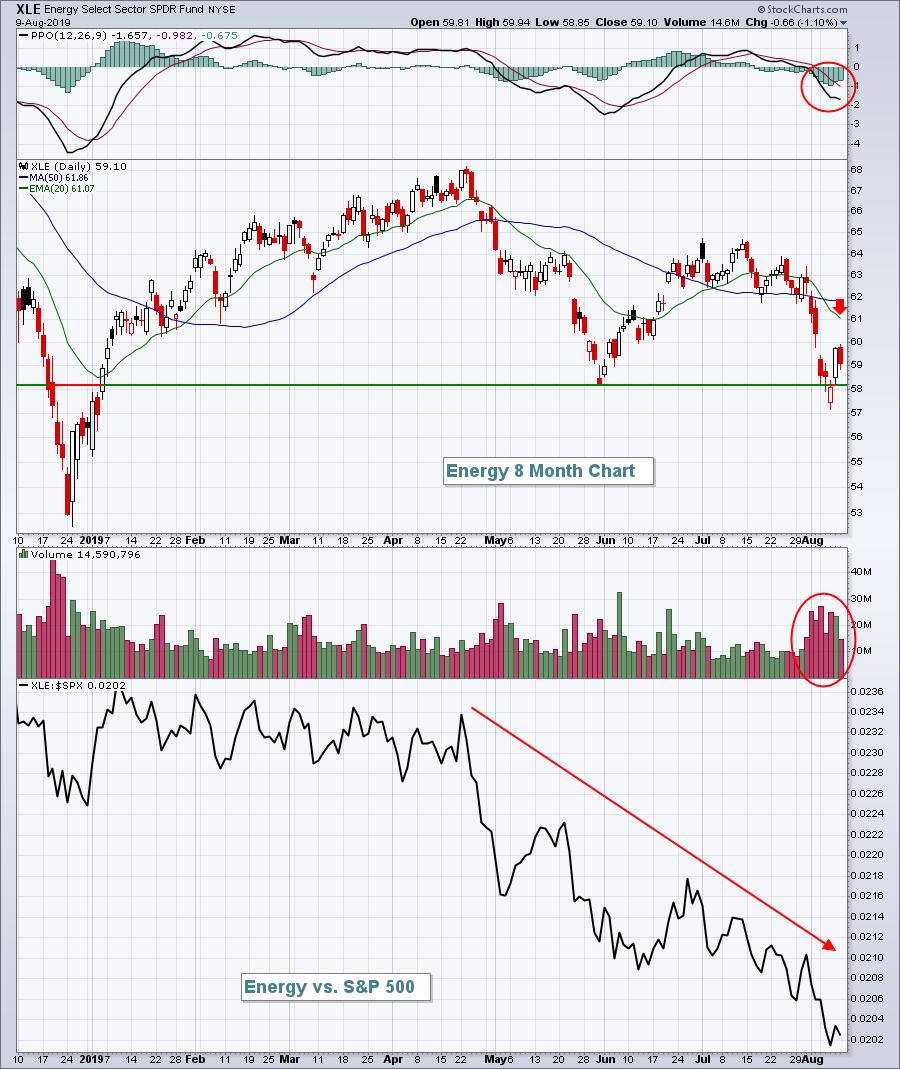 XLE's low last week challenged the lows in the first week of 2019. Yes, we've seen a bounce the past couple sessions, but it's been a weak bounce. Volume trends here are horrible and the relative weakness is apparent. Continue to avoid everything energy, with the one exception being renewable energy ($DWCREE), which has been the best industry group of 2019. You can check out the relative strength there in the Sector/Industry Watch section below.

Uber, Inc. (UBER, -6.80) tumbled after reporting a $5 billion loss and missing its revenue estimates to boot. DXC Technology (DXC, -30.47%) cut its FY20 outlook, while Dropbox (DBX, -12.81%) fell precipitously despite beating estimates as to both revenues and EPS. Relative strength is a solid indicator, however, and it would have kept us out of all three stocks: 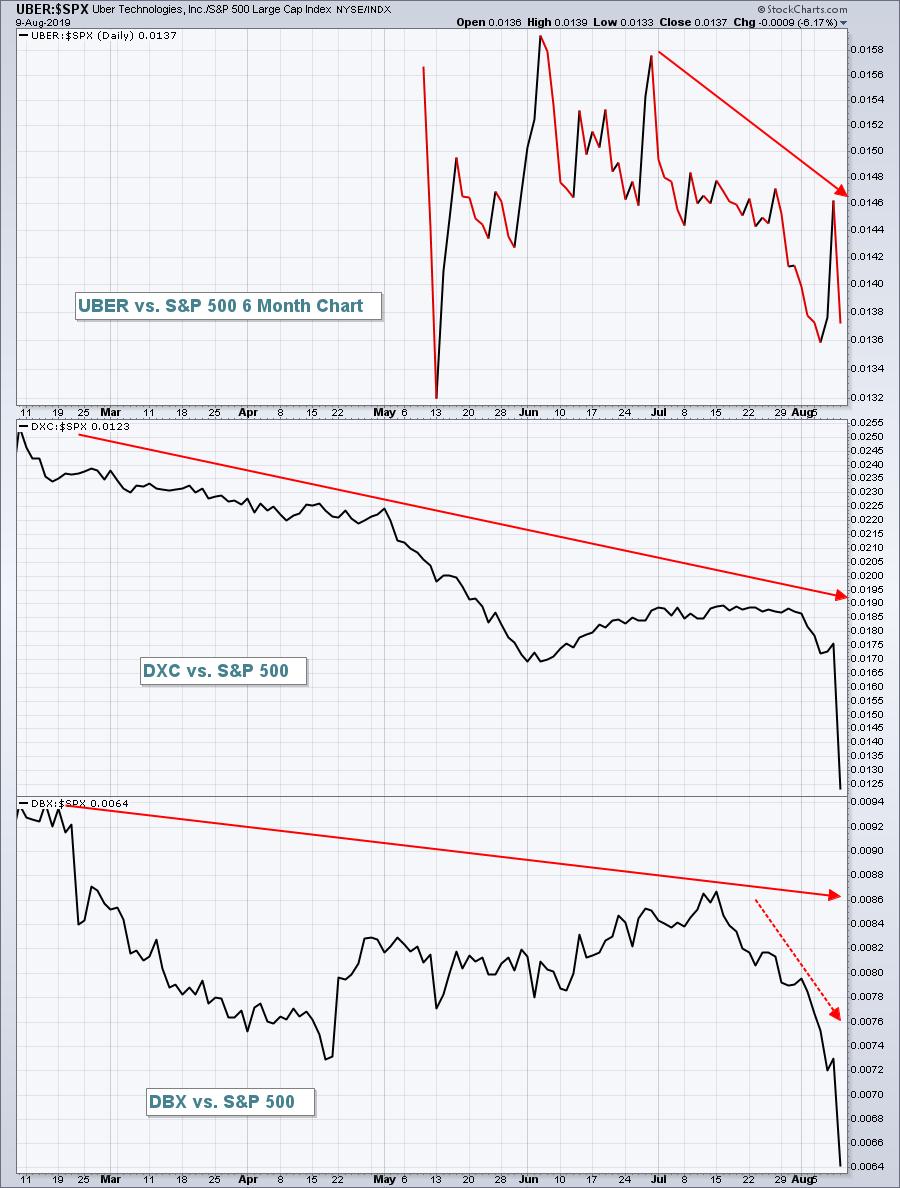 Something had apparently leaked on DBX as the relative strength there collapsed just ahead of its earnings report. Relative strength is one of our best clues as to impending news and it's why it's a primary focus in developing my three portfolios. Again, be sure to join me for this afternoon's webinar if you can. It'll be an eye opener.

Asian markets were mixed overnight, while Europe is on the defensive. The 10 year treasury yield ($TNX) is down 3 basis points as the flight to safety continues as a new trading week begins.

Dow Jones futures are lower by just over 150 points with less than 30 minutes to the opening bell.

Banks ($DJUSBK, -0.30%), despite tumbling treasury yields, have actually held up quite well. The yield curve is nearly inverted, which in the past has preceded recessions. But nearly every major bank has passed its recent stress test and U.S. economic conditions are not signaling a recession. Jobs remain strong and they've tended to slow considerably in the past just before a recession. I'm just not seeing a major problem ahead. Here's the bank weekly chart: 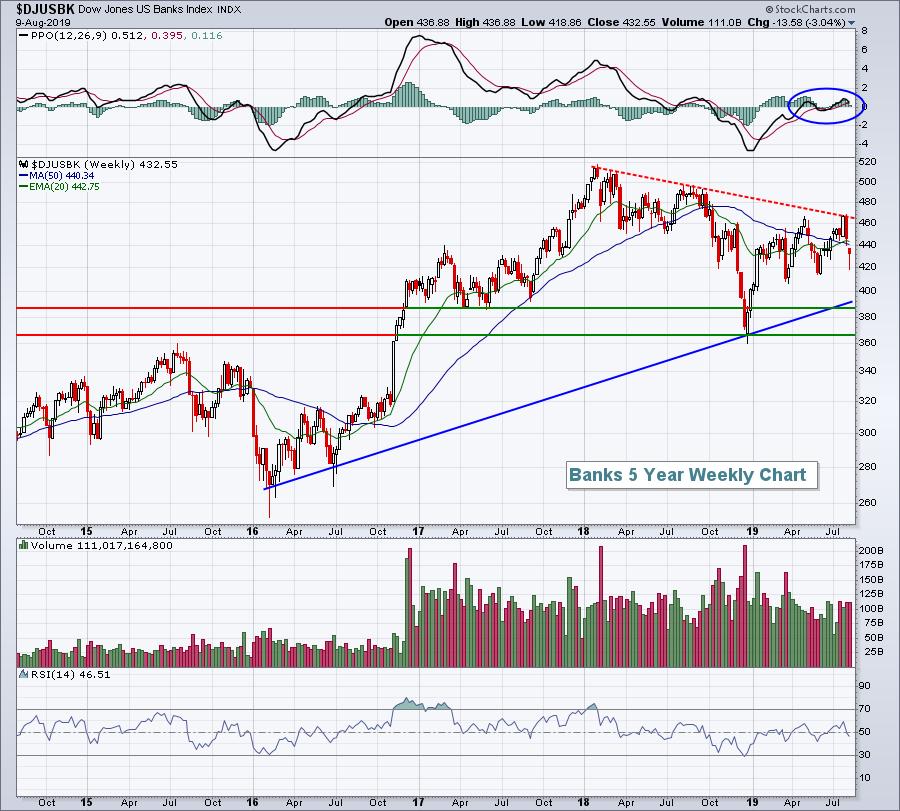 I see an uptrend and perhaps consolidation in a symmetrical triangle. The weekly PPO is stalling near its centerline, which is perfectly normal during a consolidation phase. Considering the huge decline in treasury yields, my analysis suggests this chart remains quite healthy. Just remember that banks rarely lead bull markets, but we do want them to participate on an absolute basis and they've certainly been doing that.

Renewable energy ($DWCREE) remains very strong as incredible growth in revenues and earnings has supported a doubling of this index since the beginning of the year. Here's a 3 year weekly chart that shows a recent breakout above the 2018 high and the incredible outperformance of the group relative to the S&P 500: 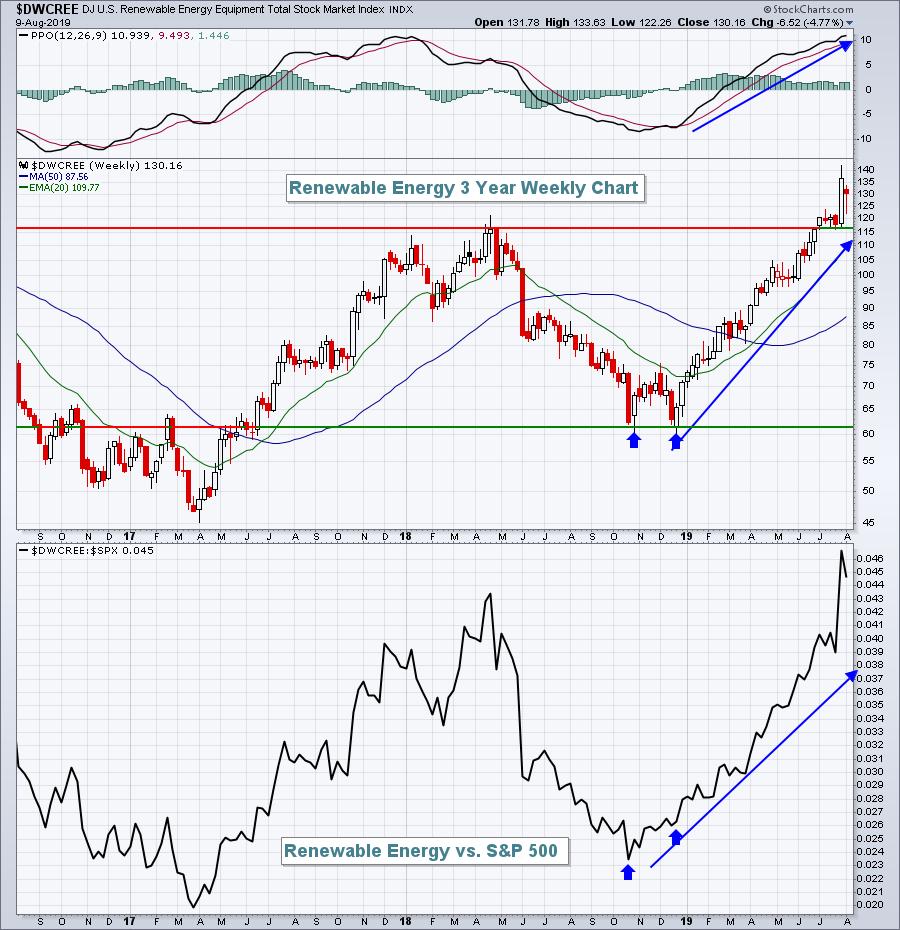 Check out those blue arrows. The DWCREE did provide a clue that its relative strength was kicking in long before the huge run up in price. In December 2018, the S&P 500 moved to fresh lows, but the DWCREE did not. That's reflected not only in the price chart above, but also in the improving relative strength seen at the bottom of the chart. That preceded the huge relative uptrend in 2019.

I might be a little early to the party, but I like Veeva Systems (VEEV) here. It's part of a very strong software group ($DJUSSW) and it's been pulling back close to a key price support level. It's relative strength vs. its software peers remains fairly strong as well: 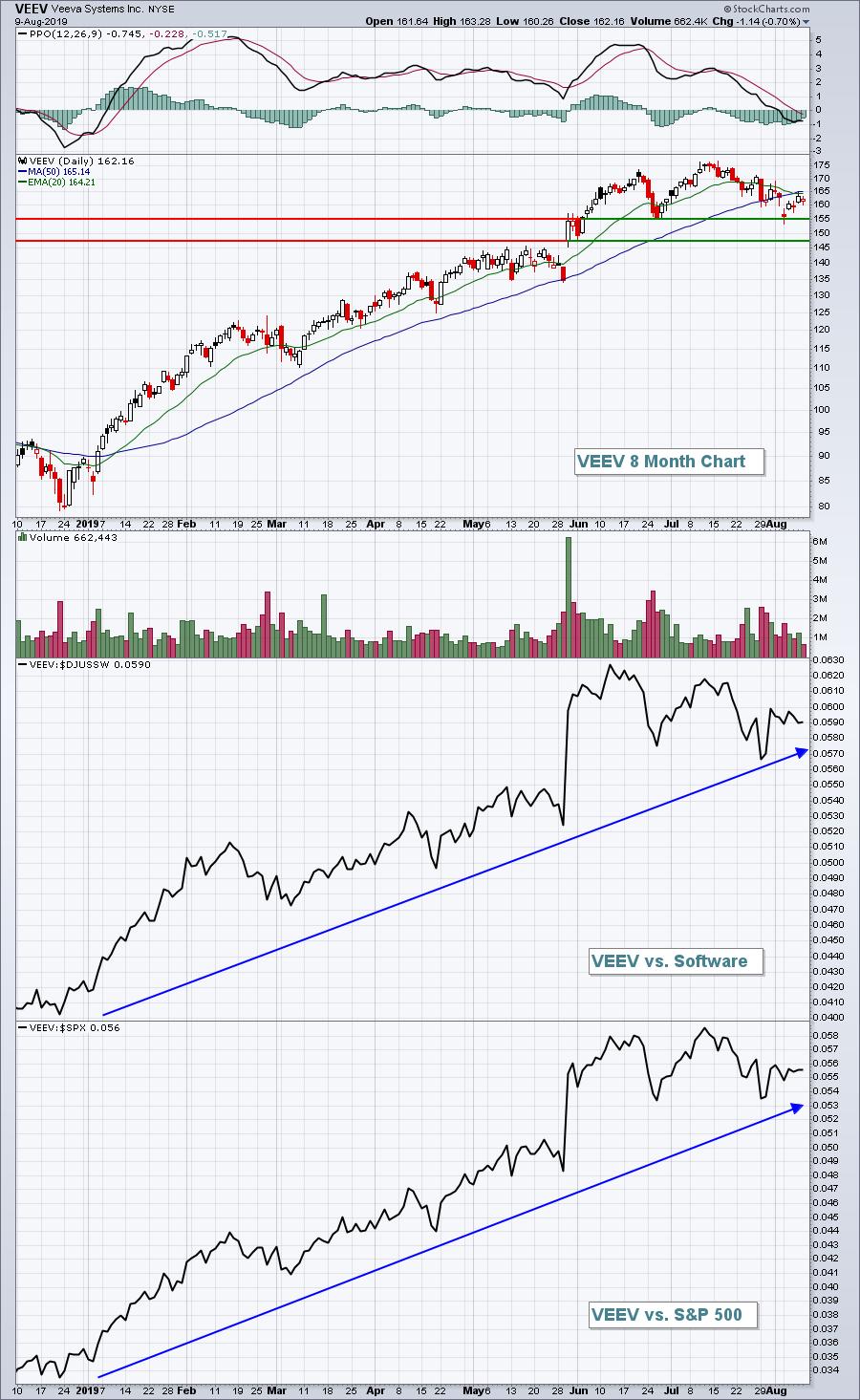 Consider entry between current price and 155, a level of price support that has held twice in the past two months. A stop could be considered on a close beneath 145-147 with an initial target at 176, although I believe it'll go higher.