Trying to predict how Wall Street might react to an earnings report is no simple task. Sometimes, a stock has a big run into its earnings report, but then sells off after delivering solid results. It's the old adage, "buy on rumor, sell on news." In my experience, it pays to listen to what Wall Street is saying BEFORE the news comes out.

Every quarter, we have a quarterly earnings webinar where I point out what I believe are the strongest and weakest companies as they speed towards their earnings confession. Earlier this week, we had our "Q2 Earnings - Sneak Preview" event and I looked only at stocks that were reporting quarterly results this week. Last night, earnings were not good and neither were their reactions. 3 of these stocks, however, were stocks I cautioned about, because their relative strength was very weak as they approached earnings. Here they are, in no particular order:

After the bell yesterday, COF reported revenues and EPS that BOTH fell short of Wall Street expectations. I wasn't at all surprised. Take one look at the COF daily chart: 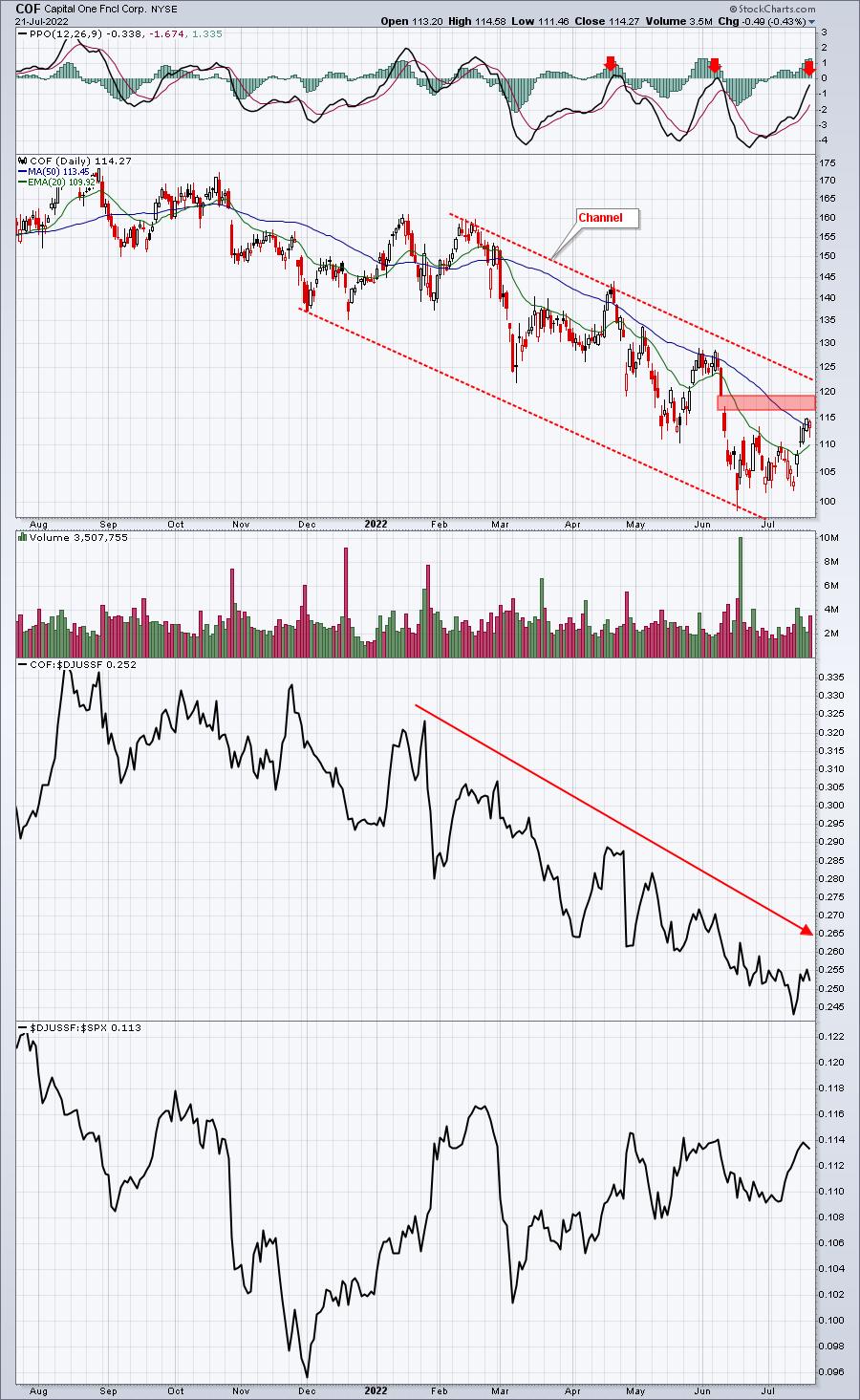 Gap resistance, the down channel, and PPO centerline resistance were all reasons to be cautious technically, but it was the consistent downtrend in relative strength that made me most cautious. Wall Street firms regularly meet with management teams and are able to differentiate between the strong and weak companies within an industry group. Relative strength is, in a way, a report card that summarizes how companies and their management teams are performing. When I see a downtrending relative strength chart like COF's, I can't help but believe that a shoe is about to drop. Last night, COF dropped a couple shoes and it's trading down roughly 5% in pre-market action.

Like COF, SNAP also hit the daily double -- in a bad way. It, too, fell short of both revenue and EPS estimates, announced a reduction in its hiring rate, and avoided future guidance altogether. Several analysts downgraded the stock after the earnings were released. Based upon the stock's very poor relative strength, I'd say Wall Street firms have consistently been selling this stock for months: 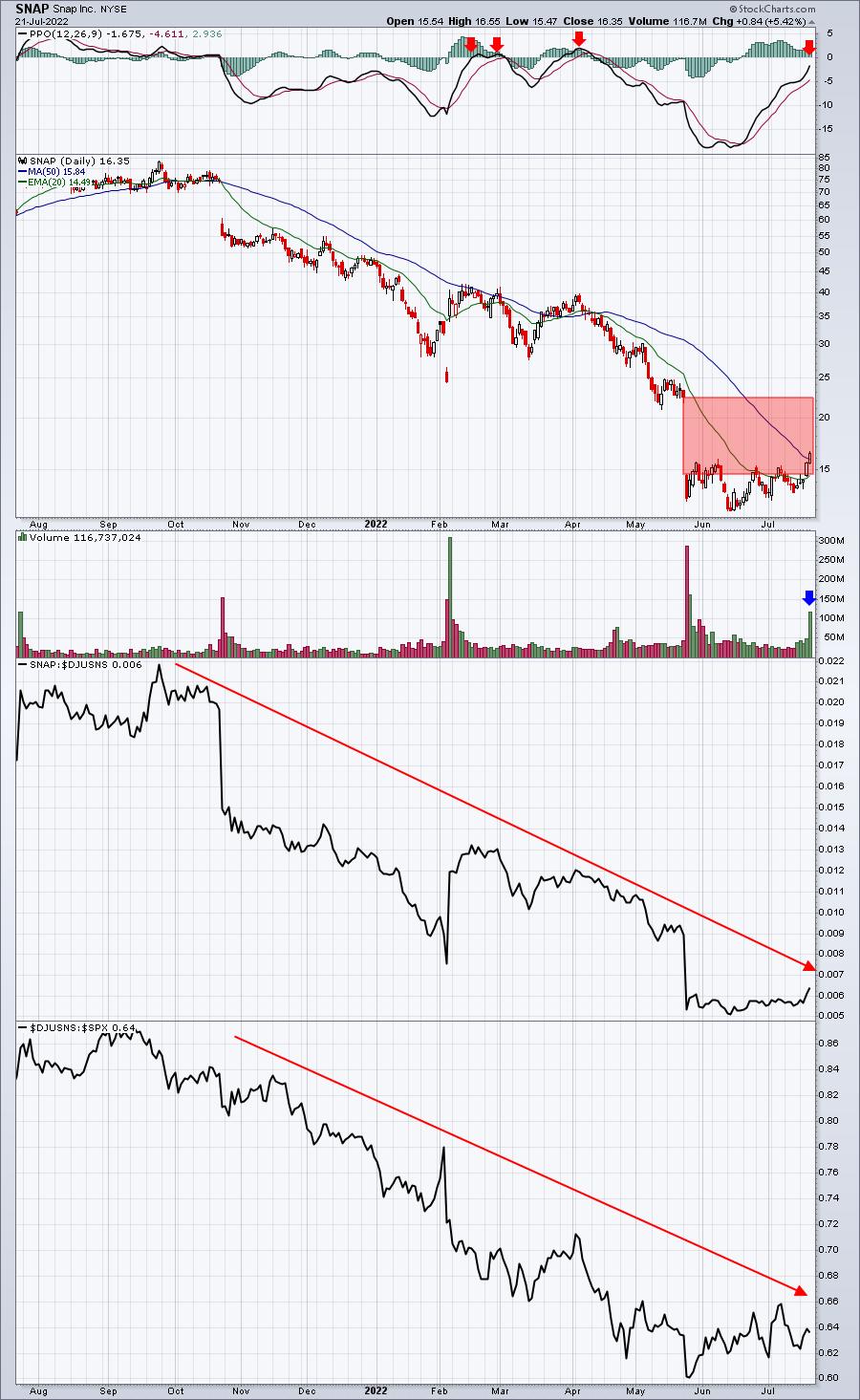 The blue arrow marks the big volume that accompanied SNAP's nice day on Thursday as it approached its earnings report. I've heard traders say, "oh, someone must know something!" and then they proceed to buy the stock ahead of earnings. Big risk and big mistake. I'm not just saying that because SNAP is down 33% in pre-market. I'm saying it because Wall Street has been bailing on SNAP for almost a year. It's an awful relative performer in a poorly performing industry group -- internet ($DJUSNS). Wall Street's not buying, so why should we expect a great earnings report? SNAP is a dumpster fire.

Once again, we have a company that reported revenues and EPS below expectations. We should have seen this coming: 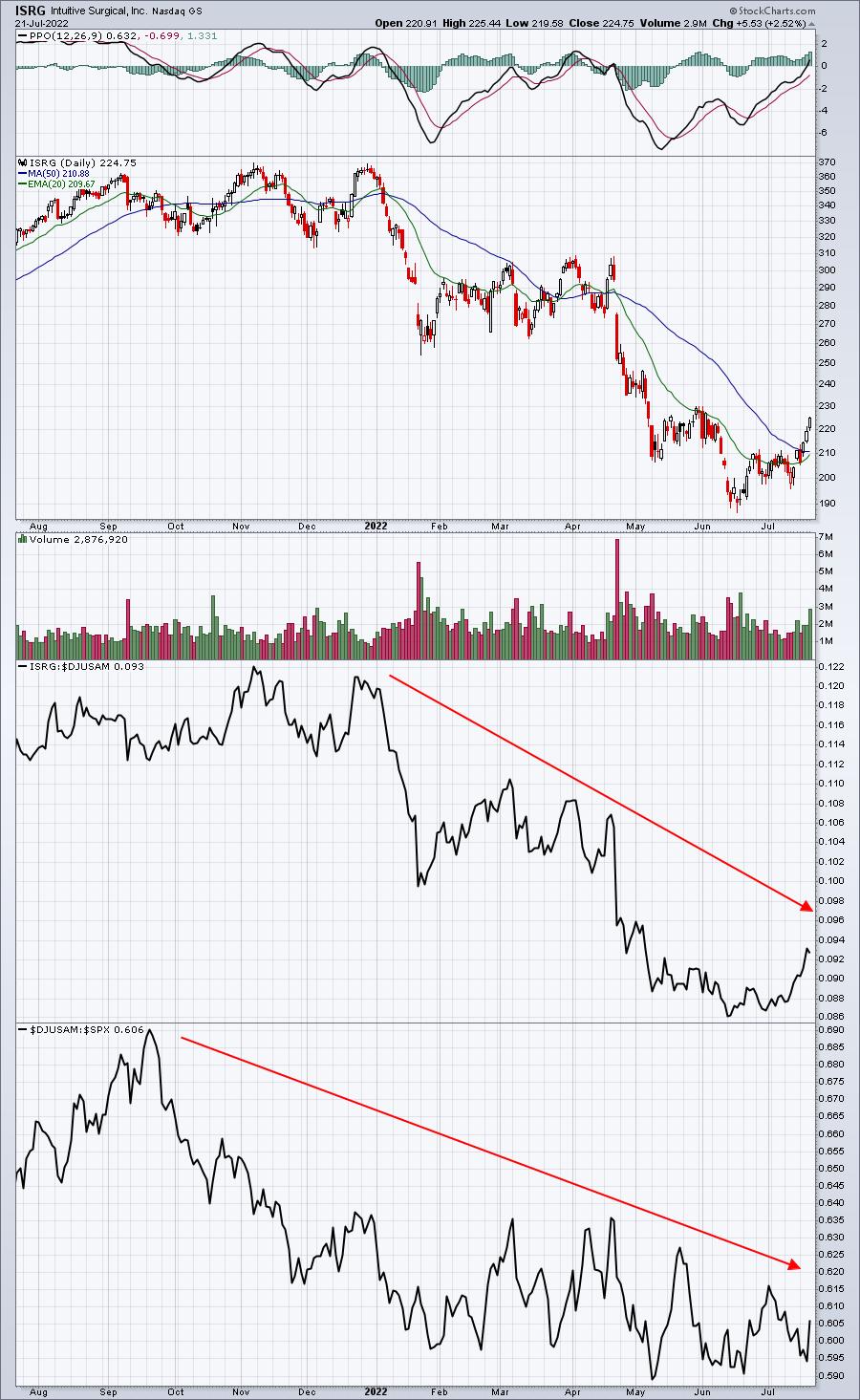 Some technicians might point to price action moving above its 50-day SMA as a signal of health. But we have to keep in mind that the overall market environment has improved substantially. Since the stock market bottomed in mid June, the S&P 500 has rallied more than 10%. It's a "rising tide lifting all boats" kinda thing. Relative strength tells us what Wall Street truly believes about the company and ISRG's relative strength has been tumbling throughout 2022. There'll be a time to buy, but just before earnings wasn't the time.

Listen, holding ANY stock into earnings is incredibly risky. I've seen stocks with excellent relative strength lay an egg. There's a human element to all of this and sometimes management teams simply aren't honest with Wall Street throughout the quarter, believing they can turn things around. But over the years, I've found that nothing works better than relative strength in terms of providing us key clues about upcoming earnings reports.

On Monday, in my FREE EB Digest newsletter, I will be providing a very well-known company that's likely to be massacred after its upcoming earnings report. I can promise you this - there's ZERO chance I'd hold into its earnings report. If you'd like to receive this article on Monday, and you're not already an EB Digest subscriber, simply CLICK HERE and enter your name and email address. There's no credit card required and you may unsubscribe at any time!