It's no secret that I've turned very bullish. I stuck my neck out and made my bullish call on June 16th -- right at the bottom. I've seen absolutely nothing to change my mind since that bottom. The biggest question to me is whether we pause and consolidate over the next few weeks or if the stellar 2-month rally continues. I'd bet on the latter, given the history of cyclical bear market bottoms. I'm seeing more and more technicians say that they believe the bottom is in now and will buy pullbacks. Well, here's the pullback.

The next phase of this bull market could be every bit as explosive as what we've just witnessed. I'm still waiting for further participation from a couple key technology industry groups; they've moved higher off the bottom, but they haven't been leading on a relative basis.

The two groups are semiconductors ($DJUSSC) and software ($DJUSSW). Here's what I'm seeing on the two charts: 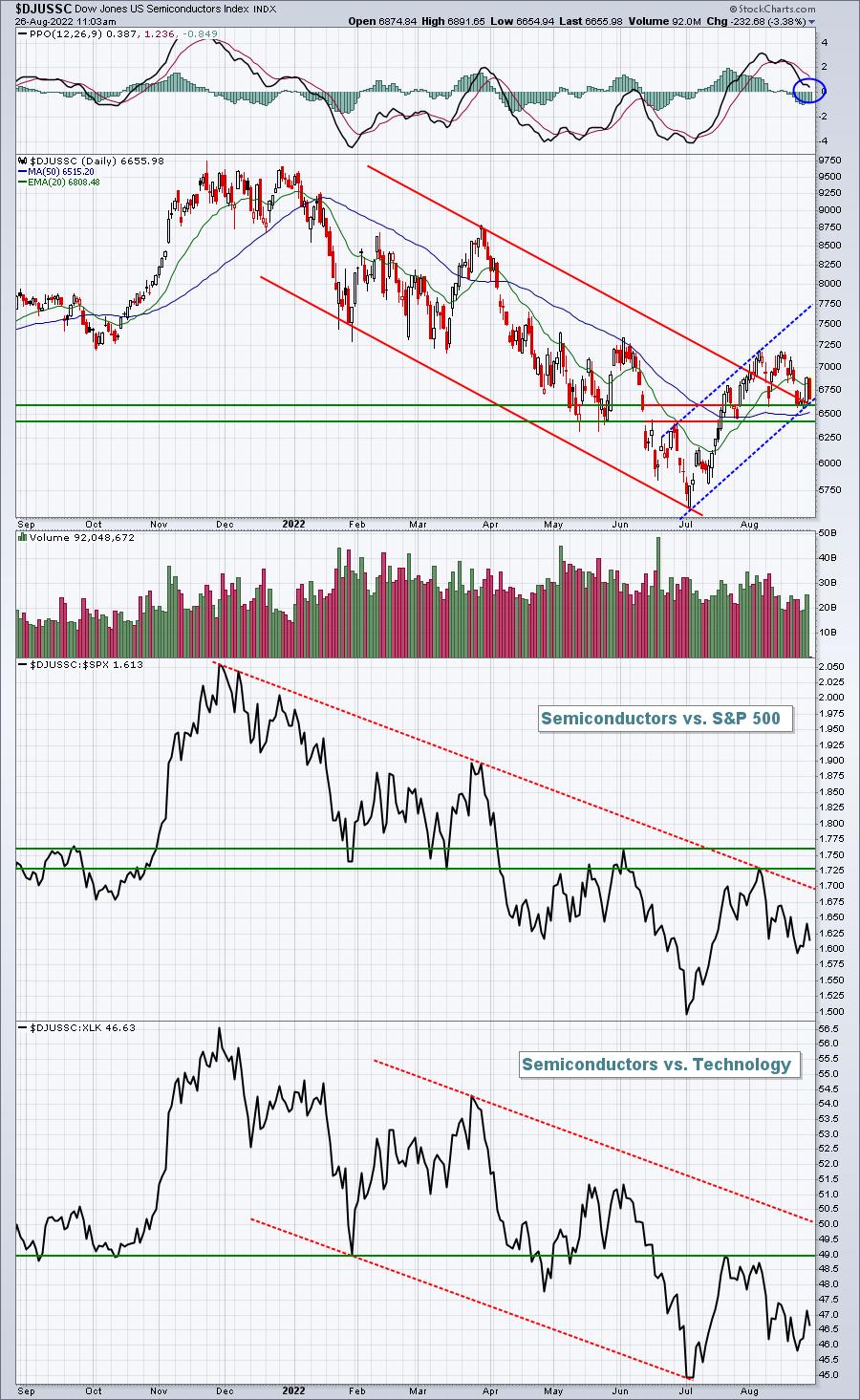 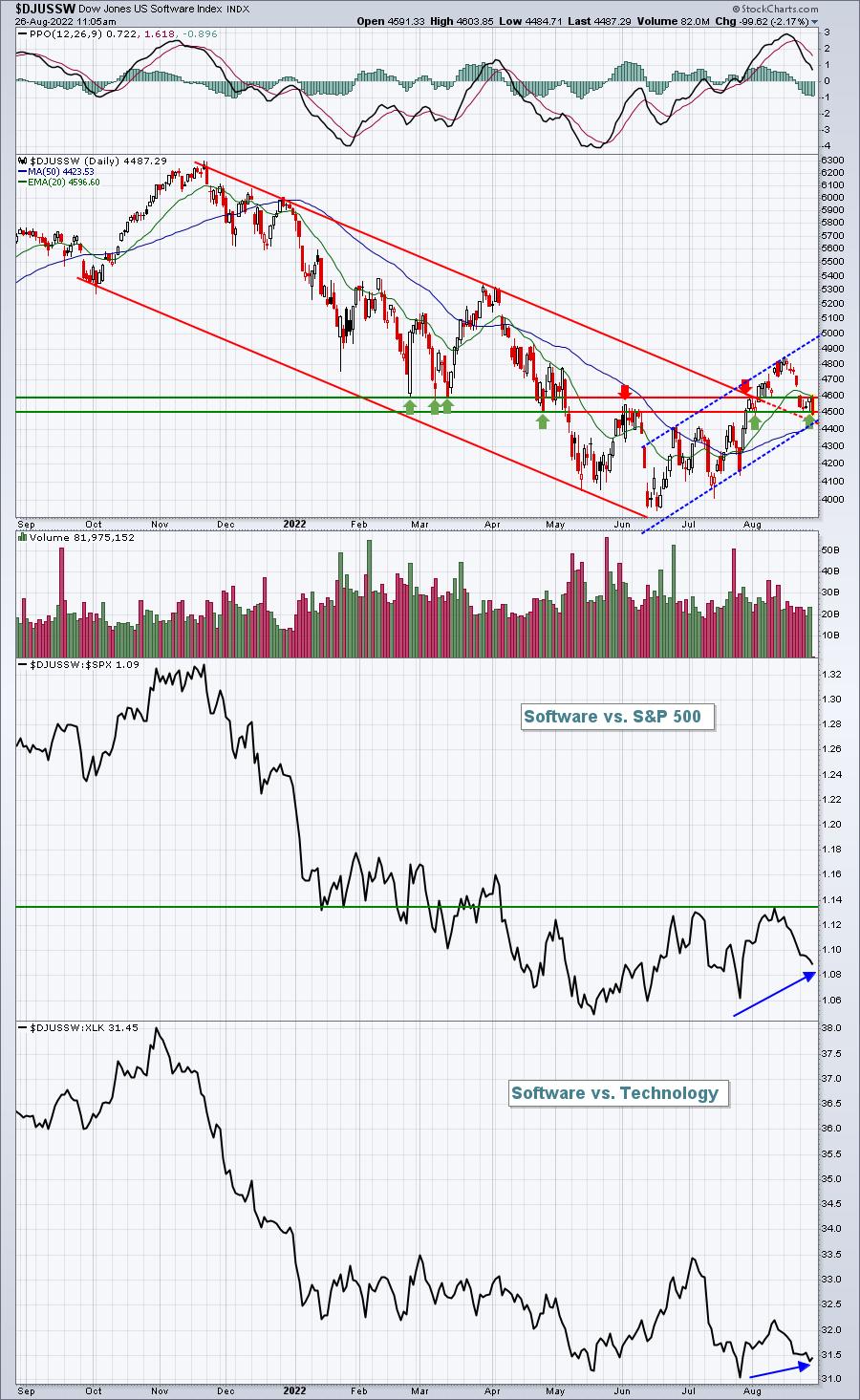 Software is showing more signs of strength than semiconductors, but both have improved off the June bottom -- certainly on an absolute basis. On a relative basis, I've drawn a few overhead resistance lines based on relative price and channel action. If those levels are cleared, I'll be looking for explosive moves from these two industries. When that happens, it'll be CHECKMATE for the bears. For those in the bearish camp, a breakdown on the absolute charts below channel and price support would be an indication of further weakness ahead.

Listen, I hear all the talk and rhetoric about higher inflation and a hawkish Fed. Blah, blah, blah. I'm telling you -- follow the money instead. Are you in the camp that believes inflation is a BIG problem? Then take one look at these two charts and explain them please: 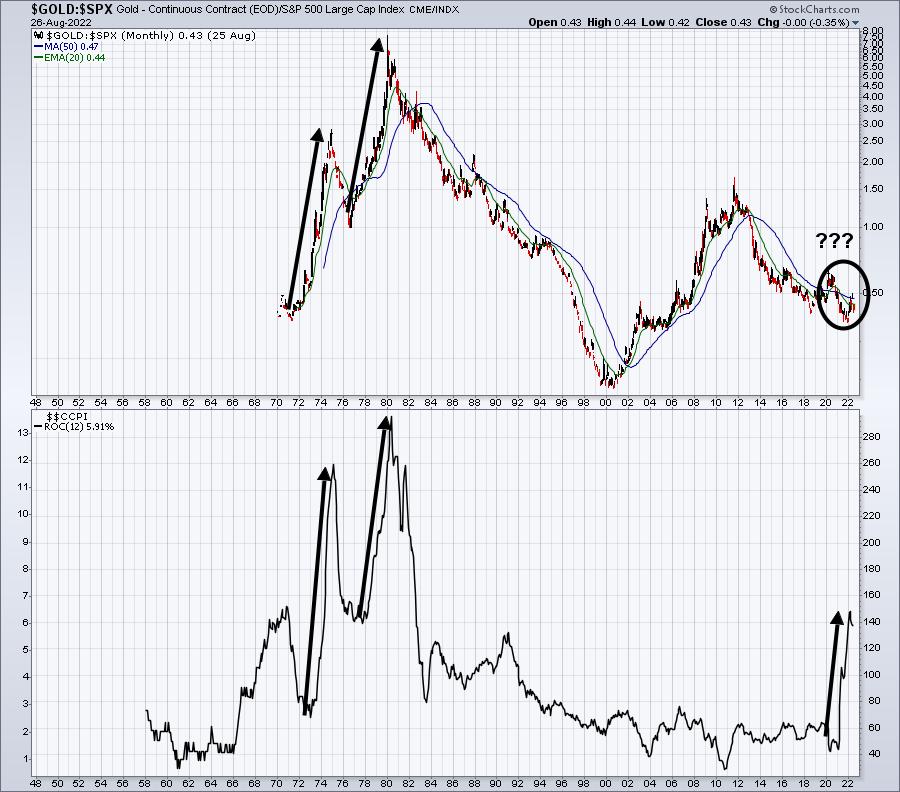 It's widely known that gold is a great hedge against inflation. It's crystal clear that Wall Street POURED its resources into gold in the 1970s. Investors did much, much better investing in gold than in the S&P 500. That ratio SOARING isn't talk, it's MONEY. Now look at the last two years. We're seeing a very similar trajectory in inflation. But where's the money going? Into gold? Ummm, I don't think so. Wall Street has many BRILLIANT minds. They're much smarter than I am. I'm never going to be as smart as many of them. But I can follow a chart. I can see where the money is going. AND IT AIN'T GOLD. 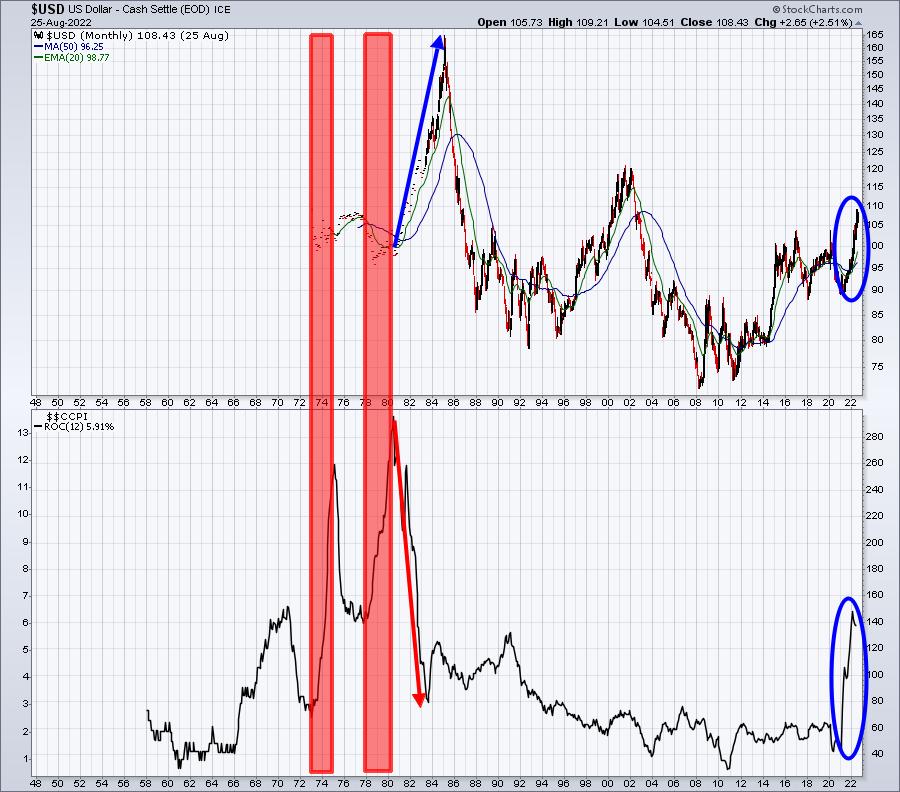 If there's one thing that will destroy a currency, it's inflation. While it's difficult to see the 1970s action in the $USD as inflation was soaring, it's quite clear what happened to the dollar when inflation was reined in. The dollar surged. As inflation has spiked the most in 40 years over the past 12-18 months, I have to ask myself why the dollar has moved to a 20-year high.

I know what the talking heads are saying "How can you avoid it?" It's everywhere with social media. You honestly can't escape it. What I'm asking everyone to do is to follow the charts and be willing to question what we're being told day in and day out. If inflation is a long-term issue, why isn't money rotating more towards gold? And why is the dollar rising? This makes ZERO sense based on what I've been taught over the years.

Could we be getting played by Wall Street? I'm asking for a friend.

Finally, I see the market taking a beating this morning based on Fed Chief Powell's remarks in Jackson Hole, giving back all of the gains from the past few days -- and then some. The Fed continues to talk tough regarding interest rate hikes. But I've been writing and posting videos about how opening gaps and market action during "amateur hour" (first 60-90 minutes) have meant little and how the true accumulation has been taking place in the afternoon. It'll be interesting to see if today's "morning distribution" is followed up with more selling in the afternoon. I'm guessing that it won't, but if it does, it certainly can change the market landscape -- at least in the near-term.

If nothing else, today's action will make our HUGE event tomorrow morning even bigger! I'll be hosting our "Where Does The Market Go From Here?" live virtual event on Saturday, August 27th at 10am ET. I'll discuss many of the manipulative actions I've seen in 2022 thus far and where I believe U.S. equities are heading for the balance of 2022 and into 2023. Thousands have registered already and you'll need to save your seat in order to attend. For more information and to register, CLICK HERE.

I hope to see you tomorrow morning!